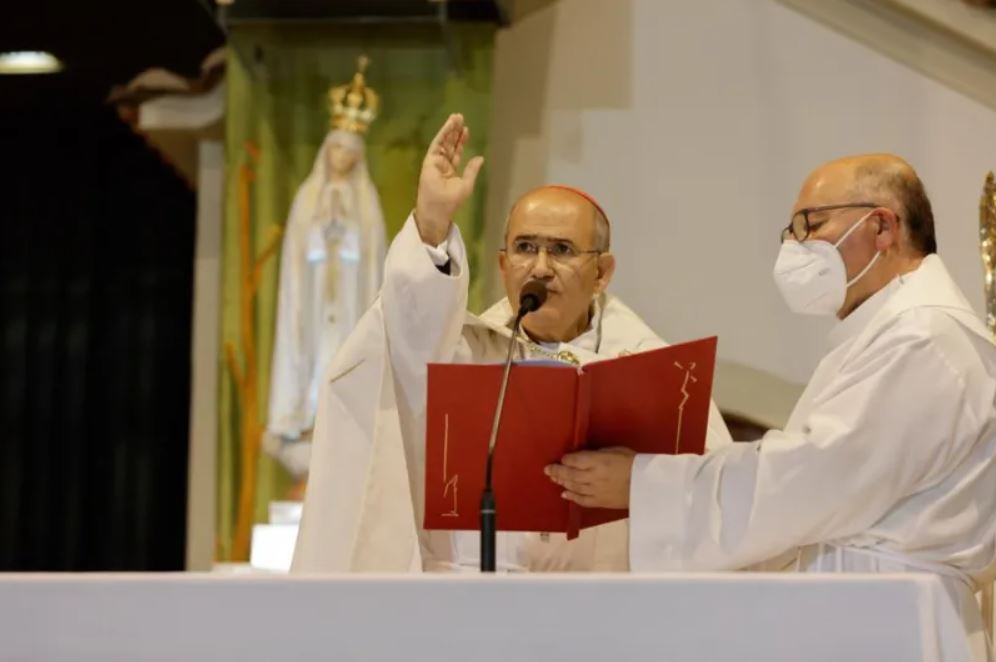 Cardinal José Tolentino de Mendonça presides at the evening celebration of the international pilgrimage to Fatima, Portugal, May 12, 2021. / Courtesy of the Shrine of Our Lady of Fatima.

A cardinal celebrating Mass at Portugal’s Fatima shrine on Thursday said that the world needs a “spiritual restart” as well as economic reconstruction after the pandemic.

Preaching on the May 13 feast of Our Lady of Fatima, Cardinal José Tolentino de Mendonça, archivist and librarian of the Holy Roman Church, said that a global financial recovery required an accompanying spiritual revival.

He said: “At this present crossroads of history, we cannot allow the revival of hope to coincide solely with the concern for the material expression of life. There is, no doubt, an urgent need to supply food, and this demanding task, which is essentially one of economic reconstruction, must unite and mobilize our societies.”

“But our societies also need a spiritual restart. We do not live without bread, but we cannot live only on bread. The deepest moments of crisis have always been overcome by infusing a new soul, proposing paths of interior transformation and spiritual reconstruction of our common life. This was the message of Fatima, in that distant year 1917, as the world was plunged into the first chemical war in history and one of the deadliest.”

The 55-year-old Portuguese cardinal was preaching at a Mass at the Shrine of Our Lady of Fatima on the anniversary of the day in 1917 that three shepherd children — Lucia dos Santos, Francisco, and Jacinta Marto — saw the first apparition of the Blessed Virgin Mary.

Addressing a reduced number of pilgrims due to coronavirus restrictions, the cardinal asked: “What did the Virgin ask to humanity, through the little shepherds? Prayer, penance, and conversion, that is, concrete means of interior reconstruction.”

As he preached, priests and pilgrims sat socially distanced in long rows as a breeze blew over the sanctuary.

With the wind tugging at his robes, the cardinal noted that Thursday marked the 40th anniversary of the attempted assassination of Pope John Paul II in St. Peter’s Square.

A year after the incident, on May 13, 1982, the Polish pope traveled to Portugal to thank Our Lady of Fatima for saving his life.

“Thirty-nine years ago, Pope St. John Paul II presided at this Eucharist ‘to thank Divine Providence in this place which the Mother of God seems to have chosen in a particular way’ that his life had been spared in the attack in St. Peter’s Square in Rome. And John Paul II’s appeal is that one should recognize in Fatima the preparation of a new spiritual time.”

He said: “The world, exhausted by this pandemic that is still going on, and which requires each one of us to be vigilant and responsible, is not only hungry and thirsty for normality: it needs new visions, other grammars, it needs us to take the risk to have dreams.”

“Especially to the young people, and to the young Portuguese who are preparing to welcome the World Youth Day in 2023, I want to say from Fatima: instead of being afraid, have dreams. Discover that God is the ally of your most beautiful dreams. Dare to dream of a better world. Feel that the future depends on the quality and consistency of your dreams.”

He continued: “And finally, I turn to you, dear pilgrims. And I want to tell you that I feel not only close to all of you, but truly consider myself one of you. The message of Fatima, seen from the outside, seems formatted and austere. And many, only seeing the surface of the shrine, see only the dramatic expression of so many tears, demands, and promises. But the pilgrims to Fatima experience that it is much more than that.”

Referring to the Gospel reading for the Mass, John 19:25-27, which was proclaimed in several languages, he said: “What we experience is that we come here restless, empty, divided, irreconcilable or thirsty, that we come here precipitously like the Prodigal Son, and that Mary fulfills in us — with what mercy, with what unforgettable sweetness — the command of love that she received from Jesus: ‘Woman, here is your son,’ ‘here are your children.’”

In 2020, the annual May 13 celebrations at the Fatima shrine took place for the first time without the physical presence of pilgrims.

ACI Digital, CNA’s Portuguese-language news partner, reported that this year’s international anniversary pilgrimage at Fatima began on Wednesday evening with the rosary and a candlelit procession at the statue of Our Lady of Fatima was carried from the Chapel of the Apparitions to the outdoor Prayer Area.

Mendonça, a poet and theologian who received the red hat in 2019, then presided over a Celebration of the Word in the presence of around 7,500 pilgrims.

On Thursday evening, the Shrine of Our Lady of Fatima will host the global prayer marathon for the end of the pandemic. The rosary, which will be offered for all prisoners, will be live streamed at 5 p.m. local time on the shrine’s website and the Vatican News YouTube channel.

Concluding his homily, Mendonça said: “We pilgrims always come to Fatima empty-handed. But from Fatima, we carry, awake within us, a dream. Fatima teaches us how to illuminate a world which is in darkness. Be it the small world of our heart, be it the heart of the vast world.”

“Thank you, My Lady, for making this place a lever of our humanity. A laboratory without doors or walls, always open to hope! In you, we praise the Lord who redeems us from every weakness.”

Children Claim Our Lady of Fatima...