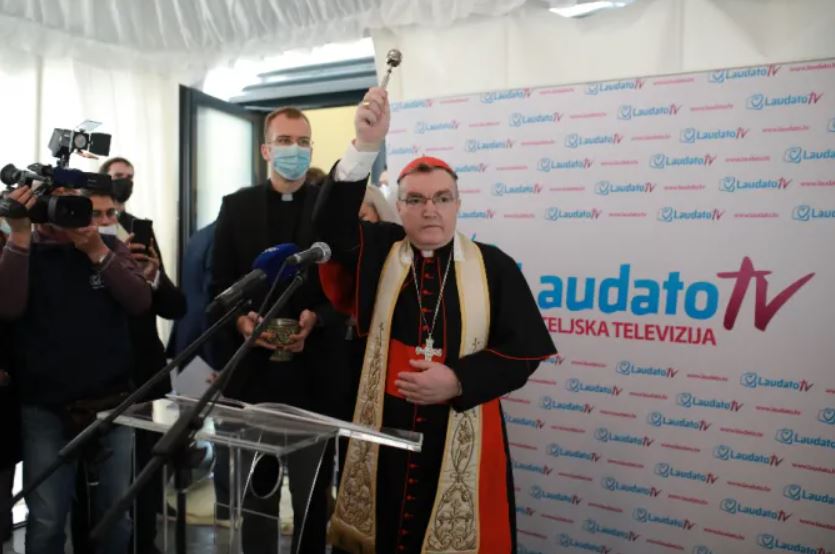 A cardinal on Wednesday blessed the new studio of an EWTN affiliate in Croatia.

The cardinal said that it was an important day not only for the affiliate, Laudato TV, but also for viewers in Croatia and around the world.

He said: “Today I can say that Laudato TV, along with the director Ksenija Abramović, realized its vision by persistently overcoming obstacles and challenges and realized this commendable work: television that is useful and needed by Croatian society, one that many recognized as an alternative to other media, and in whose content many families find comfort, strength, and encouragement.”

Croatia is a country of nearly four million people bordering Slovenia, Hungary, Serbia, Montenegro, and Bosnia and Herzegovina. More than 80% of the population are baptized Catholics.

Laudato TV began broadcasting at Christmas 2015. The opening of its new studio follows a difficult period for Croatia, which has suffered from the coronavirus pandemic as well as a devastating earthquake in December.

Ksenija Abramović, the station’s director, said: “This is a great grace and a gift from God, that six years after we started working, we can continue in a new work environment, in an office building that adequately meets production, technical, study requirements, and our professional needs, so that we can effectively continue to be the media service of evangelization.”

The opening comes as EWTN, the largest religious media network in the world, expands its presence in Europe. Last week, EWTN Poland opened its new office in Wrocław, Lower Silesia. Next week, EWTN Nordic will open a studio in the Swedish capital, Stockholm.

In case you missed it, here’s some big news from @EWTN! @EWTNPL opened its new office last week in Wrocław, Poland. Yesterday, in Zagreb, Croatia, EWTN affiliate @laudato_hr, blessed its new studios. Next week, @EwtnNordic will open a studio in Stockholm, Sweden. pic.twitter.com/tN9VnbGwyZ

As part of the blessing, Bozanić, the 72-year-old archbishop of Zagreb, toured Laudato TV’s new offices, which are almost 14,000 square feet and include a chapel.

The chapel contains the Stations of the Cross, stained-glass windows, a portrait of St. John Paul II, and a statue of Our Lady. Elements of the chapel are designed by contemporary Croatian sacred artists.

Archbishop Giorgio Lingua, the apostolic nuncio to Croatia, offered his encouragement to Laudato TV, placing it under the intercession of Blessed James Alberione.

The Italian blessed, who founded the Pauline Family, was from the same northern Italian diocese as the archbishop. Lingua donated a relic of the blessed to the new chapel.

He said: “Don’t let the mentality of this world overwhelm you: don’t try to please people, but God. Work diligently and improve more and more in your profession, but be calm: behind the scenes, you will have the best technician, the most capable director, the most talented presenter, and the most informative journalist.”

“Behind the scenes, in the sanctuary, the One who is the Truth, the Word, the Light of the World, will work with you and for you.”

At the beginning of May, Laudato TV started broadcasting a television signal from a new location at the foot of Medvednica, a mountain in central Croatia.

France Takes a Stand Against Gende...

Learn How Our Lady of Prompt Succo...