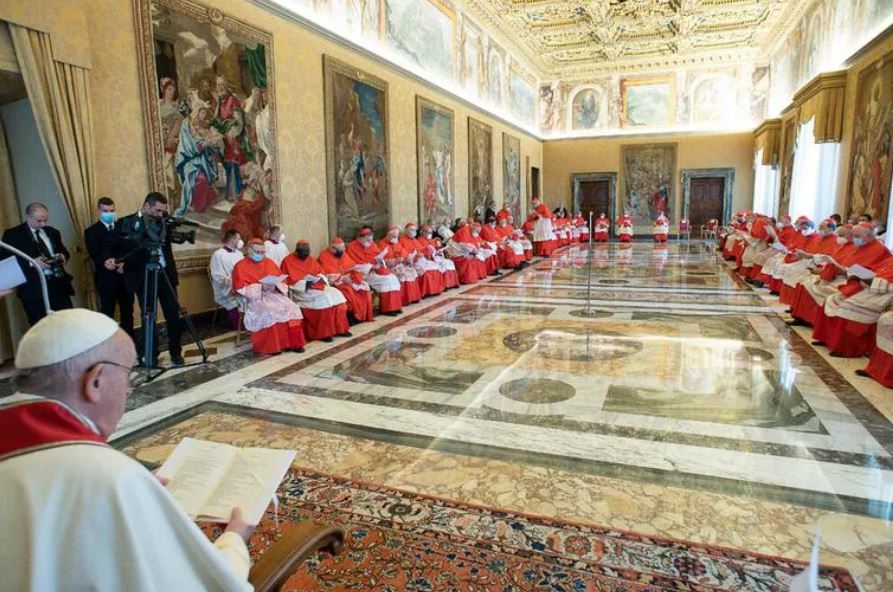 Making up the majority in the College of Cardinals, Pope Francis elevated the new cardinal priests during a consistory Monday.

The Holy Father approved the decision, made in accordance with canon law, during a consistory to confirm the canonizations of seven new saints on Monday.

As all eight cardinals were made cardinal deacons by Benedict XVI at a consistory in November 2010, they have each served as cardinal deacons for a decade and so their elevation to the rank of cardinal priests was expected.

The change has no effect on a future conclave except that Cardinal Sarah, 75, the prefect emeritus of the Congregation for Divine Worship, will no longer be “proto-deacon” — a title given to the most senior cardinal deacon under 80.

The proto-deacon traditionally announces “Habemus papam!” (“We have a pope!”) and the name of the new Roman Pontiff from the loggia of St. Peter’s basilica. That role will now fall to a new pro-deacon, Cardinal Giuseppe Bertello, president of Vatican City State, until he turns 80 in October 2022.

The Pope appoints cardinals, loosely described nowadays as the Pope’s advisors, or “cabinet,” who assist him in spiritual, pastoral, and administrative tasks, to one of three principal orders or ranks: the order of cardinal bishop, the order of cardinal priest and the order of cardinal deacon. The word cardinal comes from the Latin cardo which means “hinge,” a reference to the crucial role a cardinal has in aiding the Pope and his governance of the Church.

Their existence and hierarchy have a long and rich history based on the first apostles and apostolic tradition but with roots in ancient Jewish practice and a hierarchy that Moses, following the Lord’s commands, established among his collaborators. Today, however, while cardinals continue to be highly significant in the running of the Church, the orders of cardinal priests and cardinal deacons, and their levels of seniority within them, matter little beyond where they are seated at ceremonies.

Eastern patriarchs are also cardinal bishops and currently they number three. The dean of the College of Cardinals is also a cardinal bishop, and customarily given the Roman titular see of Ostia. Currently he is Cardinal Giovanni Battista Re who served as prefect of the Congregation for Bishops under Pope St. John Paul II and Benedict XVI.

Cardinal priests make up the majority in the College of Cardinals and generally are bishops of dioceses. For this reason, although Benedict XVI created 24 cardinals at his 2010 consistory, only 8 from that consistory were elevated to cardinal priest on Monday as many of the others were already cardinal priests on account of them being metropolitan or diocesan bishops. They included Cardinal Reinhard Marx of Munich, Cardinal Donald Wuerl, emeritus of Washington D.C., and Cardinal Malcolm Ranjith of Colombo. Eight others made cardinal at that consistory have since died. Within the order of cardinal priests, those ranked as the more senior members are those who have served as cardinal the longest rather than their time serving as cardinal priest.

Cardinal deacons, the lowest-ranking cardinals, are usually either officials of the Roman Curia, such as Cardinal Burke who was prefect of the Apostolic Signatura in 2010, or priests elevated to cardinal after their 80th birthday (Cardinal Brandmüller, president emeritus of the Pontifical Committee for Historical Sciences) and so unable to vote in a conclave. During the Middle Ages, cardinal deacons carried out administrative work in Rome and were responsible for charitable or pastoral works and distributing alms on behalf of the Holy Father. Nowadays, their tasks are broader, but each continues to be assigned a titular church in Rome.

The other cardinal deacons elevated to cardinal priest on Monday were Cardinal Angelo Amato, prefect emeritus of the Congregation for the Causes of Saints, Cardinal Francesco Monterisi, archpriest emeritus of the Basilica of St. Paul Outside the Walls, Cardinal Kurt Koch, president of the Pontifical Council for Promoting Christian Unity, Cardinal Mauro Piacenza, head of the Apostolic Penitentiary, and Cardinal Gianfranco Ravasi, president of the Pontifical Council for Culture.