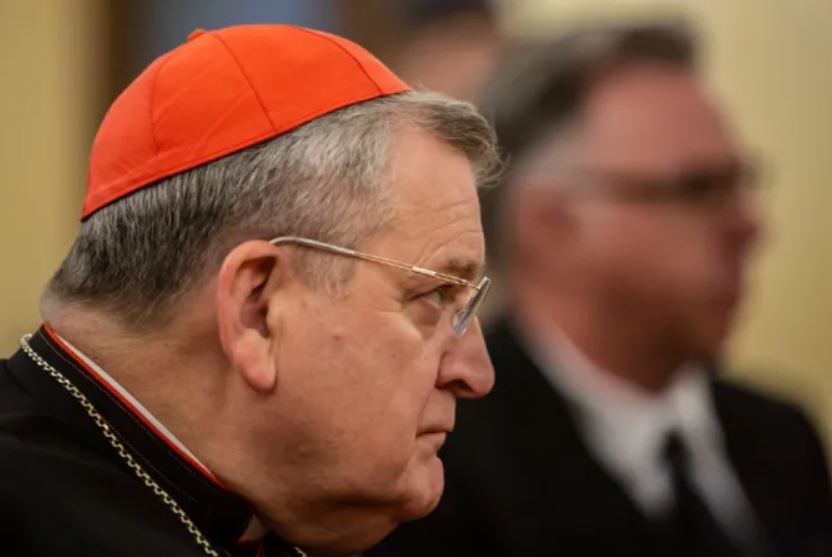 Cardinal Raymond Burke listens in the audience during the presentation of the new book Christvs Vincit by Bishop Athanasius Schneider, in Rome on Oct. 14, 2019. / Daniel Ibanez/CNA

Cardinal Raymond Leo Burke updated his followers on his recovery from COVID-19 and thanked them for their prayers in a letter published late Sunday evening, saying it will be “several more weeks” until he will be ready to return to his normal activities.

“Thanking you once again, with all my heart, for your faithful and generous prayers for the recovery of my health, I write to update you on the progress of my rehabilitation,” said Burke in the letter titled “Letter to Those Who are Praying for Me.”

“In thanking you, I thank, above all, Our Lord, who, in answer to your prayers, has preserved me in life. I thank, too, Our Lady of Guadalupe, and all the Saints through whose intercession you have offered and are offering prayers for me,” he said.

Burke announced that he had been discharged from the hospital on September 3, and is living in a house near his family members.

“The house is well adapted for the rehabilitation program which I am following. My priest secretary has now come from Rome to stay with me to assist me with my program of rehabilitation,” he said.

Burke’s representatives announced the 73-year-old cardinal had been admitted to the hospital and placed on a ventilator on August 14, four days after Burke said he had tested positive for the coronavirus. On August 21, he was taken off the ventilator and was discharged from the intensive care unit. Burke’s condition was described as “serious but stable” while he was in the ICU.

The cardinal described his recovery as “steady” but “slow,” and said that his doctors believe he is doing well.

“For my part, I am trying to grow in patience,” said Burke. “My principal challenges, at the present, are regaining certain fundamental physical skills needed for my daily living, and overcoming a general fatigue and difficulty in breathing, which are typical for those who have suffered the contagion of the Covid-19 virus.”

As part of his recovery process, Burke said that he would be unable to respond to messages individually and would be limiting the number of telephone calls and visitors.

Burke credited God for his survival, which, at times, seemed uncertain.

“Our Lord has preserved me in life for some work which He wishes me to carry out, with the help of His grace, for love of Him and of His Mystical Body, the Church,” he said.

“I am determined to use the present time of rehabilitation in the best manner possible, so that I will be prepared to carry out His work. Throughout the time in the hospital and now, I continue to place myself into the care of Our Blessed Mother, so that my heart, one with her Immaculate Heart, may rest always securely in Our Lord’s Most Sacred Heart,” said Burke.

The cardinal requested that people “continue to pray for my full recovery,” and added that “each day I offer my prayers and sufferings for your many intentions.”

“Let us all pray and offer sacrifices for the world and the Church, which are beset with so much confusion and error to the great and even mortal harm of many souls,” said Burke.

A leading prelate known for his outspoken defense of traditional Catholicism, Burke is prefect emeritus of the Apostolic Signatura and archbishop emeritus of the Archdiocese of St. Louis. He previously led the Diocese of La Crosse, his hometown diocese.

Burke reportedly fell ill while visiting Wisconsin. He is normally based in Rome.

Bringing Chivalry Back: How God Ca...