Cardinal: Eucharistic Congress in Budapest will be ‘a great sign of hope’ amid pandemic 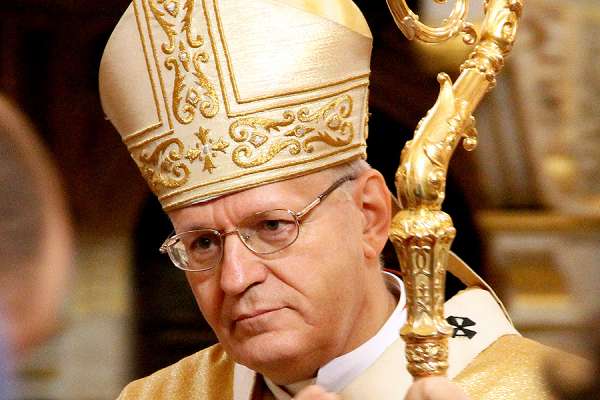 Cardinal: Eucharistic Congress in Budapest will be ‘a great sign of hope’ amid pandemic

CNA Staff, Feb 1, 2021 / 12:00 pm (CNA).- A Hungarian cardinal has said that this year’s International Eucharistic Congress in Budapest will be “a great sign of hope” amid the pandemic.

Cardinal Péter Erdő, the archbishop of Esztergom-Budapest, will host the 52nd International Eucharistic Congress in September after it was delayed for a year because of the coronavirus crisis.

“I am convinced that the International Eucharistic Congress, which was postponed by the decision of the Holy Father until Sept. 5-12, 2021, after the passing of the most difficult time of the COVID-19 pandemic will be a great sign of hope for the Catholics all around the world,” Erdő said in an interview with CNA.

The 68-year-old cardinal referred to a Vatican letter issued last summer urging Catholics to return to Mass following the suspension of public worship during nationwide lockdowns to prevent the spread of the virus.

He noted that the letter, written by Cardinal Robert Sarah, prefect of the Congregation for Divine Worship, underlined that the pandemic had shown Catholics that “the power source of the community life of the Church is the Eucharist.”

“Many parishes have learned how to broadcast liturgies online, but they also experienced that nothing can replace the personal presence,” Erdő said. “That is how the motto of the Congress becomes reality and gets a new meaning: ‘All my springs are in you’ (Psalm 87:7).”

The Vatican announced last April that the International Eucharistic Congress — one of the major events in the Catholic calendar — would be postponed from September 2020 to September 2021.

The decision to move the eight-day gathering was taken by Pope Francis, together with the Hungarian bishops and the Pontifical Committee for International Eucharistic Congresses.

The program of the event, originally scheduled for Sept. 13-20, 2020, includes Mass, prayer, catechesis, and talks, as well as cultural and spiritual events around the Hungarian capital.

Hungary has a population of 9.8 million, 62% of whom are Catholic. The country, which borders Austria, Serbia, Croatia, Slovenia, Romania, Ukraine, and Slovakia, last hosted the Eucharistic Congress in 1938.

Erdő, the Primate of Hungary, noted that around 60,000 people had signed up for the congress in Budapest before the pandemic swept the world.

“We are keeping in touch with them. For those who have asked, we transferred back the paid fees,” he said.

“For the new dates, we had to secure the locations again, which was mostly successful, but in the fall of 2021 a few events will be held in a different location, as they were planned for 2020.”

“The artistic preparations, Masses, musical pieces are done, but the rehearsals, with a great number of people, are yet to come.”

According the congress program, the opening Mass on Sept. 5 will include First Communions. The cardinal told CNA that children currently preparing for their First Communion would be offered different options.

Erdő said that the situation regarding hotel reservations would become clearer as the coronavirus crisis eases and hotels are allowed to operate again.

Hungary has recorded 368,710 COVID-19 cases and 12,578 deaths as of Feb. 1, according to the Johns Hopkins Coronavirus Resource Center. The Hungarian government has said that it will only begin relaxing restrictions when the number of current cases drops significantly.

Erdő said that those invited to speak at the congress sent a video message in the fall of 2020 which was viewed by many people on the official website and YouTube channel of the congress. Testimonies were also broadcast on Hungary’s public television channels.

“The preparation of the volunteers was also disrupted because of the pandemic, but we hope that soon we will be able to resume it. Anyway, we count on everyone who has applied so far,” he said.

“We also learned a lot from the experiences of the online events, so we are planning to make the congress online available to as many people as possible.”

The cardinal added that at a church in Budapest, the parish community prays every day at noon before the Eucharist for an end to the pandemic and relief for those suffering because of the virus.

The International Eucharistic Congress first took place in France in 1881. The event aims to offer a witness to the Real Presence of Jesus Christ in the Eucharist and promote a better understanding of the liturgy and the Eucharist in the life of the Church. The congress is usually held every four years.

The last International Eucharistic Congress took place in Cebu City, in the Philippines, in 2016. There were 12,000 participants, though millions took part in associated Masses.

Erdő said that the purpose of this year’s congress is summed up by the official prayer, which says that the event seeks to “serve the spiritual renewal of our community, cities, nation, Europe, and the world.”

“To be more precise, a lasting fruit of the congress in Cebu City was an orphanage, and we strive to establish a service network, which offers help and advice in a Catholic spirituality for the difficulties of the family life with the help of psychologists, teachers, doctors, etc,” he said.

“That would be our contribution to the lasting of the marriages, as Pope Francis also mentioned in his apostolic exhortation ‘Amoris laetitia.’”