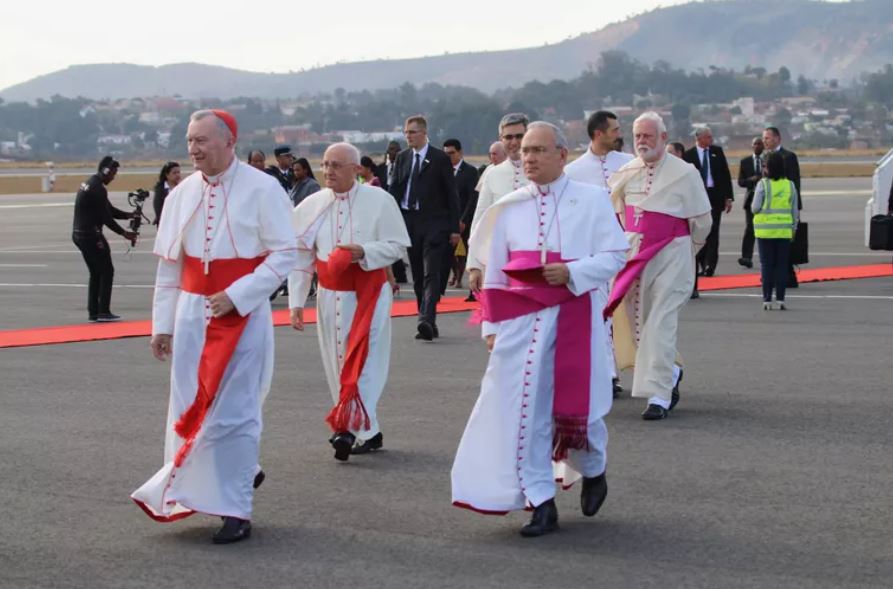 After enforcing strict vaccine mandates, the Vatican Secretary of State and ‘sostituto’ Archbishop Edgar Peña Parra test positive for the disease, though symptoms are reportedly mild.

VATICAN CITY — The most important official of the Roman Curia after Pope Francis, Vatican Secretary of State Cardinal Pietro Parolin, and his deputy, sostituto Archbishop Edgar Peña Parra, have both tested positive for COVID-19, Vatican sources confirmed to the Register last night.

The officials caught the virus after having two doses of the COVID-19 vaccine and the booster shot, with only Cardinal Parolin, 67, showing symptoms of the disease, the sources said. Between them, both Cardinal Parolin and Venezuelan Archbishop Peña Parra, 61, are responsible for the overall running of the Roman Curia and Holy See, including its diplomatic service.

The Holy See Press Office confirmed to the Register Jan. 18 that both officials are positive, “His Eminence with light symptoms and His Excellency none, and they’re both in isolation in their respective apartments.”

The Italian daily Domani reported Jan. 18 that Cardinal Parolin underwent a test between Sunday and Monday after showing mild symptoms. It added that other members of the Curia close to the cardinal are being tested.

On Monday, it was announced that the cardinal would not visit Erba on Feb. 6 to celebrate the 25th anniversary of the death of Italian bishop and missionary, Aristide Pirovano, due to the spread of the infections.

The news of Cardinal Parolin testing positive for COVID comes almost a month after he signed into force one of the world’s most restrictive vaccine mandates, obligating staff both in the Roman Curia and in institutions linked to the Holy See to show a “super green pass” — proof of either vaccination or to have recently recovered from the virus.

The mandate also applies to all external contractors, the personnel of external companies, and to almost all visitors. Beginning Jan. 31, all staff and visitors to Vatican City State will also be required to show proof of having received the booster shot. None of the restrictions apply to those attending liturgies or the Pope’s general audience.

Since the COVID-19 emergency began at the Vatican in March 2020, the Vatican has reported zero deaths on its territory as a result of the virus.

In December 2020, the Vatican signed a contract with Pfizer to exclusively distribute its vaccine partly on the basis that the company had said that in clinical trials their drug had “been shown to be 95% effective,” meaning that vaccinated people had a 95% lower risk of getting COVID-19 compared with the control group participants in trials.

But vaccinated staff have continued to contract the disease even before the highly contagious Omicron variant emerged late last year. In late summer and the beginning of autumn, 14 Swiss Guards caught COVID-19 despite having been forced to be double vaccinated or face dismissal and reportedly only had mild symptoms.

Last week, the Register revealed that Bishop Brian Farrell, secretary of the Pontifical Council for Promoting Christian Unity, was recovering at home after testing positive with COVID-19 despite having been double vaccinated and receiving the booster shot.

Since October, the Vatican has been offering the booster shot to all its staff, and both Pope Francis and Benedict XVI are reported to have received it.

But despite other infections also occurring, the Vatican is not voluntarily disclosing them, having halted the announcement of positive cases since the beginning of 2021 when the Vatican’s vaccine rollout began.

Pfizer’s CEO, Albert Bourla, who the Register reported last week made two undisclosed private visits to Pope Francis last year, acknowledged in an interview on Jan. 10 that two doses of the Pfizer vaccine “have very limited protection, if any” against the spread of the highly contagious Omicron variant. But he added that “the three doses, with the booster, offer reasonable protection against hospitalization and death.”

Although the Pfizer vaccine plus its booster is reportedly effective in protecting people from developing severe cases of COVID-19, the Vatican’s strict vaccine mandates have been enforced in the face of concerns about the Pfizer vaccine being tainted by abortion, as well as other concerns over its safety.

Thousands of suspected yet relatively rare adverse side effects have been reported, not a few of which have reportedly resulted in death largely caused by heart problems or blood clotting.

Ahead of trial, Finnish MP facing...