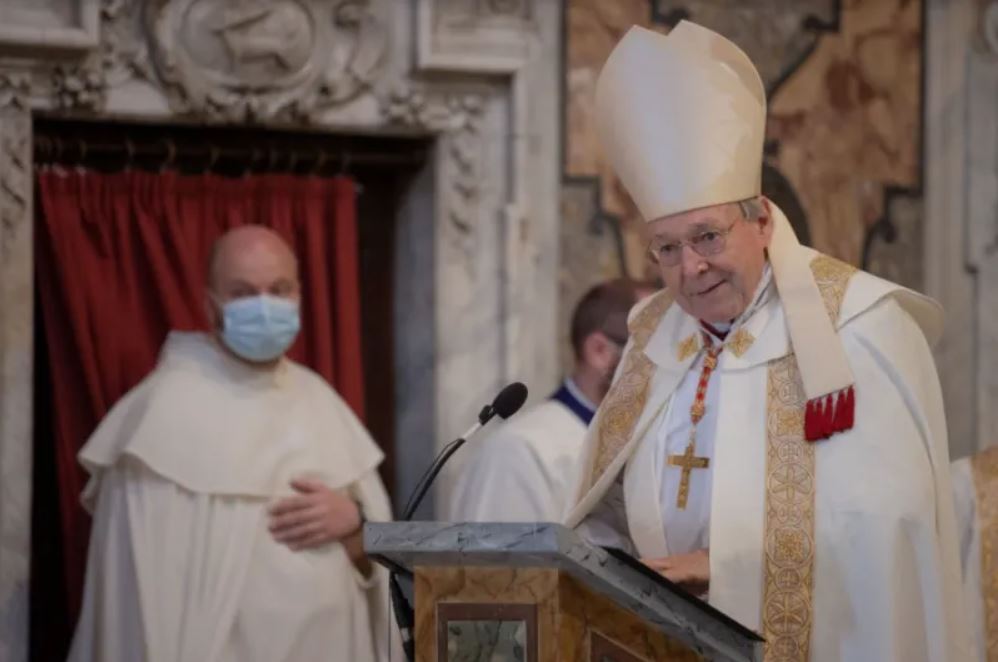 Cardinal George Pell at the annual Eucharistic procession at the Angelicum in Rome, May 13, 2021. / Daniel Ibáñez/CNA.

Cardinal George Pell led a Eucharistic procession Thursday at the Angelicum in Rome.

The former Vatican finance czar led the annual procession on May 13, the feast of Our Lady of Fatima, at the institution formally known as the Pontifical University of St. Thomas Aquinas, located on Rome’s Quirinal Hill.

This was the first time that the cardinal had led the procession, which was canceled last year due to the coronavirus pandemic.

Speaking to EWTN News, Pell said: “I’m very pleased to be here. I gather it’s a student initiative, led by students, a wonderful example of faith in practice.”

He continued: “I think it’s important after COVID to get back to a regular church routine of prayer and worship. I’m not sure in the long run that COVID will change too much, but it might have given another excuse for us to get a little bit slack, a little bit relaxed, in our approach to our prayer and worship, and we’ve got to battle against that.”

The event began with a reflection by the 79-year-old Australian cardinal at the Angelicum’s Church of Sts. Dominic and Sixtus, one of Rome’s titular churches assigned to cardinals.

The university church is the titular church of Portuguese Cardinal José Tolentino de Mendonça, archivist and librarian of the Holy Roman Church.

The Angelicum is a Dominican institution that traces its history back to 1222, shortly after Pope Honorius III officially approved the Order of Preachers, founded by the Spanish priest Dominic de Guzmán.

The cardinal’s address was followed by exposition of the Blessed Sacrament. The monstrance was then carried beneath a golden processional canopy through the university grounds, followed by hundreds of people.

Cardinal Pell, the former prefect of the Vatican Secretariat for the Economy, arrived in Rome on Sept. 30, 2020, on his first visit to the city since he left in 2017 for Australia to prove his innocence of abuse charges.

The cardinal was imprisoned in 2019 but ultimately acquitted in April 2020 after 404 days in prison.

He was unable to celebrate Mass in jail because he wasn’t allowed access to wine. He said that this deprivation heightened his appreciation for the Eucharist.

He said: “I had 13 months in jail. I was unable to celebrate Mass and attend Mass. I listened to many Protestant preachers, and I became even more aware of the centrality of the liturgical celebration. It’s a making present of Christ’s sacrifice. It’s an explicit act of adoration. It involves the whole of our persons. It needs faith to be practiced.”

“It’s the high point of Catholic life, and we have to learn that, get into it. Most of us do that as we grow up. It’s beautiful and enriching and absolutely central.”

The cardinal will turn 80 on June 8, losing his right to vote in a future conclave.

Ignatius Press released the second book in his three-volume prison journal on May 3. The book covers the rejection of his first appeal and his efforts to bring his case before the High Court of Australia, the country’s top court.

The cardinal told EWTN News: “What is interesting for a person of my age is to see the enthusiasm for silent prayer and adoration among so many young people, young adults, and I think it’s, one, a thirst for transcendence, but also a search for a little bit of quiet and peace because their lives are very, very distracted, very noisy.”