Cardinal Pell Represents the Life of the Church in Our Age 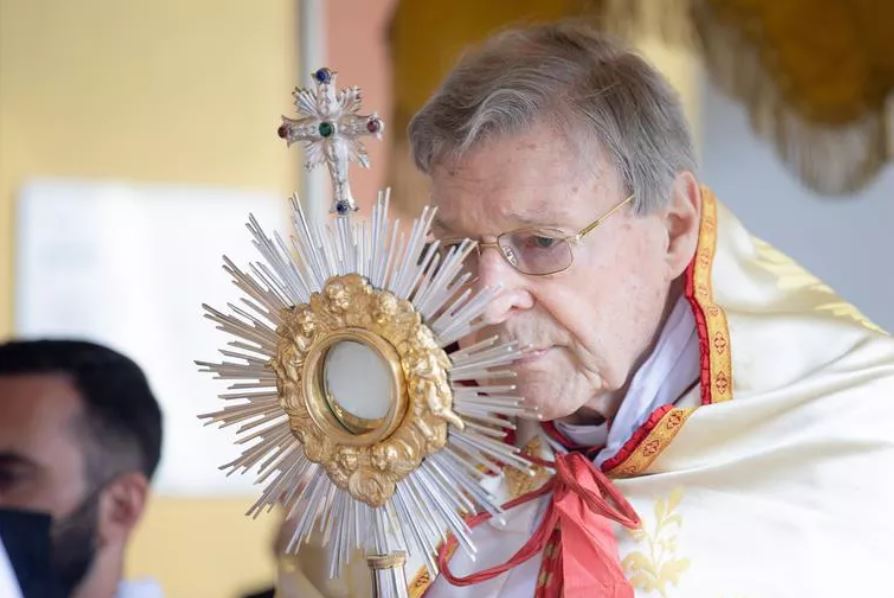 Cardinal Pell Represents the Life of the Church in Our Age

Cardinal George Pell holds the monstrance with the Blessed Sacrament during the annual Eucharistic procession at the Angelicum in Rome on May 13. (photo: Daniel Ibanez/CNA)

COMMENTARY: The cardinal, who turns 80 June 8, is a welcome presence in Rome these days.

Cardinal George Pell turns 80 on June 8. He has, to an extraordinary degree, represented in his person the life of the Church in our age.

Ordained a priest in 1966, he would live the first 20 years of his priesthood in the post-Vatican II turmoil that afflicted the Church in Australia. A priest in Ballarat, he served in the 1970s under Bishop Ronald Mulkearns, later discovered to be greatly negligent in one of Australia’s most notorious cases of clerical sexual abuse.

Pell’s brilliance was evident in those early years. After his ecclesiastical degrees in Rome, he got a doctorate in Church history from Oxford. He returned to his native Ballarat, clearly one of the more capable leaders. The question was whether the increasingly unmoored Church in Australia was looking for his kind of leadership.

Father Pell was appointed in 1987 as the auxiliary bishop of Melbourne. At the relatively young age of 45, he was an example of the Pope John Paul II turn in episcopal appointments. Melbourne was led by Archbishop Frank Little, a man not particularly suited to turning Australia’s largest diocese in a more affirmatively orthodox direction. Archbishop Little was not altogether different from the other Australian bishops at the time; the appointment of the young Bishop Pell was an attempt to change that.

A sign that Bishop Pell was not just another auxiliary bishop was his appointment as one of the bishop members of the Congregation for the Doctrine of the Faith (CDF). He served from 1990 to 2000 in that role, customarily reserved for much more senior bishops and cardinals.

Given the evident esteem in Rome from St. John Paul II and Cardinal Joseph Ratzinger, it followed that Bishop Pell was named archbishop of Melbourne, succeeding Archbishop Little in 1996.

Archbishop Pell was engaged in the CDF during one of the most consequential teaching decades in the entire papal magisterium, when the John Paul II/Ratzinger partnership reached the apex of productivity and fruitfulness. The 1990s saw the publication of the Catechism of the Catholic Church (1992) and major encyclicals on social doctrine (Centesimus Annus, 1991), the missionary nature of the Church (Redemptoris Missio, 1990) and the dignity of life (Evangelium Vitae, 1995). The compatibility of faith and reason was affirmed (Fides et Ratio, 1998), and the rejection of relativism in the moral life (Veritatis Splendor, 1993) was declared.

As a bishop member of the CDF, Archbishop Pell would not have been involved in the details of such documents, but he was at the center of teaching activity in a most consequential decade.

In 2001, Archbishop Pell was transferred from Melbourne to Sydney, the first man to be head of both archdioceses. The transfer was to facilitate his creation as a cardinal, which took place in 2003.

Cardinal Pell would emerge as a prominent voice throughout the decade, including as host of the 2008 World Youth Day in Sydney. He was reported to have played a key role in the 2005 conclave that elected Benedict XVI.

Yet it was his 2002 appointment as head of the Vox Clara commission that was his most influential post for the universal Church. In 2001, the Vatican adopted new rules for more faithful liturgical translations and decided that there would be one English translation for the entire world. Given the decades-long liturgical translation battles, whether it would be possible to achieve that was very much in doubt.

The Vox Clara commission was an advisory body within the Congregation for Divine Worship, but it took the leading role in coordinating the mammoth project, involving hundreds of bishops in countries as different as India and Ireland, the Philippines and the Bahamas, to say nothing of the United Kingdom and the United States.

Cardinal Pell steered the project through, resulting in the adoption of the new English translation in Advent 2011, reshaping how every single Holy Mass offered in English is said.

It was the most significant step in improving the quality of the liturgy in English since the early post-conciliar reforms.

In 2010, after nearly 10 years in Sydney and a frequent presence in Rome due to Vox Clara’s work, Cardinal Pell was rumored to be in line to take over the Congregation for Bishops. Cardinal Pell, by then well established as a formidable force not shy about speaking his mind, was thought to be a welcome presence in Rome by some — and opposed by others. In the end, the cardinal remained in Sydney.

For a time. After the election of Pope Francis in 2013, Cardinal Pell was named to the inner circle of advisers, the “council of cardinals” known as the C-8. Then, in the first major reforms of the Francis pontificate, Cardinal Pell was named prefect of the new Secretariat for the Economy. The new dicastery was to bring accountability, transparency, honesty and professionalism to troubled Vatican finances.

Cardinal Pell made some early advances, including important structural reforms in budgeting, auditing and authority. His fierce opponents in the Curia, led by then-Archbishop Angelo Becciu, managed to roll those reforms back.

By the summer of 2017, when Cardinal Pell returned to Australia to face the false accusations of sexual abuse made against him, the economic reforms were on the back foot. During his time in Australia, his term as prefect lapsed, and he was not reappointed.

In 2020 and 2021, Cardinal Pell’s reforms have been vindicated, the now-Cardinal Becciu was sacked, and the structural reforms put in place originally under Cardinal Pell have been reinstated. At age 80, he is now a welcome and celebrated presence in Rome — his character, his vision and his legacy all secure.

The 2020s will be spent in retirement for Cardinal Pell — but not without influence, as his health appears good and his voice is strong. The new decade was marked by the publication of two volumes of his prison journal, a new contribution from Cardinal Pell touching on spirituality, a subject on which he had not published before.

The third volume is still forthcoming — and one expects much more from Cardinal Pell besides.
Share With:
Previous Article

The Miracle of Vistula, and Boris...

Love Them Both: Offering Healing t...