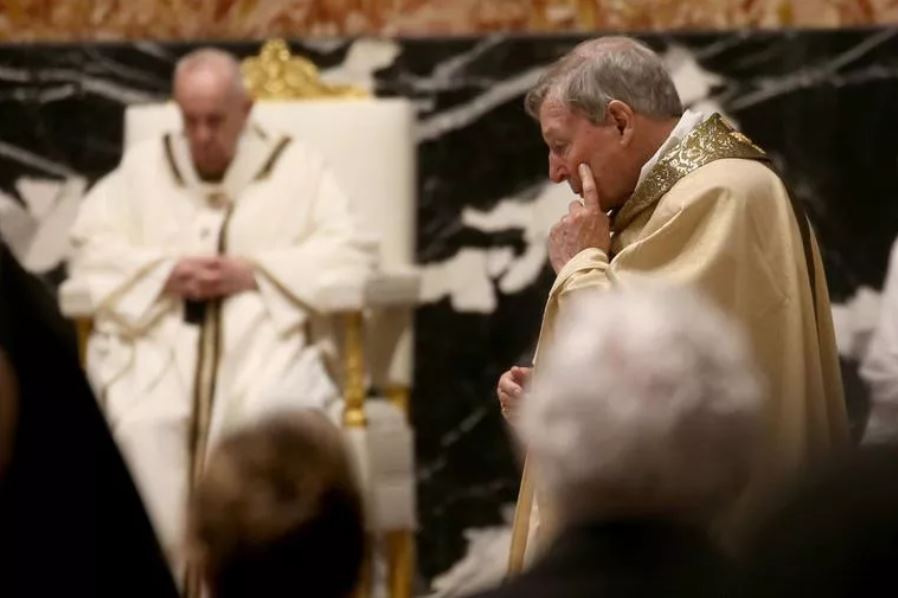 One of the striking sights of Holy Week 2021 was Cardinal George Pell, a head taller than most of his fellow prelates, clearly visible at the papal liturgies.

It was during Holy Week 2020 that his long criminal ordeal came to an end, freed from more than 400 days in solitary confinement, exonerated of sexual abuse by a unanimous judgment of Australia’s High Court.

In the intervening year, there have been four major developments in Cardinal Pell’s story.

The most significant is the publication of the first volume of Prison Journal, the daily diary that Cardinal Pell wrote while incarcerated. With a spirit remarkably free of bitterness or self-pity, the cardinal recalls how his world shrank to his cell, “seven to eight metres long, more than two meters wide on the side of the opaque window.”

Confined day and night, save for a short period of daily exercise, Cardinal Pell’s diary frequently records literally the most mundane of topics — the weather. Yet, how important that became in his severely diminished prison life; inclement weather might make it impossible for him to leave his cell at all.

Solitary confinement was required, in the judgment of the prison authorities, to protect Cardinal Pell from assault by the other prisoners. The cardinal is generous in his assessment of his guards, but it remains a terribly harsh punishment for a man no one considered a threat to others or to good order.

Cardinal Pell’s journal illustrates that a soul open to God cannot be entirely caged. His fidelity to prayer — principally the breviary, given that he was denied the opportunity to offer the Holy Mass — and communion with a vast array of correspondents meant that while in solitary confinement, he was not alone. The forthcoming volumes of the journal will no doubt establish it as profound spiritual reading for all those afflicted unjustly.

The first volume, which concludes before the Court of Appeal judgment, is brimming with confidence that Cardinal Pell will prevail on appeal. He even discusses with his lawyers the arrangements for issuing a statement upon his vindication. The appeal went against him, meaning seven more months in prison.

One of the great peculiarities of Cardinal Pell’s prosecution was a total publication ban, which covered anything about the case whatsoever. Since the cardinal’s release, the Australian prosecutors have settled with media companies that were charged with unlawful reporting on the trial.

Cardinal Pell’s secret trial was supposed to be to his benefit. With two trials on two sets of accusations — one set in the Melbourne Cathedral in 1996, and the other regarding his home Diocese of Ballarat in the 1970s — it was thought that publicity from the first trial would make it impossible to empanel an impartial jury for the second. It was not an unreasonable supposition, but it worked to Cardinal Pell’s disadvantage.

Prison Journal reveals that Cardinal Pell maintained his confidence in Australian justice even after his conviction and imprisonment, despite considerable evidence that the Victoria state police, which prosecuted him, was deeply corrupt. The entire affair raises troubling questions about what ought to be done in cases when civil authorities render wrongful convictions. It is not a rare circumstance, yet many canonical protocols for abuse allegations assume the integrity of civil authorities.

When Cardinal Pell’s conviction was publicly announced in early February 2019, the Congregation for the Doctrine of the Faith announced that it would open its own investigation. Abuse protocols require that when any cleric has a sexual abuse accusation made, the CDF is to be notified if the accusation has the “semblance of truth.” A criminal conviction would certainly meet that standard. A canonical process of investigation follows, though often it does not proceed until criminal proceedings are complete.

In the meantime, the accused is deprived of public ministry, as was Cardinal Pell. Given that the cardinal, who will turn 80 June 8, has clearly returned to public ministry, it would appear that the CDF’s canonical investigation has been resolved in his favor. Yet that has not been announced.

In the year since Cardinal Pell’s release, the Vatican has not publicly commented on the status of the investigation. Even his critics in the Vatican believed the charges to be complete fabrications. It is thus assumed that the High Court’s emphatic acquittal was accepted as an adequately thorough investigation of the matter, and it has been quietly closed.

But why quietly? Why not a public announcement? Likely because the Cardinal Pell case highlights the awkward situation that would prevail if a canonical process came to a different conclusion that a criminal or civil process. Imagine a priest convicted of equally impossible charges, but without the resources to appeal the case to the High Court. If a canonical investigation concluded that the wrongfully convicted priest was innocent, would the Church have the courage to make that finding, with its attendant consequences?

The Vatican avoided the nightmare scenario, which would have come to pass had the High Court refused to take Cardinal Pell’s appeal, or ruled against him. A canonical investigation would have certainly found him innocent, uncorrupted as it would have been by fevered anti-clericalism. Would the Vatican have had the courage to defy the judgment of the Australian criminal justice system?

During the whole matter, almost all Vatican press statements expressed their “respect” for Australian criminal justice. Why? It manifestly failed in Cardinal Pell’s case at least, as it ought not require a High Court appeal to free an innocent man from 400 days of incarceration in solitary confinement.

It should also be remembered that the standard for “conviction” in a canonical court is not the “beyond a reasonable doubt” standard of criminal courts. It is something similar — “moral certainty.” In theory and in practice, acquittal in the criminal courts does not mean vindication in the canonical process. A criminal acquittal does not render the canonical process moot. That is another reason why there should be clarity on the status of the Cardinal Pell investigation.

Financial Reform in the Vatican

In December 2019, even while Cardinal Pell was in prison, and two years removed from office in Rome, stories were published in the British financial press about dodgy Vatican real estate investments in London. The widening financial scandal, which caused Pope Francis to sack Cardinal Angelo Becciu, has not yet come to a conclusion. But it is now clear that Cardinal Pell’s financial reforms — first endorsed, then later reversed, by Cardinal Becciu and Pope Francis — were on the mark from the beginning.

In 2020, Pope Francis reversed himself again, going back to Cardinal Pell’s original program. While Cardinal Pell is no longer in office, his retirement in Rome has no doubt been made more pleasant by witnessing his program of reform advance. The revelations since his release a year ago, punctuated this past month by rulings from British and Italian courts, vindicates that Cardinal Pell was correct in vigorously pursuing what he would later call “Technicolor criminality.”