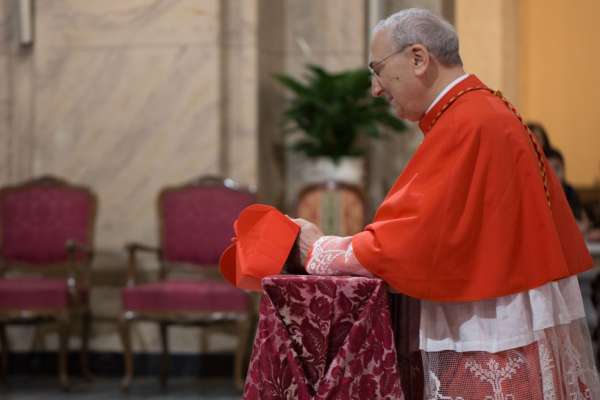 Rome Newsroom, Mar 25, 2021 / 05:20 am (CNA).- An Italian cardinal who remained in Syria for the entire duration of the 10-year civil war has said that he fears “time is running out” to rebuild the country as it descends into deeper poverty.

Cardinal Mario Zenari was stationed in Damascus as the papal envoy when pro-democracy protests first broke out in its streets in March 2011. He was inside the Vatican embassy in Syria’s capital as it was hit by rebel mortar shelling that threatened his life in 2013. And in the past year, he has continuously advocated for the humanitarian needs of 11 million Syrians, who he says have been hit by a “poverty bomb” amid the global economic repercussions of coronavirus measures.

“Peace, I repeat, will not come to Syria without reconstruction and without economic recovery,” Zenari said March 23.

“But how long will Syrians have to wait? Time is running out. Many of the people have lost hope. Urgent and radical solutions are needed.”

The cardinal spoke via Zoom from Damascus at a virtual event organized by the Catholic charity Caritas Internationalis.

Zenari said that the “present political deadlock” between the parties in the Syrian conflict must be overcome through “mutual and reciprocal [steps], step by step from the Syrian government and the opposition and key international players.”

“While the peace process is in this moment in a complete deadlock, the poverty, on the contrary, is moving forward fast,” he said.

About 90% of the population of Syria is living below the poverty line, Zenari said, quoting the latest figures from the United Nations and noting that it is “the highest percentage in the world.”

The apostolic nuncio explained that the Lebanese financial crisis, the effects of the COVID-19 pandemic, internal corruption, and foreign sanctions have all contributed to the deepening poverty in Syria caused by ten years of war.

“The Syrian pound has lost much of its value against the U.S. dollar. The price of food has significantly increased. At the bakeries, people queue to try to get limited subsidized bread that is available. The same scene for petrol all around the country. … The people call this difficult time as ‘economic war’, worse than that of previous years,” he said.

The cardinal expressed gratitude to all the humanitarian organizations and countries that have provided support and aid during the conflict, particularly Caritas Syria, which has been working to provide food, clean drinking water, medical services, education, psychological support for children, and renovations of schools and houses among other services to the Syrian people.

The World Bank estimates that the country has suffered at least $197 billion worth of infrastructure damage during the conflict.

When Zenari first arrived in Syria as apostolic nuncio in 2008, the country’s economy was growing at a rate of about 4% per year.

“After 10 years of a bloody conflict, the peace process, unfortunately, is in a deadlock, the reconstruction, and the economy recovery haven’t yet started, and many people are losing hope in the future of their country,” Zenari said.

Pope Francis made Zenari a cardinal in 2016 as a sign of the pope’s closeness to Syria, Cardinal Pietro Parolin told CNA at the time.

The pope marked the 10th anniversary of the start of the Syrian war by praying for an end to the conflict and a renewed commitment from the international community for rebuilding efforts at the end of his Angelus address on March 14.

Pope Francis said: “Ten years ago, the bloody conflict in Syria began, leading to one of the most serious humanitarian catastrophes of our time: an untold number of dead and wounded, millions of refugees, thousands missing, destruction, violence of all kinds and immense suffering for the entire population, especially the most vulnerable, such as children, women and the elderly.”

“I renew my heartfelt appeal to the parties to the conflict to show signs of goodwill, so that a glimmer of hope may open up for the exhausted population.”

He continued: “I also hope for a decisive and renewed commitment, constructive and in solidarity, on the part of the international community, so that, once the weapons have been laid down, the social fabric can be mended and reconstruction and economic recovery can begin.”

”Let us all pray to the Lord that the great suffering in our beloved and tormented Syria may not be forgotten, and that our solidarity might revive hope.”

Catholic Church in Sweden: Between...

Palm Sunday and Looking to the Pas...