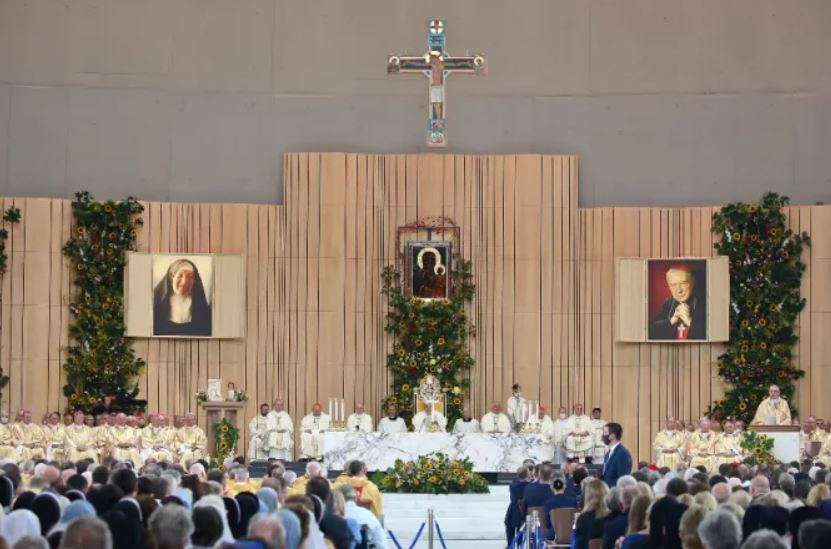 Cardinal Marcello Semeraro, prefect of the Congregation for the Causes of Saints, declared Cardinal Stefan Wyszyński and Mother Elżbieta Róża Czacka blessed at a Mass at the Temple of Divine Providence in Poland’s capital, Warsaw.

He praised Wyszyński, the Primate of Poland who led the Church’s resistance to communism, and Czacka, a blind nun who revolutionized care for the visually impaired, for offering a “model of service.”

“Today’s new blesseds have received from this nation the inestimable good of faith and the vitality of the centuries-old tradition of love for God,” he said at the Mass on Sept. 12, the feast of the Most Holy Name of the Blessed Virgin Mary.

“What did they offer the people in return? They offered a life-long conviction of God’s primacy (‘Soli Deo’ — ‘To God Alone’ — was Cardinal Wyszyński’s episcopal motto), which is capable of restoring man to his dignity.”

“They gave testimony of a life faithful to the Gospel, at all costs. They have left a model of service to a specific person in need, even when no one cares for him, and indifference seems to prevail.”

Attendance at the live-streamed ceremony was limited due to the coronavirus pandemic. Poland’s bishops encouraged Catholics to attend local celebrations and follow the beatification on television and online.

The ceremony took place at the same time as the closing Mass of the International Eucharistic Congress in Budapest, Hungary, celebrated by Pope Francis.

In his Angelus address after the Mass, the pope said: “Today in Warsaw, not far from here, two individuals who bore witness to the Gospel are being beatified: Cardinal Stefan Wyszyński and Elżbieta Czacka, foundress of the Franciscan Sisters Servants of the Cross.”

“Both were familiar with the Cross firsthand. Cardinal Wyszyński, the Primate of Poland, who was arrested and imprisoned, was always a courageous pastor according to the heart of Christ and a herald of freedom and human dignity.”

“Sr. Elżbieta, who as a young girl lost her sight, devoted her whole life to assisting the blind. May the example of these new blesseds encourage us to transform darkness into light with the power of love.”

The recipients of the miracles that paved the way for the beatifications took part in the ceremony.

Karolina Gawrych, 18, carried the relics of Czacka, who she credits with her recovery from a devastating accident.

Wyszyński’s relics were taken up to the altar by Sr. Nulla, who recovered from a two-inch tumor in her throat after members of her religious community sought the cardinal’s intercession.

At the ceremony, it was announced that Czacka’s memorial would be observed annually on May 19 and Wyszyński’s on May 28.

A congregation of around 7,000 people attended the beatification, with half inside the church and half seated outside beneath an overcast sky.

The blesseds first met in 1926 in Laski, a village about 10 miles west of Warsaw, where the religious sister had co-founded a center supporting the blind.

During the Warsaw Uprising in 1944, Czacka and Wyszyński helped to organize a field hospital for the wounded in Laski.

Semeraro began his homily in Italian, before handing over to Warsaw auxiliary Bishop Piotr Jarecki, who continued reading the cardinal’s text in Polish.

Semeraro said that during the revolt against the Nazi German occupiers, Wyszyński found a piece of burning paper that had been blown from the charred ruins of the capital.

“On it, he read these words: ‘You will love,’” the Italian cardinal said. “Wyszyński, deeply moved by them, took the piece of paper to the chapel, showed it to the sisters, and said: ‘This is the holiest appeal of fighting Warsaw to us and the entire world. An appeal and a testament: You will love.’”

“He lived his ministry as pastor and bishop in response to this appeal and testament.”

After the war, Wyszyński was named archbishop of Gniezno and Warsaw, becoming the Primate of Poland. In 1953, he was placed under house arrest after he refused to subordinate the Church to the communist authorities.

“During this politically and socially complicated period, he bravely, diligently, and with determination steered the boat of the Church in Poland, defying the ideology that was dehumanizing and leading people away from the fullness of life, the truth contained in Christ’s Gospel faithfully lived and accomplished,” Semeraro said.

“In the fight to defend the freedom of Polish women and men, he often repeated: ‘Whoever hates, has already lost.’ He did not spare himself in anything; he bore all the humiliation and suffering that culminated in three years of imprisonment, from 1953 to 1956.”

Wyszyński is known as the “Primate of the Millennium” because he oversaw a nine-year program of preparation culminating in a nationwide celebration of the millennium of Poland’s baptism in 1966.

He also helped to secure the approval of Karol Wojtyła as archbishop of Kraków in 1964, which ultimately led to Wojtyła’s election as Pope John Paul II in 1978.

In a letter to Poles after his election, Semeraro noted, John Paul II paid tribute to Wyszyński, writing: “This Polish pope, who today, full of fear of God, but also of trust, is beginning a new pontificate, would not be on Peter’s chair were it not for your faith which did not retreat before prison and suffering. Were it not for your heroic hope, your unlimited trust in the Mother of the Church!”

Semeraro then turned to Czacka, who was born into an aristocratic family in present-day Ukraine and lost her sight at the age of 22. After her family’s desperate efforts to restore her vision failed, a doctor advised her to dedicate her life to serving blind people in Poland.

She founded the Society for the Care of the Blind, as well as the Congregation of the Franciscan Sisters Servants of the Cross, and adapted the Braille alphabet to the Polish language.

“Through her extraordinary diligence and commitment, Blessed Elżbieta Róża shows us that there are no obstacles for those who want to love God and love as He does,” Semeraro observed.

Recalling the close bond between the two blesseds, the cardinal said that from their first meeting onwards, they were united in “a communion of faith, love for God and the needy and defenseless human beings.”

“They both knew how to fill each other with strength, endurance, and courage. He was personally involved in helping all those who experienced abuse and limitations in practicing their freedom and professing their faith; she, blind among the physically and spiritually blind, helped all those who were abandoned and left at the margins of society,” he said.

He noted that when Wyszyński presided at Czacka’s funeral in 1961, the Polish cardinal described her as “a person who constantly stood before the face of her Good Lord.”

“That is why she was able to share and nourish so many people around her with love,” Wyszyński said.

Ahead of the beatification, a letter from Poland’s bishops was read out in churches.

The bishops said: “God united these two people, so different after all, and through them He did great things. The words of the Primate — Soli Deo (To God Alone) — and those of Mother Elżbieta — Through the Cross to Heaven — which they left us, are still very relevant today. They showed us the way. There is no other way to look for.”

“Before his departure for Rome for the sessions of the [Second Vatican] Council, before the difficult talks with the communist authorities of those days, he would come to Laski without giving notice or announcing himself, to pray there for at least a while,” the bishops wrote.

“Every year, with the exception of the period of his imprisonment or illness, after the Holy Thursday Mandatum in the Archcathedral, he would go to Laski for adoration with the blind, the sisters, and the lay employees of the center, and to be filled with the power that flows from the light of the Paschal Cross and the victory of Christ’s love, so that he could then have it for everyone.”

The Polish parliament declared 2021 the Year of Cardinal Stefan Wyszyński in honor of the churchman.

The countdown to the beatification saw the launch of new websites dedicated to the Polish Primate, including a web portal created by Polskie Radio, the national public service radio broadcaster.

There was even a new strategy game, created by Weronika and Kamil Kreczko, called Non Possumus.

The game’s name refers to Wyszyński’s 1953 letter to Poland’s communist leader Bolesław Bierut, in which he refused to allow the communist authorities to play a role in Church appointments, declaring “Non possumus!” (We cannot).

A pilgrim copy of the revered icon of Our Lady of Częstochowa was displayed above the sanctuary at the beatification ceremony. The copy was created in 1957 at Wyszyński’s request and toured Poland despite attempts by the communist regime to disrupt veneration of the replica icon.

The image was brought to Wyszyński as he lay on his deathbed in May 1981. According to witnesses, he said: “Thank you, Mother, for once again coming to me. You have always been to me the greatest Grace, Light, Hope, and program of my life.”

In their letter, Poland’s bishops noted that both Czacka and Wyszyński were deeply devoted to the Virgin Mary.

They wrote: “Each of them entrusted their way to holiness to the Blessed Mother and wanted to serve God and man as Mary did. Mother Elżbieta made her act of consecration to the Mother of God on Dec. 8, 1921, saying: ‘I choose you today as my Mother, Protector…’ And the Primate, imprisoned in Stoczek Warmiński, on Dec. 8, 1953, said: ‘I consecrate my body and my soul to you (…) everything that I am and everything that I possess.’”

Concluding his homily, Cardinal Semeraro said: “Poland, the Nation of Mary, the land of saints and blesseds, in this Temple of Divine Providence, through the intercession of the Virgin Mary, Blessed Stefan Wyszyński and Blessed Elżbieta Róża Czacka, today let us ask God to grant us the strength to be faithful witnesses of His merciful love towards every needy person of our time.”

“May the new blesseds be powerful intercessors for this meritorious nation, may they be a light for state and local authorities, and may support the Church in Poland in constant fidelity to Christ’s Gospel.”

When My Friend Cussed in Front of...