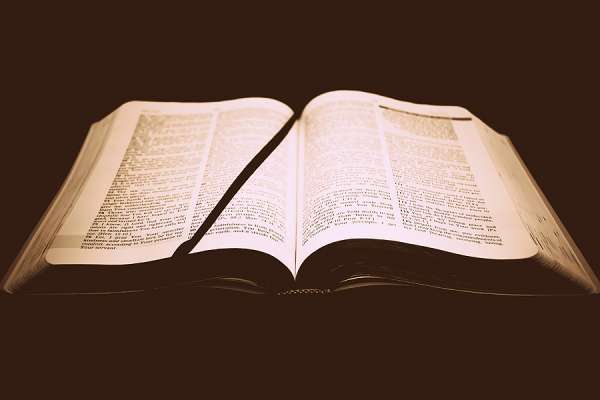 Washington, D.C. Newsroom, Jan 8, 2021 / 05:02 pm (CNA).- A Catholic podcast featuring a priest reading and analyzing the Bible has been at the top of the Apple Podcast charts since Jan. 2, ahead of secular podcasts produced by such organizations as The New York Times, NBC News, and NPR.

“The Bible in a Year (With Fr. Mike Schmitz),” produced by Ascension Catholic Faith Formation, part of Ascension Press, features episodes containing two to three scriptural readings, a reflection on those readings by Fr. Mike Schmitz, and a prayer. Each episode is about 15 to 25 minutes long, and a new episode is set to be released each day of 2021.

Instead of reading the Bible from cover to cover, the podcast follows “The Great Adventure Bible Timeline,” which was developed by Jeff Cavins. Schmitz, a priest of the Diocese of Duluth, told CNA that this approach, which centers on “14 critical narrative books” interspersed with the remaining non-narrative books, helps to maintain the story structure of salvation history.

“A lot of times, what derails people is when they’re reading the story of Genesis and Exodus and Numbers, and all of a sudden they read Leviticus and like, ‘wait, I lost the story now,’” Schmitz told CNA in a Jan. 7 interview.

“So what we’ve done is we built those other books, those non-narrative books around the narrative story or on the narrative,” he said.

“And so one of the things that it is doing is it keeps people connected like, ‘Oh, okay, now this makes sense that here you are in the wilderness, and that’s why we’re reading Leviticus, because this is where God needs to give his people the law regarding the tabernacle.’”

The “timeline” approach also means that listeners will not have to wait until very late in the year to hear about Christ.

“If we (read the Bible) straight through like that, we wouldn’t get to the New Testament until I think November,” said Schmitz. “So it was like, ‘that is not good.’ We’ve not spent 10 months not talking about Jesus very clearly.”

To help remedy this, Schmitz said there will be four “messianic checkpoints” that will introduce listeners to Christ. The first of these will occur “right around day 90,” and will consist of the Gospel of John over the course of about a week.

“I’m really excited about that. Just to be able to say, in the midst of this Old Testament story, ‘here is the revelation of Christ,’” said Schmitz.

Catholics in America read the Bible less often than do Protestants. Schmitz believes that this is due in part to how Catholics are accustomed to having Scripture “proclaimed” to them at Mass.

Despite this, Schmitz thinks that “we still have this hunger to know,” and that many people are discouraged by the “daunting” nature of the Bible. He hopes his podcast, with its unique formatting of salvation history with a timeline, changes this perception.

“And I think that that for a lot of people just makes something that might seem inaccessible, accessible.”

The success of the podcast took both Schmitz and Matthew Pinto, CEO of Ascension Press, by surprise. Schmitz said that he has been warned by his friends and family to “not let (the success) go to his head,” something he says never even occurred to him.

“I’m thinking like, ‘well, I’m literally reading the Bible.’ So I don’t know how much that could go to my head,” said Schmitz.

“I think that it’s, it’s very clearly less about me, and the fact that it’s me reading the Bible, and far more about, I think, people’s hunger” for God’s word, said Schmitz.

Pinto was willing to credit Schmitz with at least some of the show’s success.

“We knew it was going to be a great program, but clearly this has struck a nerve beyond, really what we expected,” Pinto told CNA in a phone interview Jan. 7. “Our first thought
was that, for some reason, God has anointed this particular project.”

Pinto credited the “charism of Fr. Mike and the uniqueness of the Bible timeline” as two of the factors behind the success of the show–along with God’s blessing, of course.

The success of the show caught Ascension “flat-footed,” said Pinto, and The Great Adventure Catholic Bible, which the show is centered around, sold out. Pinto told CNA it should be available again to order in the coming months.

God has, said Pinto, given the podcast “a special grace that is beyond simple human explanation.”

“And, so it’s our hope that we will just be good stewards of it, and really use this as an opportunity to expand and reach, even more. So we’re not going to stop at really where it is,” said Pinto.

“We’re going to ask God for additional blessing, and work as hard as we can to, to get the Word of God out to as many people as we can using this most unique method.”

“She Will Come”: The Supernatural...