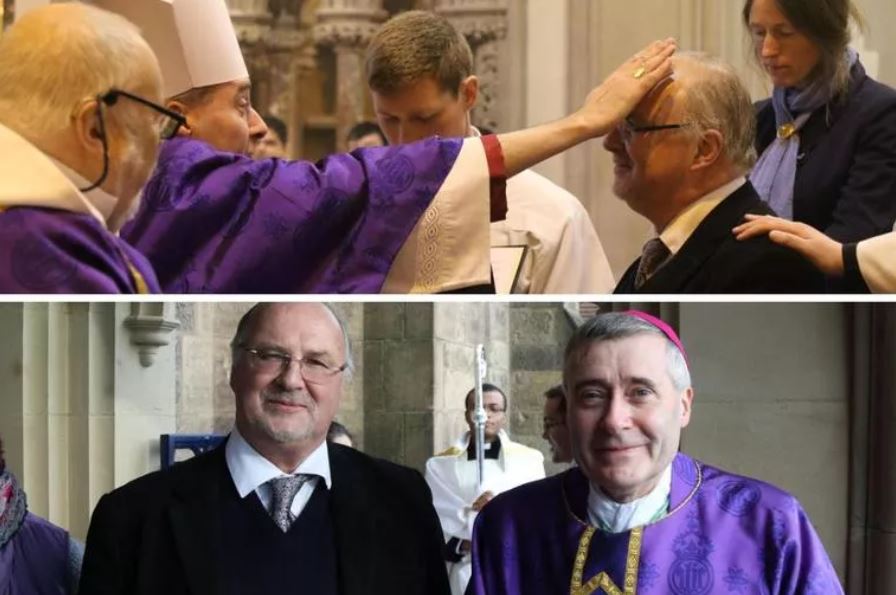 On Dec. 22, 2019, the Fourth Sunday of Advent, at Shrewsbury Cathedral in England, Bishop Mark Davies received Gavin Ashenden into the Catholic Church. (photo: Courtesy of the subject/taken by Simon Caldwell)

Following his conversion, the former chaplain to the queen is at peace and at work for the Church.

LONDON — “I had not expected the great sense of peace and clarity of mind that has come with being a Catholic,” says Gavin Ashenden, speaking to the Register May 11.

Given the global impact of the COVID-19 pandemic, few will remember 2020 as a year of “peace.” However, for this Catholic convert, peace seems to be the legacy of the last year.

It was Dec. 22, 2019, when Ashenden made headlines across the world. His reception into the Catholic Church was of interest to the secular media because, at one time, he had been Anglican chaplain to Her Majesty Queen Elizabeth II.

Just over a year on from his reception into the Church, Ashenden spoke to the Register about his first 12 months as a Catholic, and the increasing numbers who are turning to him for advice, desiring to follow the same path as his faith journey. The Register last spoke to Ashenden in early March 2020.

It is not just peace that Ashenden feels since becoming Catholic, however, but relief, too.

“Life as an Anglican Protestant always involved a series of contested variables,” he explains, “which went to the heart of what constituted authenticity in the Church [of England], often made worse by trying to judge things by how much the laity, as consumers, liked them.” He sees the “wonderful settled continuity” of the Catholic Church, with regard to religious orders and the sacraments “as opposed to a Protestant incoherence and consequent turmoil,” as both “a relief and a constant delight.”

Until the end of 2019, Ashenden was very much part of the Anglican establishment. The shockwaves following his “swimming the Tiber” were felt and noted throughout England’s established church.

He sees his conversion to Catholicism, however, as part of a wider and continuing movement in that ecclesial body. He suggests that there is “a seriously large group of people [who] know the game is up with Anglicanism but are terrified of leaving it. They are beginning to share the perspective that began to clarify [for me] about 20 years ago: that Anglicanism was a 400-year-old ecumenical experiment that had suddenly and terminally failed.”

His prognosis is a gloomy one for England’s state religion. He sees its eventual “collapse into a secularized progressive Protestant splinter group,” which, in turn, will ultimately lead to its disappearance.

Speaking of those Anglicans thinking of leaving to enter the Catholic Church, Ashenden is quick to recognize that “they are hampered in the journey of the return to the mother Church by a range of difficulties that stretch from misunderstandings to practicalities.” That said, Ashenden recounts how many individuals he has helped make the journey “to Rome”: At least 24 people, he reckons, over the past 12 months, have become Catholics through direct conversation with him.

“Considerably more tell me that they are very seriously considering it, and there will be more beyond that, but have not reached out personally,” he adds.

At a time when, for one reason or another, many Catholics are discouraged, this makes for interesting listening. Ashenden says that, in this last year, there has been what he describes as “a serious movement of the Holy Spirit doing all that can be done to unite the Church.”

What is adding impetus to this movement, he perceives, is an “increasing sense that the persecution the Church is experiencing in our generation in different parts of the world is tragically growing more widespread and will come to much of the Church in the West.”

When it comes to state repression of religion, Ashenden has firsthand experience.

In 1980, at the age of 26, he became an Anglican clergyman. Thereafter, for 10 years, he worked in various parishes across London. At the same time, however, he was involved in smuggling Bibles and medicine into the former Soviet Union.

In 1982, he was arrested for these activities. Subsequently interrogated by the KGB, he was eventually released. More than most people, therefore, he is aware of how things can change dramatically, rapidly and negatively in a nation. Thus he wonders if it is only a matter of time before a new persecution is upon believers in the West. It is this sense of limited time left to prepare for such persecution that motivates him to act now.

To this end, since becoming Catholic, Ashenden has been active in what can only be described as a “media apostolate.” He explains that this apostolate has developed “slowly and steadily,” but is now gathering apace on a daily basis. For example, his recent YouTube commentary on Jordan Peterson has had, so far, 75,000-plus views.

“COVID,” he says, “has given us new opportunities to become more imaginative and responsible in using social media to reach out to pierce the ignorance of secular consumerism with the love of Christ and the redemptive power of the Church.”

For a total of 23 years, from 1989 to 2012, he worked both as a senior lecturer and university chaplain at the University of Sussex, teaching the “Psychology of Religion and Literature” and convening a master’s program in monotheist mysticism. Today, he seems ideally suited to his new online apostolate with those seeking truth. And while clearly recognizing that many hesitate to enter the Church “for a wide variety of reasons,” he is still keen “to encourage people not to be trapped by images of Catholicism that are deceptively wrong, and instead to read the testimonies of so many who have found coming home to the Mother Church to be a moment of unforgettable rejuvenation and clarification of authentic Christianity.”

While preparing for this interview, Ashenden received the following email, which he shared with the Register:

I have just returned from meeting with Fr. Mark.

I am officially on my way Home to Rome!

Depending on a few things, I could be received in at the end of this month.

Glory be to God.

And thanks also to you, who relit that first spark.

May God continue to bless you as you bless others through your online presence.

Has he received any word from the palace? “The poor palace can’t get away from me,” he replies good-humoredly. “The media kindly returns to me regularly, as an ‘ex’ chaplain to the queen, to give me a platform for commentary.”

Appointed chaplain to Queen Elizabeth in 2008, he held the position until 2017, when he resigned after a passage from the Quran denying Christ’s divinity was read at the Glaswegian cathedral of the Scottish Episcopal Church. Now, 13 years on from his appointment as royal chaplain, Ashenden feels the British monarchy is about to “face a very serious problem deciding what will happen following the death of the queen and the ensuing coronation service for Charles [when] challenged by secular and Islamic voices who will want to make the concept of monarchy less exclusively Christian.”

After such a tumultuous year as a new Catholic, one wonders what hopes Gavin Ashenden nurtures for the next 12 months.

“My personal hopes are for a continuation of my apostolate of mission and reconciliation,” he says. And for the wider Church, he hopes there will be “a clarification of vision so that we are able to reach out with a more urgent energy, a clearer focus and a deeper commitment to those in our culture who know very little as yet of the Good News of salvation.”

Celebrate the Ignatian Year With a...

Malta’s president: I would rather...