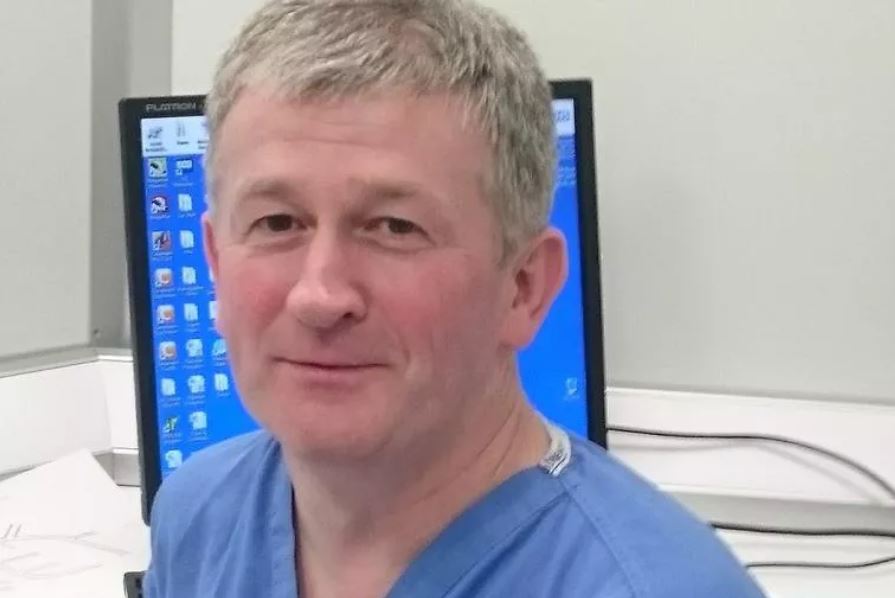 Dr. Dermot Kearney is one of two Catholic doctors currently under investigation from U.K. medical authorities for treating women who want to reverse their abortions. (photo: Courtesy of subject)

LONDON — “A number of allegations were made against us, all related to our providing a progesterone-based abortion-pill rescue service for women seeking to save their babies after they had taken the first abortion pill Mifepristone and who regretted that decision.”

Dr. Dermot Kearney, one of two Catholic doctors currently under investigation from U.K. medical authorities for so doing, spoke with the Register about his interventions to reverse chemical abortions. If found against, he and his co-defendants could face being removed from medical practice in the United Kingdom.

“These women had no one else to turn to,” said Kearney, 56. He offered this treatment for the first time in late June 2020. Many women requested the rescue treatment, he explained, to help them preserve their pregnancies after regretting their decision to take Mifepristone.

After a number of pro-life organizations had approached the U.K.’s Catholic Medical Association (CMA) asking for medical help for these women who had changed their minds on having taken abortion pills at home, Kearney, a consultant cardiologist and general medical physician working in Britain’s National Health Service, discussed the situation with other doctors, as well as “the safety, efficacy, legal and indemnity aspects, practicalities of prescribing and procurement of progesterone and the variety of progesterone regimens” before he committed to establishing and supporting an abortion-pill rescue service in the U.K. He pointed out that as an intervention “this process took several years of deliberation and was very carefully considered.”

Nevertheless, on May 12, Kearney and Dr. Eileen Reilly, both members of the CMA, were made the subject of “Interim Orders Tribunal” hearings following complaints to the U.K.’s General Medical Council (GMC) brought by abortion provider MSI Reproductive Choices, formerly known as Marie Stopes International and the Royal College of Obstetricians and Gynaecologists. Effectively, this interim order prohibits the doctors from helping any woman who requests help in obtaining abortion reversal.

Kearney suggested that the majority of women whom he and Reilly helped came to them through an online search.

“Abortion-pill rescue is largely unheard of in the U.K., but every day some women regret that they have made a decision to abort their babies after they have taken Mifepristone,” he said. “Many do not know what to do. Some decide to look up ‘abortion reversal’ on the internet.”

Often, he says, these women find sites such as the U.S.-based Heartbeat International.

“If they have the courage to contact the helpline or website, they make contact with one of the trained nurses who discusses with them the process of abortion-pill rescue using progesterone therapy. If the pregnant woman is happy to proceed with rescue therapy, she gives permission for her contact details to be passed to a U.K.-based doctor who may be able to help her. That was either myself or Dr. Reilly,” added Kearney.

The doctors would then make contact with the woman to offer assistance. These self-referrals came from across the U.K, and Kearney stated that he had discussions with 92 women seeking help or wishing to discuss the option of abortion-pill rescue between June 2020 and late April 2021. He estimates that his colleague Reilly had consultations with about 50 women over a similar period of time.

“We believe,” said Kearney, “that approximately 90 of these women started progesterone therapy following initial discussions and after we had managed to find a local pharmacy that could dispense the medication to them. Of these 90 women, we believe that about 70 of them actually commenced and continued the treatment that had been prescribed for them.”

“To date, 12 babies have been born, all healthy, and we know that another 25 women are still pregnant, at various stages of gestation,” Kearney said. “This gives an overall success rate of just over 50% for those who received and continued the progesterone rescue therapy.”

What has been the emotional reaction of women offered this treatment?

“The vast majority of women that we have tried to help are very grateful,” observed Kearney, “not only for the help they have received in the form of a prescription to help them save their babies, but also for the emotional and follow-up support that they have received.” When the treatment is unsuccessful, he is aware that it is “heartbreaking” for the mothers who lose their babies in such circumstances. But, even then, he says, “there is tremendous gratitude” among these women “that somebody has tried to help them in their hour of need.”

Kearney spoke of the “tremendous joy when the treatment is successful” and, in particular, the joy of the mother.

“I am always relieved when we manage to reach the 15-week stage of gestation without any serious complications, especially if the Mifepristone and subsequent rescue treatment was administered early in the first trimester. Once the 15-week stage is safely reached, there is a tremendous sense of relief, although there is still always a possibility that some babies might not survive even after that point has been reached. I cautiously inform the mothers whom we treat that it only takes one pill to kill a baby, but it takes several weeks of rescue treatment to save the baby. In general, once 15 weeks has been safely reached, the risk of losing the baby is about the same as in any normal pregnancy where no Mifepristone has been administered.”

Given the censoring Kearney has experienced, is the problem with such treatment in the U.K. Is this abortion-reversal treatment illegal?  “No, the treatment is not illegal,” stated Kearney. “Those who oppose the use of progesterone for abortion-pill rescue try to claim it is ineffective and potentially dangerous and that it not licensed for this use. So far, no one has tried to say it is illegal.”

Kearney said there is “no evidence to support the view that abortion-pill rescue using progesterone is ineffective.” Furthermore, he maintains that “the ‘evidence’ presented to support the view that it is potentially dangerous is extremely tenuous and highly questionable.” He concedes that, although licenced for other uses, “it is correct to say that progesterone is not licensed in the U.K. for preventing miscarriage following Mifepristone ingestion.”

However, the use of drugs for treatment other than those licenced is not so unusual, observed Kearney.

“It is important to realise that many commonly used drugs are prescribed and administered ‘off-license.’ Misoprostol, the second drug used in medically induced abortions, is not licensed for that use.”

This has left Kearney wondering why the GMC is considering “striking off” the two doctors involved. The allegations brought against them are as follows: that they present a serious danger to the lives and health of women, or that they prescribed a potentially dangerous medication with no evidence base for its use in this context, or that they were trying to impose a belief or ideology on vulnerable patients. If found guilty of what amounts to “serious professional misconduct,” then Drs. Kearney and Reilly could be “struck off” the medical register and not allowed to practice medicine in the U.K. for at least five years, possibly for life.

Despite this threat, Kearney sees his duty as a doctor to respect and protect human life.

“Maybe I was a little naïve in thinking that,” he admitted. “It may be that some persons in the abortion business do not like doctors speaking publicly about the humanity of the unborn and the need to help mothers in distress who desperately want to save their babies’ lives after they have made a bad choice that they now regret.”

He recognizes that his actions in regards to abortion reversal treatment may upset some, “as providing this service confirms that some women change their minds about continuing with abortion, even after they have taken the first abortion pill. That raises some awkward questions, such as ‘why are women changing their minds at that point?’” He also feels that it calls into question “the adequacy or possible absence of any proper counseling before such devastating and life-changing decisions are made.”

Given that both doctors involved in this disciplinary matter are Catholic, Kearney said his faith plays a vital role.

“Faith is, of course, very important,” he said. “The amount of prayer and support that Eileen [Reilly] and I have received from all over the world has been overwhelming, and I have no doubt that much good will arise from this episode.”

He cites as inspiration a Bob Dylan song lyric that asks: “How many times can a man turn his head and pretend that he just doesn’t see?” (Blowin’ in the Wind) “As a teenager, I was inspired by that question and realized that we are all called to try to make a difference.”

Ultimately, Kearney’s thoughts, however, are on the eternal rather than the temporal.

“In dealing with these trials that have lately come my way, I am reminded of the actress Patricia Heaton when she was asked why she is not afraid to give witness to her faith among celebrity and Hollywood elites,” he said. “I take her response and adapt it. On Judgment Day, it won’t be the GMC that I have to stand before and give account of my life.”

Why is a French Catholic archdioce...