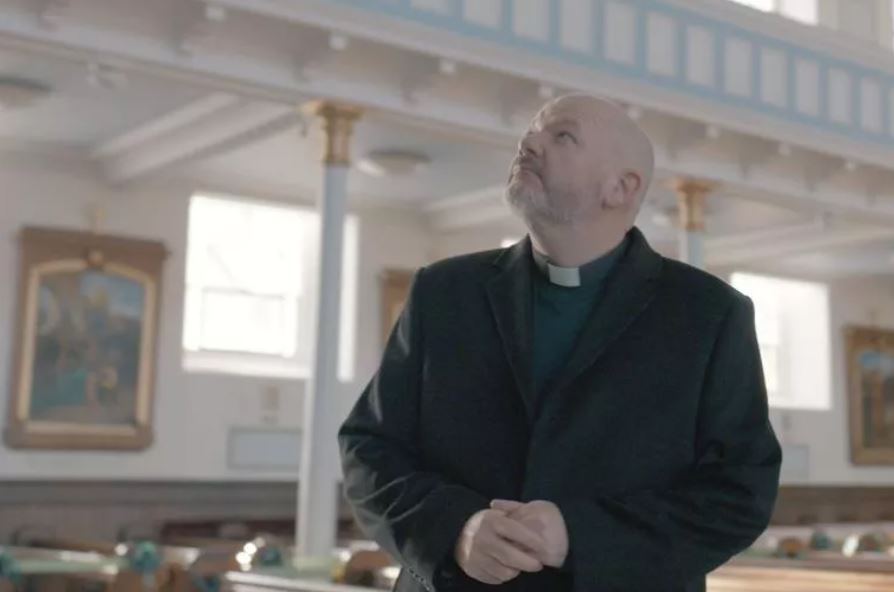 Canon Thomas White goes to court to free the Mass.

“Freedom of worship is a human right, and receiving the sacraments is as vital to me and my parishioners as food and water.”

Canon Thomas White spoke March 11 to the Register during a short recess from his ongoing legal challenge — taking place remotely — to the COVID-19-related church closures in Scotland.

The Glasgow-based priest is challenging the Scottish government’s current ban on public worship. Scottish worshippers currently face criminal penalties for going to church, in contrast to other Catholics across Britain who can continue to attend Holy Mass in churches with safety measures in place.

Canon White is a priest of the Archdiocese of Glasgow and the dean of the City East St. Alphonsus Church. His parish is in the center of Glasgow and includes the site of the martyrdom of the Scottish Jesuit St. John Ogilvie, whose feast day is March 10. The 17th-century saint is the priest’s inspiration and unofficial patron of his legal action.

Today, as in the days of St. John, public attendance at Holy Mass is, observes Canon White, forbidden. He sees his legal action as concerned as much about challenging the power of the state to close churches to public worship, even in a time of pandemic, as it is about pastoral need.

“As a priest,” said Canon White, “I have witnessed firsthand the grief and suffering that COVID-19 has caused for my parish members. Therefore I know, as a priest, that we need to open my church to be able to support them best in their hour of need.”

Canon White is under no illusion about the threat posed by the virus to his parish community. In his parish alone, he has conducted 60 COVID-19 related funerals. Also, recently, Canon White lost his father to the virus. But he has witnessed, too, the ongoing need of his parishioners for the sacraments during this time.

The 46-year-old priest is funding his legal challenge via a fundraising page online.

Supporting Canon White’s legal challenge is the U.K.-based human-rights group ADF International. “Freedom of religion is a foundational human right,” said Ryan Christopher, director of ADF International in the United Kingdom. “We support Father Tom White’s efforts because domestic and international law require the government to protect freedom of worship, including in public or in private, individually or in community with others. This right should be limited only to the extent that is necessary and proportionate.”

Christopher went on to suggest that the U.K. government’s medical advisers had conceded there is no robust medical evidence for the closure of churches, many of which, he points out, remain open in most European countries.

“We must find solutions which protect both the vulnerable and those who understand their communal worship to be as essential as food and water,” he added.

Canon White is grateful to ADF International for their ongoing support.

“I am most encouraged by their support for lifting the ban on public worship, an issue which is weighing heavily on the heart of my community at this difficult time. I speak for many in the Church when I say that it’s very important to keep people safe and well during this pandemic. But this can and should be done while also allowing people to fulfill their need to draw close to God and worship in community at the church.” As he pointed out, with appropriate safety measures, the same accommodation can be made for Scottish Catholics as it has for their co-religionists in other parts of the U.K. This is something the Scottish bishops have also strongly argued.

The U.K. government’s chief scientific officer, Patrick Vallance, has stated that while there could be transmission traveling to and from a place of worship, he admitted that any evidence for that was merely “anecdotal” rather than “scientific fact.” Similarly, the U.K.’s chief medical adviser, Chris Whitty, also affirmed that “all the faith communities in the U.K. have been extraordinarily responsible in the way they’ve tried to address this” and acknowledged that there was only “very weak” data implying transmissions arising from COVID-secure church services.

English authorities have allowed churches to continue to be open for public services with strict hygiene requirements in place. Wales and Northern Ireland have adopted a similar approach. Only Scotland remains without communal worship.

Canon White believes churches can be opened safely, “and in a manner much safer than we are seeing in retail.” He points out that beside his church there are a number of retail outlets where there are often huge crowds and little social distancing — certainly less than was expected of and practiced by churches when allowed to open.

Canon White’s church has a capacity of around 1,200 people; and on Sunday it has an average attendance of between 250 and 300 parishioners. He feels they can be safely accommodated before, during and after any service.

Canon White serves a parish community in Calton, Glasgow, which, according to census data spanning from 1971 to 2011, contains three of the most deprived areas in the whole of the U.K. Life expectancy in those areas was measured in 2006 as being lower than that in Iraq, North Korea and the Gaza Strip. Now, the recent pandemic has added yet more suffering to the parish community. The need for the Church to offer comfort and hope at this time is, Canon White says, the primary motivation of his actions.

The Glasgow priest is not the only person of faith to mount such a legal challenge to the Scottish ban on communal worship. Ministers from a range of Christian denominations, including from the Church of Scotland and the Free Church of Scotland, with the support of Christian Concern, have taken legal action against the ban on public worship.

The Scottish government’s position demands scrutiny because, while forcing the closure of all churches, other “essential” businesses — including garden centers, DIY stores, bicycle shops — remain open. For Canon White, this paints a depressing picture of Scotland’s priorities: “What it says is that religion is classed as ‘nonessential retail’ by the Scottish government.” In fact, during the course of the court case, Canon White has seen government documents classing churches as “nonessential contact.”

The Scottish legal case is just one of a wave of similar challenges to bans on public worship being mounted across Europe. In Switzerland, France and Germany, courts have ruled that the complete suspension of corporate worship is not proportionate to the situation.

Lois McLatchie, a communications officer for ADF International and originally from Scotland, told the Register, “Why should Scots be denied the freedom afforded to our English neighbors? Authorities in other countries have found a way to protect the public while also respecting the rights of religious communities. It is unclear why the Scottish government cannot do the same. Churches have much to offer during this difficult time. The government should not disadvantage the people of Scotland by failing to account for the moral and legal case for public worship.” She added, “We’re so pleased to be supporting Canon White’s courageous action, as he takes a stand for freedom of faith in Scotland. Unlike shopping or visiting a bank, freedom of worship is a fundamental right worthy of protection. We hope that his bold action will prevent a disproportionate ban on churches from reoccurring in future.”

The latest restrictions in Scotland were imposed earlier this year. A statement on the Scottish government website reads as follows: “From 8 January 2021 places of worship located within an area having Level 4 restrictions must close for communal worship and individual prayer, until further notice. This means that places of worship are effectively closed for both congregational worship and individual prayer.”

Due to the lessening of the severity of the pandemic (and some would say the forthcoming Scottish election in May), the Scottish National Party-led Scottish government has been considering a partial reopening of places of worship, but with severe restrictions on the numbers able to attend.

On March 11, shortly after speaking to Canon White, the Register learned that the Scottish government has announced that believers across Scotland will be permitted to gather at places of worship from March 26, with up to 50 worshippers allowed to attend religious services on condition that 2-meter social distancing is maintained. However, a final decision about places of worship reopening in Scotland will not be taken until March 23.

The Scottish Bishops’ Conference, while welcoming any lessening of the current ban on worship, would prefer that Church leaders be trusted in helping safeguard their congregations. A statement issued March 1 stated, “As Scotland’s Catholic bishops, we welcome the recent announcement by the First Minister [of Scotland] foreseeing a return to our churches for the most important celebration of the liturgical year at Easter. We also welcome the recognition of the status of public worship implicit in this decision. … At the same time, we anticipate ongoing dialogue with the Scottish Government regarding the requirement of a numerical ‘cap’ on the number of worshippers. … We maintain that it would be more appropriate for each church building to accommodate a congregation in proportion to its size rather than on the basis of an imposed number.”

Canon White’s initiative finds support with Bishop John Keenan of Paisley. He told the Register the issue being decided in court is as to whether in attempting to contain the spread of the virus the Scottish government acted proportionately in restricting the right of Catholics in Scotland to go to Mass.

“It will also,” he added, “have regard to the evidence the Scottish government had that public worship was not a particular contributor to the spread of the infection in the light of the ‘best in class’ infection-control measures our churches had been careful to put in place.”

This use of a judicial review, Bishop Keenan said, is “a legitimate instrument open to citizens to test the validity of local laws. It is also a process that parliaments can welcome in helping them verify that their laws are in harmony with the human rights of their citizens.

“Canon Tom White is asking the Scottish courts to determine whether Parliament acted lawfully in its restriction of Article Nine of the European Convention on Human Rights, which enshrines the right to freedom of worship or, in our case, the right of Catholics to attend Mass.”