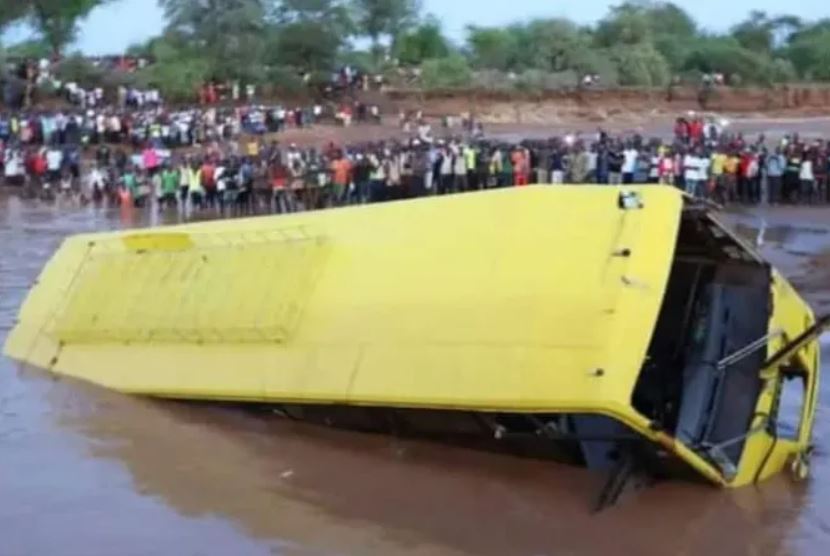 At least 33 Catholics were killed Dec. 4 when a bus fell into a river in Kitui County, Kenya. / Courtesy Photo

At least 33 people, including children, were killed Saturday on their way to a wedding, in a tragic accident involving a bus falling into a river in southeastern Kenya.

More than 60 people were on the bus in the Diocese of Kitui Dec. 4, when the coach plunged into the Enziu River as it tried to cross a submerged bridge, ACI Africa, CNA’s African news partner reported.

Reports say that around 20 members of a Catholic parish’s St. Cecilia Choir, two religious brothers, and several flower girls are among the dead, all of whom were supposed to be guests at a wedding at St. Joseph Nuu Parish in the Diocese of Kitui, a territory east of Nairobi, which serves over 230,000 Catholics.

The bus belonged to the St. Joseph Minor Seminary. In video footage reviewed by ACI Africa, the driver of the bus can be seen attempting to navigate the vehicle over a submerged bridge before it fell into the river.

Locals and multiple Kenyan agencies, including divers from the Kenya Navy, were part of the rescue operation, which managed to save around half of the passengers, according to local media reports.

Media also reported that the bus driver, Br. Stephen Kang’ethe, a member of the religious order the Brothers of St. Peter Claver, had waited two hours before deciding to attempt crossing the river. Kang’ethe and his fellow religious, Br. Kenneth Wanzala Okinda, have both been confirmed dead.

The wedding was a marriage convalidation for the brother of a Kitui priest, Father Benson Kityambyu, who lost 11 family members in the accident.

Two daughters and two grandchildren of the couple receiving the sacrament of matrimony were reportedly killed in the tragedy.

The bus was pulled from the river Dec. 5 by a crane.

The governor of Kenya’s Kitui County, Charity Kaluki Ngilu, wrote on social media, that “the ill-fated bus wreckage has been retrieved from the river bed and the process of ascertaining whether there are any more bodies still trapped in the wreckage or the river bed continues.”

Kenya’s President Uhuru Kenyatta led the nation in sharing his condolences to the bereaved families and wishing a quick recovery to those who were injured.

Praising the Masculine Virtues of...