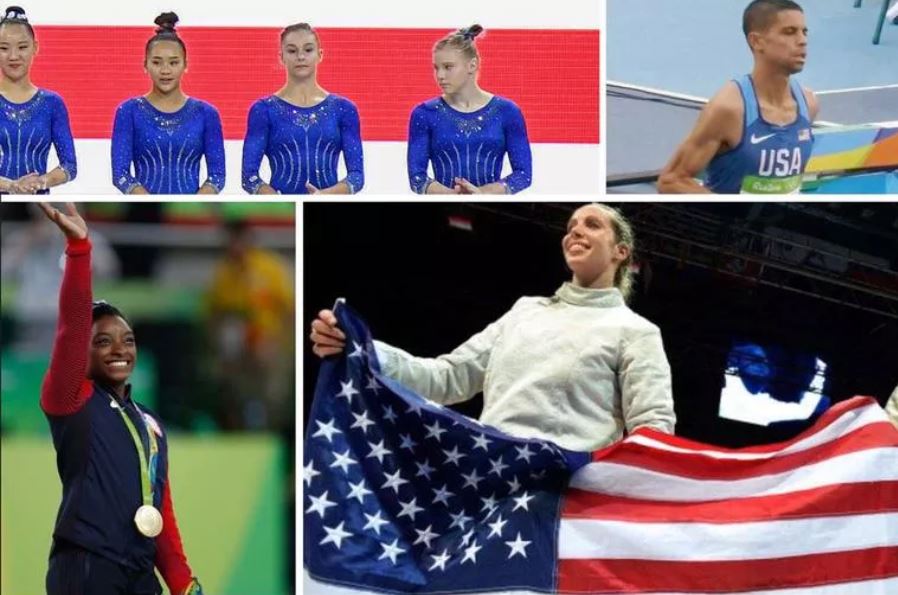 This summer many of those athletes whose God-given talents are on display arrive in Tokyo formed in some way by their Catholic faith or education.

The Olympic Games are known to feature the greatest athletes in the world, and this summer many of those athletes whose God-given talents are on display arrive in Tokyo formed in some way by their Catholic faith or education.

The U.S. gymnastics team features two Catholic champions who have been open about their Catholic faith. Black Catholic Simone Biles returns to the Olympics as a champion with “the Greatest of All Time” status. Biles pushed herself to even greater heights of excellence, demonstrating in May her mastery of the extremely difficult and dangerous Yurchenko double pike vault, which many suspect she may deploy at the Summer Games in Tokyo.

Biles’ fellow Catholic and gymnast Grace McCallum, who travels with a rosary and a cross from her grandmother, told Relevant Radio’s Morning Air, “My Catholic faith has been such a huge part of my journey and keeps me grounded in who I am.”

McCallum said she prays before meets and practices, remembering her parents’ advice to “compete for an audience of one,” keeping Jesus Christ front and center. She also prays the Prayer to St. Michael right before hitting the mat, “to give me that last little bit of strength before I go up.”

“[My faith] makes me feel at peace, which is why I compete with a rosary and cross from my grandma when I travel,” she said.

Faith also plays a key role in the lives of some of the Olympic runners in this year’s games.

Long-distance runner Galen Rupp, reported by Runner’s World magazine to be a devout Catholic and a graduate of Portland, Oregon’s Central Catholic High School, is headed for his fourth Olympics, after winning a silver medal in London (2012) and a bronze at Rio de Janeiro (2016).

Sydney McLaughlin, an outspoken Christian and graduate of Union Catholic Regional High School in New Jersey, gave “all the glory to God” after setting a new women’s world record for 400-meter hurdles in just under 52 seconds.

“Honestly, this season, just working with my new coach and my new support system, it’s truly just faith and trusting the process,” she told NBC after her win.

“I couldn’t ask for anything more. Truly, it is all a gift from God.”

McLaughlin explained that while there are a lot of things an athlete cannot see coming in preparing for the Olympics, it was key to have both a “childlike faith that everything is going to work out” and a coach who understands that.

Middle-distance runner Matthew Centrowitz Jr. is returning to the Olympics to defend his title as the reigning champion for the 1,500-meter race. Centrowitz comes from a Catholic family remembered for their faithful witness, especially as a family attending church together.

“He certainly was a respected member of our community and a role model,” said Julie Scheide, Centrowitz’s ninth-grade catechism teacher at St. Andrew by the Bay parish in Annapolis, Maryland.

Mariel Zagunis, a four-time Olympic champion fencer (sabre) and first American to win a gold medal in fencing, aims to cut down the competition once again in Tokyo. Raised Catholic, Zagunis at the outset of her career credited the values she learned from the Valley Catholic Schools in Oregon for her success.

“Going to a small Catholic school has helped me in every aspect of my life,” Zagunis said in a 2004 interview with the Register. “It helped because of the moral support of the teachers and staff and the rest of the students, who mostly come from good families.”

Sister Adele Marie Altenhofen, of the Sisters of St. Mary of Oregon, who is the president of the Valley Catholic Schools, said Zagunis has really demonstrated the school’s values of “living valiantly, striving for excellence, honoring the unique gifts of each person, and celebrating God and life.”

“She’s a very humble person,” Sister Adele said, noting that Zagunis continues to come back to the school to speak with students and now sends her daughter to the school.

Valley Catholic’s unique formation likely had a positive impact on the world-class fencer.

The school’s campus includes both an early-learning center for babies as young as 6 to 8 weeks old and a nursing home for elder adults. Sister Adele said the school’s philosophy is to teach students to care for life from “cradle to grave” and show the value of life from “the womb to the tomb.”

Curtis Tomasevicz, gold medalist at the 2010 Winter Olympics in Vancouver in bobsledding, is now the director of sports performance with USA Bobsled and Skeleton.

He told the Register that the Catholic faith has been a huge part of his life. Because the Olympics are so all-consuming for each athlete in their journey, he said “putting Christ first” really kept him grounded, especially in the face of distractions from competition.

“You can’t separate athletics and my faith; they’re intertwined in so many different ways,” he said, adding that the physical and mental preparations included going to Mass before competitions and praying before the competitions or even just practice.

“In so many ways, it was part of just … my routine every day,” Tomasevicz said.

Former Olympic athlete Rebecca Dussault, a cross-country skier who competed at the 2006 Winter Olympics in Turin, told the Register that the realm of sport does not make many concessions for the lives of faithful Catholics and requires a lot of sacrifices, especially in the journey to the Olympic Games. “I had to get extremely resourceful,” she said, sacrificing team meals on Saturday evening in order to attend the vigil Mass because she had to compete on Sundays.

Dussault said it is important to have coaches behind athletes that understand their core values, especially in individual competition.

“The fullness of the games just presents challenges,” she said, wishing Mass had been more available for athletes in the Olympic Village.

But she said the encouragement she received from Catholics who told her that they were praying for her was very helpful.

Dussault said it was important to shine a light on the virtuous models in sports that are on display at the Olympics and for Catholic Olympic athletes to make their experience a gift to others.

“The formation you receive as an athlete and as disciple in Christ is invaluable in this world that seeks so much comfort and escapism,” she said.

“As an athlete, you can’t be comfortable, and you can’t escape. It gives you the ability for a really unique leadership. It calls us to give back and make sure that we’re forming the next generation of athletes for Christ.”
Share With:
Previous Article