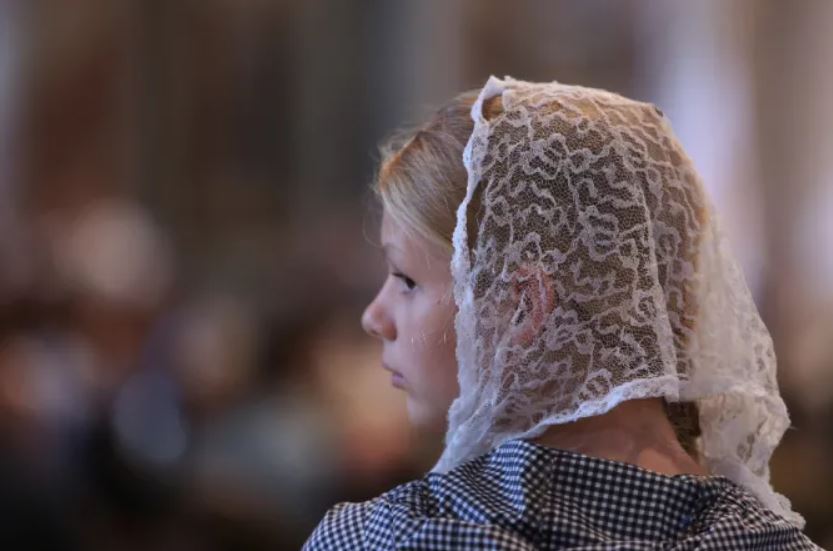 A girl with a chapel veil at the Summorum Pontificum Pilgrimage Mass in Rome on Oct. 25, 2014. / Daniel Ibáñez/CNA.

Many Catholics reacted strongly to the promulgation of Traditionis custodes, a motu proprio signed by Pope Francis on July 16, offering pithy comments on Twitter as well as more detailed takes.

In the motu proprio, the pope made sweeping changes to his predecessor Benedict XVI’s 2007 apostolic letter Summorum Pontificum, which acknowledged the right of all priests to say Mass using the Roman Missal of 1962, which is in Latin.

The new document is dedicated to “the use of the Roman Liturgy prior to the reform of 1970” and contains eight articles that go into immediate effect.

In an accompanying letter to bishops, Pope Francis wrote: “In defense of the unity of the Body of Christ, I am constrained to revoke the faculty granted by my Predecessors. The distorted use that has been made of this faculty is contrary to the intentions that led to granting the freedom to celebrate the Mass with the Missale Romanum [Roman Missal] of 1962.”

Joseph Shaw, the chairman of the Latin Mass Society of England and Wales, told CNA that the motu proprio appeared to “undo entirely the legal provisions made for the Traditional Mass by Pope Benedict, and to take us back not only to the situation before the 2007 apostolic letter Summorum Pontificum, but even before 1988, when Pope John Paul II — who was canonized by Pope Francis — described the more ancient Mass as a ‘rightful aspiration’ of the faithful.”

“The many priests and lay Catholics who have worked hard to combine an interest in the ‘riches’ represented by the EF [Extraordinary Form] with sincere loyalty and affection for the hierarchy and the Holy Father have been let down by this document,” Shaw said.

He added: “The provision that the EF not be celebrated in parish churches appears to be unworkable, and will certainly impede the implementation of this document.”

Kurt Martens, a professor of canon law at Catholic University of America, noted that the term “extraordinary form” is no longer used in the new legislation and that the new motu proprio “establishes that liturgical books promulgated in conformity with the decrees of Vatican Council II are the unique expression of the lex orandi of the Roman Rite.”

“Diocesan bishops are given broad responsibility with regard to the use of the former liturgy,” Martens noted on Twitter.

Some Catholic blogs that promote traditional liturgy expressed anger at the changes.

Others had even stronger views.

New York Times columnist Ross Douthat commented: “Accompaniment for some, slow strangulation of their rites for others.”

Others called for prayers for the 84-year-old pope, who was discharged from hospital this week following colon surgery.

Writing on the New Liturgical Movement website, Gregory DiPippo said: “We must redouble our prayers for Pope Francis, whose whole papacy, every smile, every hug of a disabled person, every exhortation to mercy, will be stained for the rest of history by this unprecedented and absolutely gratuitous act of pastoral cruelty, the attempted revocation of Summorum Pontificum.”

Meanwhile, some Catholics expressed alarm at the tone of the motu proprio’s critics.

“Seeing a lot of so-called ‘faithful Catholics’ complaining that ‘Bergoglio’ has killed the Church. You’re part of the problem and the reason some bishops are so concerned,” Fr. Luke Wilkinson wrote on Twitter.

“Pray and respectfully request your bishop to be generous. Conspiratorial calumny is the last thing we need.”