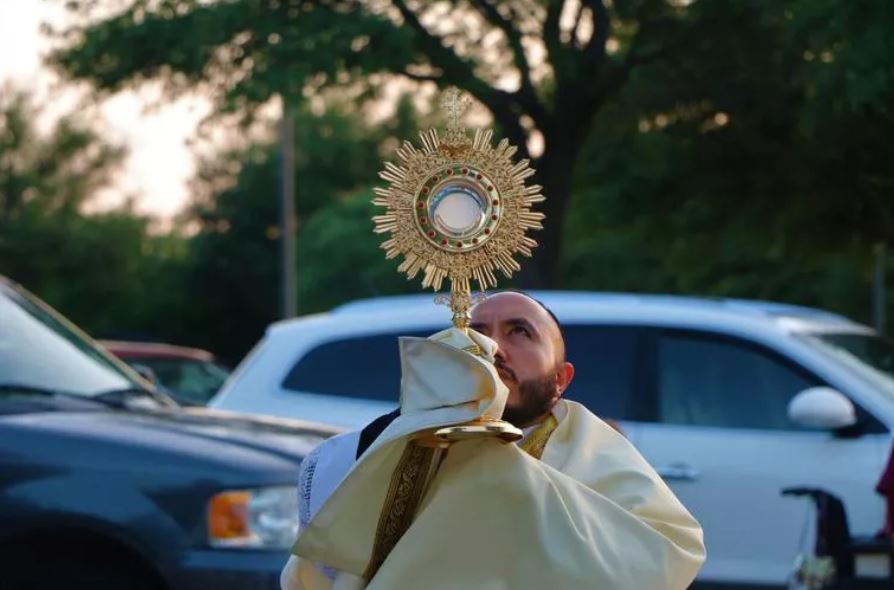 Sunday, June 6, is the Solemnity of the Most Holy Body and Blood of Christ (Corpus Christi).

Happy Corpus Christi Sunday! This feast day is the last of the great “trifecta” of late spring solemnities: Pentecost, Trinity and Corpus Christi. Through these feasts, the Church reminds us of foundational truths of our faith before we return to Ordinary Time.

Corpus Christi began in Liege, Belgium, where Eucharistic devotion flourished among women religious in the 1200s. At the urging of one of these women, Juliana of Liege (1192-1258), the local bishop established a feast of the Body and Blood on Thursday after Trinity Sunday, to provide an opportunity outside of Lent to celebrate the Eucharist in a festive way. When the archdeacon of Liege became Pope Urban IV in 1264, he immediately made it a feast for the universal Church. Observed on the following Sunday in the U.S., this feast’s most distinctive celebration is the Eucharistic procession.

The Mass readings give us a brief biblical theology of the Eucharist. In Exodus 24:1-8, Moses solemnizes the covenant between God and Israel at Sinai by sacrificing animals and sprinkling the blood on both people and altar, saying, “This is the blood of the covenant that the Lord has made with you.” The blood symbolized both kinship and curse: kinship, because God and Israel now shared “one blood” — they were a family, because covenants are a means of family formation; curse, because if either Israel or God were to break the covenant, they would fall under a curse of death symbolized by the shed blood of the animals. Later, Israel would break the covenant (Exodus 32), but God would not execute upon them the curse of death. That curse was kept in forbearance until Jesus, Israel’s sacred king, could bear it on behalf of his people.

Psalm 116 is a famous thanksgiving (in Hebrew, todah) psalm that was part of a set of Psalms (113-118) chanted near the end of the Passover ceremony. Psalm 116 asks, “How shall I make a return to the Lord for all the good he has done for me?” and answers, “I will take up the cup of salvation.” When ancient Israelites were thankful for some blessing from God, they would literally go up to the temple, offer an animal, and pour out a cup of wine on the sacrifice as a libation or drink offering. In that cup, we see the prototype of the Eucharistic cup that we offer in thanksgiving for our salvation in Christ.

Our second reading from Hebrews emphasizes the superiority of Jesus’ New Covenant over the Old Covenant made by Moses. Moses used animal blood, which can only be a symbol; but Jesus offered “his own blood,” the blood of the God-man, and this blood is truly effective as an offering for the forgiveness of human sin.

Our Gospel is Mark’s account of the Institution of the Eucharist. Taking up the cup, Jesus says “This is my blood of the covenant.” His words are almost identical to those of Moses, except for one little word: my. “This is my blood,” Jesus says — in other words, not just the blood of animals and not just a symbol. “Which will be shed for Many,” he says. In the Dead Sea Scrolls, “the Many” (Hebrew, ha-rab) is a term to describe the community prayerfully awaiting the coming of the Messiah: In other words, it is a synonym for “Church” (Hebrew, qahal). Mark continues, “after singing a hymn” — this would have been Psalms 113-118, including our Responsorial above — “they went out to the Mount of Olives,” and the Passion began.

The truth of the Eucharist provokes a “Passion,” an outburst of ridicule and persecution from the world, but this is a day for Catholics to ignore the world’s scorn and joyfully say:

Pope Francis Believed to be Prepar...

Countdown to beatification of mart...