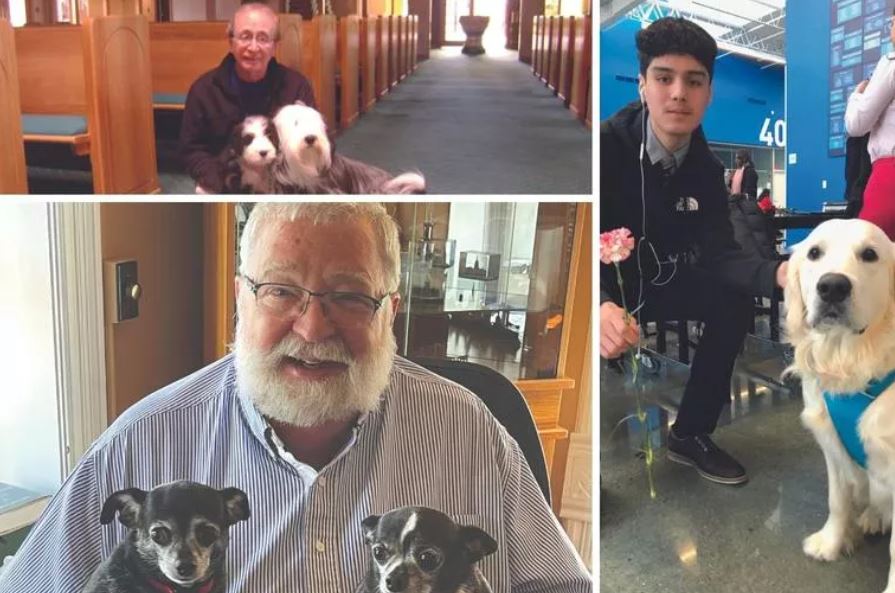 As Father John Paul Echert began experiencing symptoms of COVID-19 recently, his beagle, Charlie, recognized something was wrong and responded.

“Even now, with my COVID, my dog is really sensitive,” said the pastor of Holy Trinity parish, consisting of Holy Trinity and St. Augustine Churches in South St. Paul, Minnesota, who was hospitalized with the illness in early September but has since recovered. “As I was showing signs of sickness, he was always there in the bed with me, right beside me all the time.”

Three-year-old Charlie is one of many pets who, as sensitive companions, bring life and joy to clergy and school and parish communities. As we celebrate the feast day of creation-loving St. Francis of Assisi, this article looks at dogs who not only delight their owners but have their own ministries of support as beloved members of the parishes and schools they frequently visit.

“Anybody who has a dog or other pet knows that these are gifts from God, to be enjoyed, and there’s something about dogs in particular — that they’re just always your friend, no matter what,” said Father Echert, who has had two beagles in his 16 years at his parish.

In his nine years in Butte, Montana, Father Patrick Beretta has had much larger dogs keep him company. The pastor of Butte Catholic Community North, consisting of Immaculate Conception and St. Patrick parishes, currently owns two mastiffs, Tristan and Ysolt, who each weigh close to 200 pounds. He said they offer serenity as he deals with stress and sometimes sadness in ministering to the suffering.

“They’re gentle giants, so there’s something very touching about the contrast between the immense strength of the dog and also the gentleness of the dog,” Father Beretta said. “They bring an enormous amount of peace to me.”

A bad day can become a good one when Bishop Daniel Jenky, of the Congregation of Holy Cross, of Peoria, Illinois, spends time with his 10-year-old chihuahuas, Monsignor and Vicar. “They love me, and they don’t worry at all with what is worrying me at any given time,” he said. “I think they have helped me to maintain my sanity during rough days.”

The two Bernese Mountain therapy dogs at Cristo Rey St. Martin College Prep in Waukegan, Illinois, weigh close to 100 pounds each, but they are not threatening to the school’s roughly 400 students, who love spending time with them, said the school’s president, Preston Kendall.

Trained as certified comfort dogs, Junebug, 5, and Birdie, 2 1/2, spend time each week at the school and at the federal courts in Chicago, where Kendall’s wife, Virginia Kendall, is a U.S. district-court judge. At court, the calm and gentle dogs sit with witnesses and jurors, while at the school they are present with students, sometimes even at counseling sessions. They can sense who needs extra attention, said President Kendall, adding they draw close to students who are facing more stress.

“If dogs have emotional intelligence, theirs is super high, because they can read people,” he said. “They know when people are stressed. They’ll come over and sit down. … I have had people say they’re going through a hard time and all of a sudden Junebug will actually pick them out of a crowd and sit with them.”

Cristo Rey also has a third service dog, a golden retriever named Bodi, owned by a couple on staff.

“The dogs love their work,” Kendall said. “As soon as I say ‘school,’ they’re running to the car,” he said. “They are ready to go. I think it’s just innate in them that they want to be of use, and being with our students and letting students pet them is their job.”

Father William Krizner’s bearded collies, Grace and Annie, also have their own ministry of presence at St. Colette parish in Brunswick, Ohio, where the gentle, people-loving dogs spend much of their time. With temperament and personality similar to sheepdogs, the dogs are “big, fluffy stuffed animals that move around,” the priest said.

“For the people in our parish, they’re like comfort dogs,” said Father Krizner, who in his 14 years as pastor has always had at least one bearded collie and also has a pet rabbit. “I couldn’t possibly have trained them to do that. They did it by their own instinct. They’re a gentle breed, but I think they’ve got a sense about them, too.”

Besides being great companions at home, the dogs spend the day at the parish offices where the staff dotes on them, he said. Parishioners consider them parish dogs, Father Krizner added. “The fact is the dogs feel this is their parish, too; this is their place; this is their home.”

Another parish dog with a great following doesn’t actually exist. Father Leonard Andrie has wanted to get a golden retriever, but his busy schedule doesn’t allow it right now. After becoming pastor of St. Therese in Deephaven, Minnesota, Father Andrie created a parish mascot dog named “Goldie” and each week runs a picture of a golden retriever to illustrate his bulletin message. “For some reason people absolutely love this make-believe dog, and he is always doing something fortuitous,” he said. “He kind of embodies the point or the virtue … so they can see a picture of the point we’re trying to make. Many people who get the bulletin at home say they always go to the picture first. They can’t wait to see what he’s ‘doing’ each week.”

“Goldie” is missed when he’s not in the bulletin, said Father Andrie, adding that his childhood golden retriever, who was loyal, joyful and easy to be with, provides inspiration for the imaginary mascot who honors the legacy of St. Francis. St. Therese parish holds a pet blessing around St. Francis’ feast day.

Staff and parishioners see Charlie the beagle at the parish each day, reports Father Echert. He always wins the annual school marathon, a fundraiser involving sponsorship for a one-mile walk between the parish’s two churches. “Every year I put puppy pledge envelopes in the pews for people to be able to pledge my puppies for the school marathon,” he said. “They always raise a big chunk of money for the school, and the kids love it. Charlie loves it.”

“I think kids take a lot of pride in the fact that their school has therapy dogs. They love them.”

At parishes and schools, volunteers step up to care for the dogs during the day. Before COVID, Cristo Rey students signed up to take the dogs out, and at St. Colette, the dogs are brushed and walked regularly. Bishop Jenky said his chihuahuas seem to love the Franciscan sisters who care for him and them. Until recently, the bishop said he frequently brought his dogs to his office. Bishop Jenky said he has invoked St. Francis’ protection for his pets when they were injured or ate something they shouldn’t, and he sometimes takes his dogs to a nearby parish to be blessed around the saint’s feast day. St. Francis loved and reverenced animals for many reasons, he said. “But one of the most important was that he affirmed the goodness of God’s creation against the medieval hearsay that condemned God’s natural creation.”

St. Francis’ gentleness and love of animals and creation are inspirations, said Father Beretta, who doesn’t hold a pet blessing because a neighboring parish does. St. Francis “continues to have a redeeming influence on our world and on our Church.”

Dogs bring a particular grace to people, Father Krizner said. “I think that they are in many cases touched by God with a touch that they can pass on to others.” Father Krizner enjoys blessing pets at the parish for St. Francis’ feast day.

Some humans should be a little more forgiving and eager to see each other, as dogs are, Father Echert said. “If we were always that way to each other, it would go a long way, wouldn’t it?”

St. Francis believed in God’s presence in all creation, and dogs remind us of that, Kendall said.

“They’re creatures; we’re creatures — we’re all created by God,” he said. “There’s definitely a presence when the dogs are around. It’s a reminder to all of us that God’s working in our lives on a daily basis.”

Lessons From the Head of the Holy...