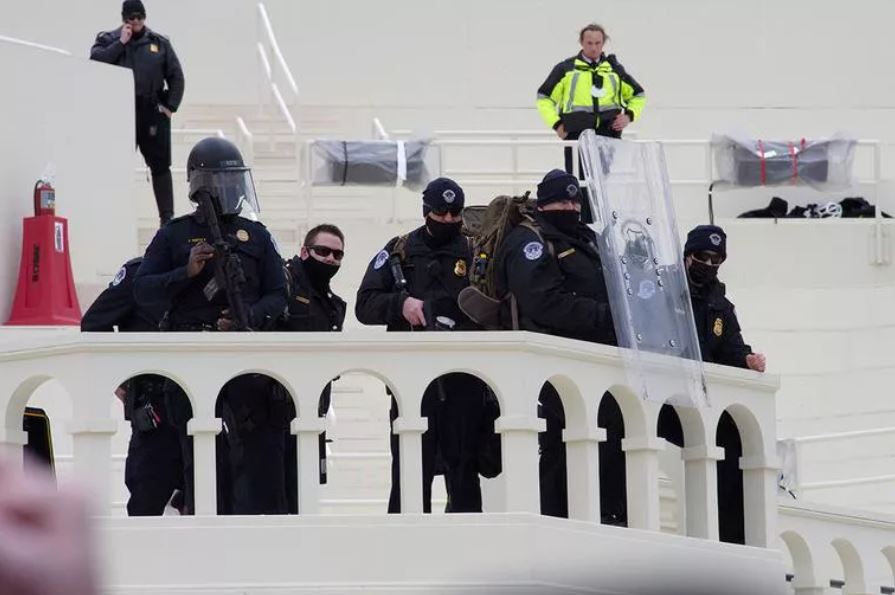 The storming of the Capitol was met by widespread responses of condemnation, even from many who once supported Trump.

The chaotic scene unfolding in Washington, D.C. today, with a pro-Trump mob breaching the Capitol building and halting the vote on the ratification of the 2020 election, stunned the nation, stirring an outcry from religious and political leaders.

Archbishop José Gomez of Los Angeles, president of the U.S. Conference of Catholic Bishops, in a statement released this evening, joined the countless voices “condemning the violence today at the United States Capitol”

“This is not who we are as Americans,” said Archbishop Gomez, calling for prayers for “members of Congress and Capitol staff and for the police and all those working to restore order and public safety.”

Capitol police confirmed that a woman who had been shot inside the Capitol as protestors surged inside has since died.

In a speech to the nation, President-elect Joe Biden rebuked President Donald Trump and the protestors who took part in the riot at the Capitol, vandalizing the building.

“Our democracy is under unprecedented assault unlike anything we’ve seen in modern times,” Biden said, describing today’s action as “an assault on the rule of law.”

Cardinal Wilton Gregory, archbishop of Washington D.C., called for an end to the “divisive tone that has recently so dominated our national conversations.” And without naming President Trump he called out those who could have instigated the day’s chaotic events, saying, “Those who resort to inflammatory rhetoric must accept some responsibility for inciting the increasing violence in our nation.”

The stunning events at the Capitol capped three days of national events in the tumultuous aftermath of the November election.

On Sunday, members of the 117th Congress were sworn in. Then came Georgia’s high-stakes Senate runoff on Tuesday, which resulted in a double victory for Democrats who now control all three branches of government.

Today’s debate and vote count was expected to spark tensions within the GOP, as Trump pressed party members to back his belief that the 2020 election was “stolen” from him through widespread voter fraud and more than 150 Republican members of Congress vowed to debate the certification.

This morning pro-Trump protestors had massed outside the Capitol as Congress gathered for the joint session to certify Joe Biden’s election victory.

The president had spoken earlier with his supporters at the Ellipse, where he promised he would not “concede” the election.

“All of us here today do not want to see our election victory stolen by emboldened radical Democrats,” Trump said. “We will never give up. We will never concede. It will never happen. You don’t concede when there’s theft involved. Our country has had enough. We will not take it anymore.”

The president continued his call for Vice President Pence and other GOP lawmakers to halt the ratification process.

He also encouraged his supporters to proceed to the Capitol, to “give our Republicans,” Trump said, “the kind of pride and boldness that they need to take back our country.”

As Congress prepared for the certification, Pence presented a formal letter that outlined his understanding that as vice president he could not “reject electoral votes unilaterally.”

“If this election were overturned by mere allegations from the losing side, our democracy would enter a death spiral. We’d never see the whole nation accept an election again,” said McConnell before his fellow lawmakers.

“We cannot keep drifting apart into two separate tribes, with a separate set of facts and separate realities, with nothing in common except our hostility toward each other and a few national institutions we all share.”

“There can be no double standard. The media that is outraged today spent four years aiding and abetting Democrats’ attacks on our institutions after they lost. But we must not imitate and escalate what we repudiate. Our duty is to govern for the public good.”

Outside, Trump supporters confronted police in riot gear and skirmishes broke out. Officers fired pepper spray to move the crowd back. Then protestors breached the Capitol and moved into the building suspending the electoral college vote count as the building was put on lockdown.

Pence, reconvening the vote counting process this evening, said that the nation grieved “the loss of life in these hallowed halls as well as the injuries suffered by those who defended our Capitol today.”

“To those who wreaked havoc in our Capitol today, you did not win,” he said. “Violence never wins. Freedom wins. And this is still the people’s house.”

The storming of the Capitol was met by widespread responses of condemnation, even from many who once supported Trump.

Wall Street Journal executive Washington editor Gerald Seib summed up the day: “President Trump’s term, which began with Republicans fully in charge of Washington and the promise of a new kind of populist leadership, effectively came to an end Wednesday with his party aflame and out of power, some of its top leaders excoriated by a president they had loyally supported, and a mob of Trump supporters occupying and vandalizing the Capitol.”