Children’s book helps Catholics in Scotland consecrate themselves to Mary 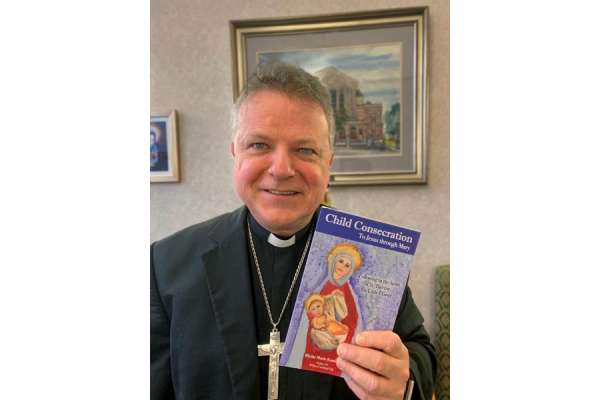 Children’s book helps Catholics in Scotland consecrate themselves to Mary

Paisley, Scotland, Feb 22, 2021 / 05:19 pm (CNA).- A Scottish bishop has encouraged families and individuals to join him in a consecration to Mary by a less conventional means – a children’s book.

“Child Consecration: To Jesus through Mary – Following in the Spirit of St. Thérèse, the Little Flower” is a 33-day consecration, which slowly introduces more prayer through the month until the last nine days, when a rosary is prayed daily.

“This Consecration has been one of the loveliest things of my priesthood. There is something of Heaven about this Consecration and I pray many individuals and families may consider taking up this book. I also humbly invite Shepherds to consider leading their flock in this Consecration. A great harvest lies ahead,” said Bishop John Keenan of Paisley.

The book takes parts of Consecration to Mary by St. Louis de Montfort and focuses on the spiritual identity of St. Therese, namely her trust and confidence in God. Bishop Keenan says the book is valuable for all ages.

“I could see that, although written for children, the book was just as well suited for priests and adults,” he said.

“Everything is founded on a story of a child guided by her mother to tend her father’s garden, a story that engages the imagination and senses,” Keenan says. “Through this allegory both adults and children are able to engage in a Consecration that is every bit as rich as the Consecration outlined by St. Louis de Montfort. The book effortlessly seems to help souls scale to great spiritual heights.”

The bishop has prayed the consecration at 9 p.m. every night, which has been broadcast on his Facebook page. He encouraged the diocese’s laity and clergy to pick up the book and begin the consecration with him.

About 500 people on average join the bishop for the live prayers, and the total viewership per day is approximately 4,000. The live prayer sessions also see people join from other countries around the world.

“The response from my own diocese was large and steady,” he said.

“I thought many might drop out after a week, but people remained committed until the end. In addition to many joining me locally, we had participants from the United States, Nigeria, Ireland, Poland, Kenya, Uganda, Canada, Sweden, Ethiopia, and Australia joining in. We became a tight family and, as the Consecration drew to a close, many shared their disappointment that the evenings of prayer would end.”

He said the consecration has already been a source of grace and spiritual nourishment for the community.

“I could see my flock growing stronger in prayer and when individuals shared their hope that I would continue to pray with them, I saw this as a great opportunity to continue some weeks or months with a nightly Rosary,” the bishop said.

“In this way the progress these souls had made in faith and prayer could be reinforced and made sturdy. It gives me great joy to see children, families and those alone finding consolation in meeting Jesus through this Consecration and also developing a relationship with the great Mother of God.”

Devotion to St. Joseph in the Eter...