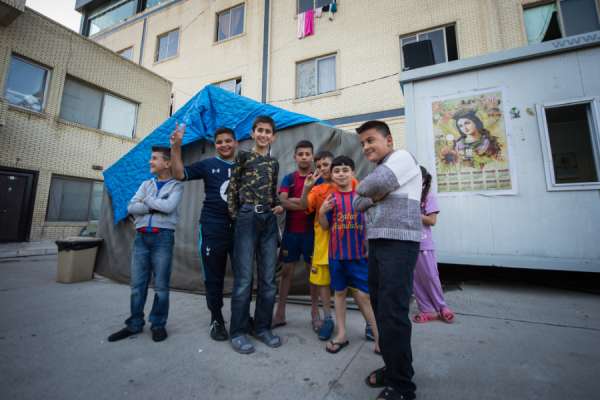 Davide Bernocchi, Catholic Relief Services’ country representative for Iraq, said: “People are really hopeful and grateful for this visit. This country has been at the center of attention for bad news for so many years unfortunately, and now they are really happy to be the center of the world’s attention for a few days because of this great and positive event.”

“It’s really not just the Christians; it is the whole of the Iraqi people who are waiting for this visit … My sense is that — with the exception of the small remnants of ISIS — everyone else is really happy about this visit.”

Large banners depicting Pope Francis alongside Ali al-Sistani, an influential Shiite cleric in Iraq, have been hung in Najaf, one of the most sacred pilgrimage sites in Shiite Islam, after only Mecca and Medina.

A hashtag in Arabic relating to the pope’s trip was trending on social media sites in Iraq on March 3. Using the hashtag أطلب_من_البابا# (meaning “Ask the pope”), Iraqis commented on their government’s campaign to beautify the streets of cities that the pope will be visiting and called for improvements to infrastructure and public services.

“I ask the pope to travel by car along the main highway north. Maybe they’ll pave that too,” Hussein Habib wrote, according to an AFP report.

“As faith-based organizations, we fully embrace this message of fraternity and dialogue that Pope Francis is bringing to Iraq,” the aid organizations’ letter said.

“We firmly believe it represents a necessary way forward to heal past wounds and build a future for the country’s diverse communities. We work in collaboration with the national and local authorities to help communities reconcile, rebuild peace, and reclaim their collective rights to safety, services, and livelihoods.”

“Regardless of their religion, people must be for people. They must support and stand up for others. The pope’s visit underlines this message for Iraqi communities,” Amer said.

In their joint statement, the 29 aid groups highlighted the significant challenges facing Iraq, including the dire need of the country’s 1.2 million internally displaced persons and 4.8 million returnees.

“Iraq is the cradle of human civilization and a beautiful country of rich cultural and religious diversity. For centuries, many ethnic and faith communities lived side by side in this land,” the organizations wrote in their statement.

“However, in recent decades Iraq has suffered from war, insecurity and instability and, most recently, from the rise of ISIS. Such a sequence of conflicts has deeply strained relations between communities and damaged the country’s social fabric.”

“Meanwhile, a worsening economic crisis, exacerbated by the COVID-19 pandemic, is pushing many into poverty and depriving the government of resources needed to assist its own people,” it added.

One way that Catholic Relief Services has been working to help rebuild devastated communities is through the Shared Future program, funded by USAID, which brings together youth from different religions to work together in rebuilding projects.

“I think it is a very interesting project because basically what we do is, in coordination with local religious leaders from different religions, we put together youth and let them analyze the common problems and come up with solutions and then we support the implementation of those solutions financially, technically, etc,” Bernocchi said.

“And so these are joint initiatives that are really useful to reconnect people from different communities, because you know the problem is that ISIS had this hellish project to destroy diversity — and diversity is the social fabric of this country.”

The unemployment rate for young people in Iraq is estimated to be 36%, according to a report published by the Atlantic Council in February.

About 60% of Iraqi’s population is under the age of 25. According to the report, “many of these young Iraqis are unemployed, or at least under-engaged, meaning that they are often impoverished, bored, and resentful. Many have been traumatized by nearly constant warfare.”

The report said: “Years of conflict have significantly diminished educational opportunities, making many Iraqis unemployable even in trades, due to their lack of skills. There are likely not enough skilled Iraqis to take on technical jobs, should the need for these jobs increase.”

Aid to the Church in Need announced on March 3 that it would be funding 1.5 million euros (around $1.8 million) worth of university scholarships for 150 students at the Catholic University in Erbil, which has students who are Christian, Muslim, and Yazidi.

Welcoming the scholarships, Archbishop Bashar Warda of Erbil said: “We need to bring good news to the people here during the papal visit; to be able to announce the vision to have 1,000 students by 2025, giving us a significant voice and a clear future for our young people and their parents, brings great hope.”