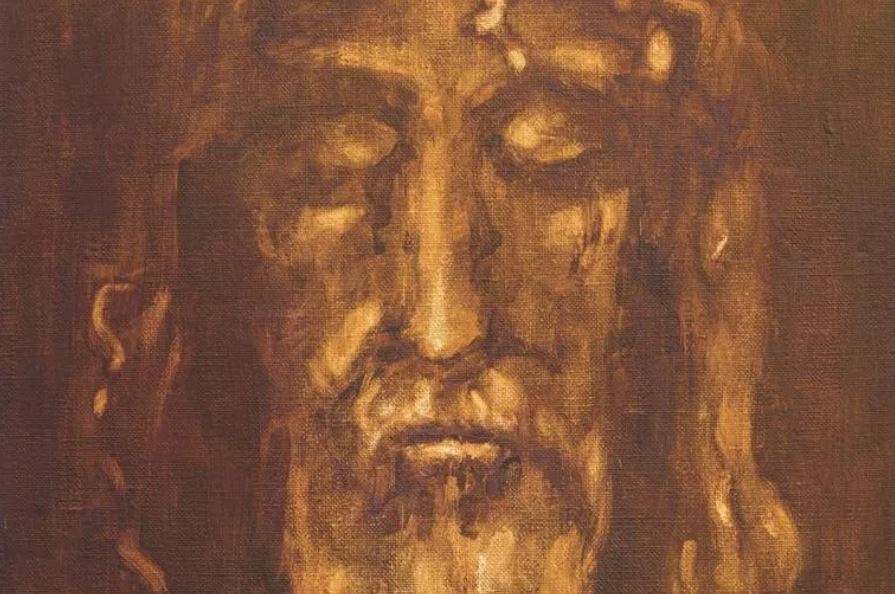 Archbishop of Turin Cesare Nosiglia has announced that the Shroud of Turin, believed by many to be the burial cloth of Christ, will be displayed virtually for veneration. The archbishop will also preside over a livestreamed Holy Saturday liturgy.

Perhaps no religious icon is as hotly debated as the Shroud of Turin. Believed by some to be a miraculous imprint of the body of Jesus Christ on his burial cloth just after his crucifixion, the shroud is condemned by others as a religious hoax, painted by skillful artists in the 14th century. Though the Shroud of Turin is not officially recognized as a relic by the Catholic Church, it nonetheless inspires veneration by the faithful worldwide.

The faint yellow image on the Shroud of Turin shows the front and back of the body of a man who died by crucifixion. But no one knows for certain how the image actually arrived on the linen. The image is a near-perfect negative and is anatomically detailed far beyond the skill of any artist before the late Middle Ages. With the exception of the 1988 radiocarbon-dating tests, most scientific research indicates that the imprint could indeed be the image of Jesus Christ. If we do accept that the shroud bears this miraculous imprint, this image can tell us a great deal about Christ’s suffering and death.

Based on the shroud, Jesus of Nazareth was a physically commanding person, standing nearly 6 feet tall and weighing 175 to 180 pounds — a large man for that time in history. He had very broad shoulders and well-defined, muscular arms and legs. He had a majestic face and thick, well-groomed hair. Ethnologists have found the features of the man (long hair, beard, unbraided pigtail) to be consistent with those of a Sephardic Jew living in Roman-occupied territory. His age at death is estimated to be between 30 and 45 years old.

What the shroud tells us of Christ’s death is that he endured the worst form of torture of which evil minds could conceive. His death was extremely brutal. His right eye is swollen almost shut, his nose is deviated, both eyebrows are swollen, and there are several other lacerations on his cheeks, all as a result of a severe beating. His chest, shoulders, back, buttocks and legs are covered with dumbbell-shaped cuts or scourge marks.

A Roman scourge consisted of a leather thong with a pair of lead balls or round bones at the end. The scourging was meant to be painful but not fatal. The balls ripped out bits of flesh, causing deep contusions and substantial blood loss. The configuration of the scourge marks — 120 in all — indicate that he was whipped by two men while bound naked to a post with his hands tied over his head.

Contrary to popular belief, those condemned to die did not carry the entire cross to their crucifixion. The upright part of the cross, or the stipes, was a permanent fixture outside the city gates. The condemned were forced to carry the crossbeam, or patibulum, estimated to have weighed 75 to 125 pounds, balanced along the back of their shoulders and strapped to their outstretched arms. The image of the man’s back shows two large friction marks, one just above the right shoulder, one further down the left side, caused by the heavy friction of the beam across his back. His knees show severe swelling and scraping, caused by repeated falls while carrying the crossbeam. The scourging had weakened Jesus so much that Simon of Cyrene was eventually compelled to carry the cross for him.

The blood flows coming from his scalp indicate that the Crown of Thorns was not the dainty halo so often portrayed in religious art. It was, in fact, more of a cap, covering his entire scalp and beaten into his head with a reed.

The shroud indicates that his right leg lay against the vertical beam, the left foot slanted inward and placed over the right. A single spike, approximately 11 inches long, was driven at a diagonal through the heels of both feet, in order to support the weight of the body. A large blood stain near the feet has been shown to be a post-mortem flow, occurring when the spike was removed.

Crucifixion victims were not nailed through the palms where the flesh would have quickly torn. Instead, the spikes were driven through the folds of the wrist. By displacing the two bone structures, the nails could then support the weight of the upper body. His thumbs aren’t visible on the shroud because the nail also severed the median nerve, resulting in the thumb immediately folding, painfully paralyzed, into the palms of his hands.

A body on a cross assumed two positions: In the relaxed position, the weight is supported by the wrists, the legs bent, and the upper body slumped forward. This caused the shoulder blades to close in, making exhalation difficult. In order to resume breathing, the victim would force himself up, shifting his weight to the nails driven through his heels and causing the bones in his wrists to rotate around the spikes. The searing pain of this position would make it nearly impossible to maintain.

The flow of blood on his forearms, as evident in the shroud, moves in a jagged path toward his shoulders, indicating that he struggled mightily against death, raising himself up on his feet many times to keep breathing. Romans often practiced crurifragium on crucifixion victims — breaking their lower legs, thereby hastening their deaths by preventing them from pushing their bodies up to breathe.

According to the Gospel of John, the Jews wanted to prepare for the Sabbath, so they asked permission of Pilate to break the legs of the crucified. Jesus’ legs were not broken since he was already dead when they arrived. Jesus died of asphyxiation, and, in death, his pectoral muscles are contracted, the pit of the stomach is sunk inward, and the lower abdomen is pressed forward.

Another distinctive feature of the shroud is the large blood stain on the side of the chest. According to the Gospel of John, when the soldiers came to break his legs, “One of the soldiers thrust a lance into his side, and immediately blood and water flowed out” (John 19:34). There are different theories for the “water” that emanated from his body, but most pathologists agree that the fluid emanated from a post-mortem piercing of the heart through the fifth and sixth rib. The clear fluid can be clearly seen on the shroud in x-ray photographs.

After Jesus died, the wealthy Joseph of Arimathea retrieved the body: “He took it down, wrapped it in fine linen, and laid it in a tomb” (Luke 23:52). The makeup of the fabric, a herringbone twill weave, was a costly manufacture for the time. The Scriptures do not mention the preservation of any burial cloth, perhaps because there was not time for proper burial. The Sabbath was quickly approaching; and, as observant Jews, the disciples were possibly distressed by the fact that his body could not be properly cleaned and anointed with oils and spices before it was entombed.

Perhaps the biggest mystery of the shroud is what happened to the body inside of it. There are no signs of physical decomposition of Jesus’ body in the image. The image then exists as a sort of “snapshot” of a corpse that was removed within 72 hours of burial. This, along with many other factors, indicates it was the shroud of Jesus Christ. The unbroken legs, the crown of thorns, the side wound and the heavy scourging are historically uncommon. Still, our faith in the crucifixion and resurrection of Jesus Christ does not depend on the authenticity of the Shroud of Turin. Instead, the shroud gives us a clear look at the way Jesus died for us — a torturous, evil method, full of unspeakable pain and suffering. It cannot but humble us.