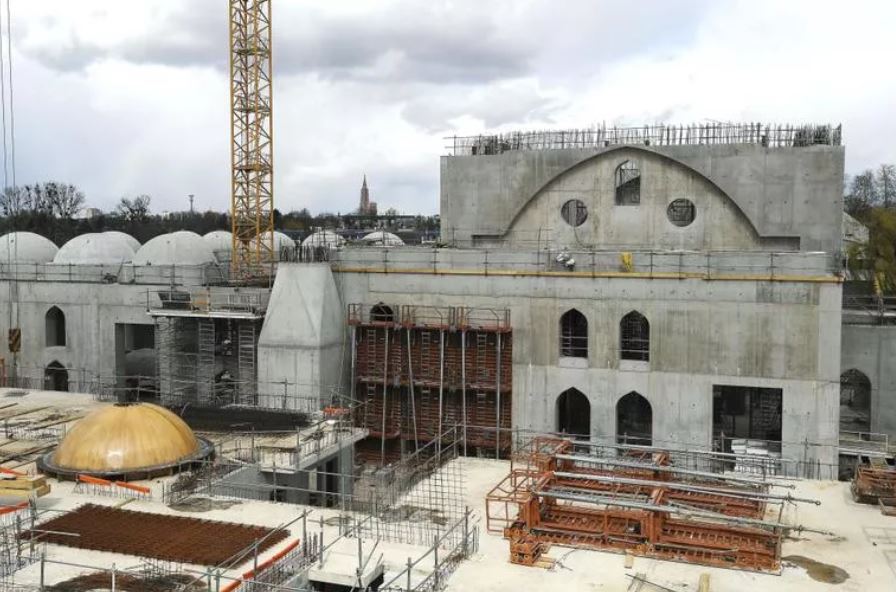 This general view taken on April 6, 2021, shows the construction site of The Eyyub Sultan Mosque in Strasbourg, eastern France, after the city council of Strasbourg approved in principle at least 2,5 million euros in public funding for the construction led by the Milli Gorus (CIMG) association. (photo: FREDERICK FLORIN / AFP/Getty)

The project, undertaken by the radical Muslim organization Millî Gorüs in the French city of Strasbourg, headquarters of the Council of Europe, has generated concern up to the highest spheres of French politics.

PARIS — A national scandal erupted in France after the municipal council of Strasbourg (located in the northeastern region of Alsace) voted March 22 to grant 2.5-million euros in funding to the construction of a mosque led by Islamist movement Millî Görüş.

By virtue of the 1918 Concordat, the Alsace-Moselle region is not subjected to the French law on the separation churches and the state and therefore can help finance the construction of up to 10% of the total cost of places of worship. In 1999, the city of Strasbourg extended this legal provision to mosques (prior to this, the Concordat used to apply only to Catholic, Lutheran and Reformed Churches, as well as the Jewish religion).

It is on that basis that funding was requested by the Turkish political-religious organization for its Mosque Eyyub Sultan, a construction project initiated in 2017 that aims to become the largest mosque of Europe — its total area would be over 75,000 square feet, with minarets 118 feet high — at a total projected cost of 32 million euros (around $38 million).

This decision of Strasbourg Mayor Jeanne Barseghian, a member of the left-wing party Europe Ecology-The Greens, triggered strong reactions among the political class up to the highest echelons of French government. In particular, Minister of the Interior Gérald Darmanin accused the municipality of “funding a foreign interference on the [French] soil.”

Consequently, the government introduced a special “Strasbourg Amendment” to the bill on separatism that the Senate adopted April 8, stipulating that a mayor cannot facilitate the construction of a place of worship without informing the department’s prefect at least three months beforehand.

The controversy was all the more divisive because the mosque’s location and size has a strong symbolic dimension. Indeed, the city of Strasbourg, headquarters of the Council of Europe and one of the three “capitals of Europe” with Brussels and Luxembourg, also houses the emblematic medieval Cathedral of Our Lady of Strasbourg, one of the world’s tallest churches. The Ottoman architecture of the mosque, with its imposing minarets, would leave a lasting mark on the landscape of this high place of Christian Western culture.

Given the magnitude of the public outcry, the Muslim organization announced the withdrawal of its grant application in an April 15 letter to the mayor of Strasbourg, as she disclosed in an April 16 press conference, citing “the need to consolidate their financing plan” as the structural work of the mosque is about to be completed.

For Jean-Philippe Vetter, the president of the opposition group at Strasbourg’s municipal council of who filed a court appeal against the planned subsidy at the beginning of April, the main problem at the basis of this building project is the lack of transparency and safeguards.

“We do not know where the millions of euros that finance this mosque come from, we know that the association carrying the project is closely linked to Turkish politics and we know that they refused to sign a charter guaranteeing republican principles such as equality between women and men or the fight against Salafism,” a branch of Sunni Islam that promotes sharia (Islamic law), Vetter told the Register.

“We cannot allow everything with public money. It would be worrying if French communities financed projects without any guarantee of respect for the fundamental principles of the Republic.”

Vetter, member of the conservative party Les Républicains, also highlighted the close and well-known bonds between the Islamic Confederation of Millî Gorus and the Turkish political world. In fact, Turkish Deputy Prime Minister Bekir Bozdağ attended the first stone-laying ceremony of the Strasbourg mosque, in 2017.

Moreover, Millî Gorus was founded in 1969 in Germany by former Turkish Prime Minister Necmettin Erbakan, to unify the Turkish diaspora in Europe.

Considered Turkish President Recep Tayyip Erdoğan’s political mentor, Erbakan once stated, during a 1991 speech in Ludwigsburg, Germany, that “the Europeans are sick. … We will give them the medicine. The whole of Europe will become Islamic. We will conquer Rome.”

The confederation claims to have now 600 mosques throughout Europe and around 150,000 members. It operates 70 places of worship in France.

Contacted by the Register to discuss the accusations against them and the future of their mosque under construction, the members of Millî Gorus didn’t respond by the time of publication.

In an April 6 press conference, however, they vigorously denied the allegation of close alignment between their association and Ankara, claiming that they were “independent” of Turkey and had “no political project nor agenda.”

Erdoğan’s Will for Hegemony

Yet, several observers from different political perspectives have expressed their conviction that this massive building project bears the mark of Erdoğan’s political expansionist objectives in Europe.

In an interview with the daily newspaper Le Figaro, historian and Orthodox theologian Jean-François Colosimo recalled that along with the massive Eyyub Sultan project, Erdoğan’s will for hegemony in Europe within the  framework of his “neo-Ottoman project” was also expressed through his recent proposal to the European Commission to create a huge Koranic education center in Strasbourg, which would entirely manage Islam in Europe following the Turkish model.

This viewpoint is shared by Joachim Veliocas, an analyst at the Centre des Etudes du Moyen-Orient in Paris, who says the construction of the mosque is part of the “emergence of a Turkish counter-society in Strasbourg.”

Veliocas, a former analyst in geopolitical risk for the consulting firm Wikistrat in Washington, D.C., and founder of L’Observatoire de l’islamisation, said this counter-society is supported by the existence of a grade school and a high school, a university campus in the making and a media outlet, as well as an associative network and sports clubs.

But the emergence of such “societies within the society” is made possible only by the permissiveness of local authorities, according to Veliocas, who has written a book about the widely spread cronyism practiced by politicians from all parties to buy votes by distributing public funds, a practice that facilitates the rooting of radical Muslim associations in France.

The Strasbourg case is, in his view, a perfect example of this “electoralist logic” undertaken by Europe Ecology-The Greens and other political parties.

“They do everything in their power to placate Muslims,” said Veliocas, “even the most radical Muslims, in order to consolidate this electorate, often by raising the non-discrimination argument,” which consists in granting Islam the same space as Christianity in the French nation’s landscape.

But added to this vote-catching cynicism is often a lack of knowledge on the part of political leaders about the real ideological foundations of Islamist groups. Such ignorance, he believes, sometimes even extends to Catholic leaders.

“Sometimes, we see some bishops at the inaugurations of mosques connected to the Muslim Brotherhood,” said Veliocas, who recently published the book L’Eglise face à l’Islam. Entre naïveté et lucidité (“The Church in the face of Islam: Between Naivety and Lucidity,” prefaced by Father Henri Boulad).

“Cardinal Barbarin, for instance, once published a press release in defense of the Institute of Muslim Civilization of Lyon, subsidized by the municipality,” he said. “Yet, we know that it is led by supporters of Tariq Ramadan [grandson of the founder of the Muslim Brotherhood] and was inaugurated by the general secretary of the Muslim World League, Muhammad Al-Issa, who prescribed in his doctorate thesis offensive jihad and the assassination of apostates!”

Veliocas concluded by saying that the question of the rise in radical Islam in France and the rest of Europe is not going to sort itself out unless the various authorities, including Catholic bishops, “address it properly, with less naiveté.”