Darwin, Marx, Freud and the Diminishment of Humanity 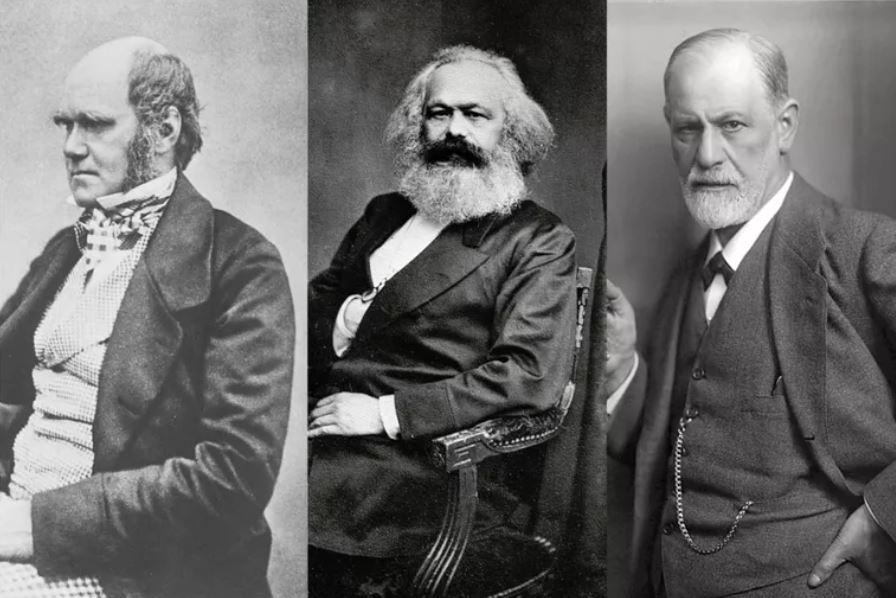 Darwin, Marx, Freud and the Diminishment of Humanity

COMMENTARY: The first business in improving relations between the races is to improve the broader notion of the human race.

Until the dawn of modern science in the 17th century, it was the consensus among earthlings that their planet was located at the center of the universe. It seemed appropriate for man, considering his God-given dignity, to be enthroned at this honored position.

The scientific contributions of Copernicus, Galileo, Newton and others, however, made it painfully clear that the earth, on which man spends his days, was just another planet revolving around the sun and, indeed, not the center of the universe. Man’s spot in the solar system was no more dignified than that of Mars, Venus, Saturn and Jupiter. His pride was scorched. It was a rude shock to the many who interpreted this diminishment as incompatible with the grandeur of the human being. But the real diminishment of man was yet to come.

Charles Darwin (1809-1882) removed a providential God from the picture of creation and replaced him with chance. Human beings, along with all the other animals in the animal kingdom, developed as a result of numerous chance occurrences within their environment. Evolution, according to Darwin, accounted for the appearance of man on nature’s stage. Man was not so much a spiritual being, but a mass of protoplasm, though highly evolved, that bore an historical kinship with the protoplasm of the one-celled amoeba.

Karl Marx (1818-1883) also dismissed God. In his place he installed an historical dialectic that, through its own natural impetus, brought all things into being. This “dialectic” is the clash between two categories that result in a third. Thus, the clash between a thesis and an antithesis produces a synthesis. On the human level, the clash between the proletariat (the poor) and the capitalists (the rich) produces communism. The dialectic of history, therefore, is an unstoppable natural force that leads to a communist state in which the individual person has no particular importance in himself.

Sigmund Freud (1856-1939) is the founder of psychoanalysis. His scientific interest is human behavior, which he looked upon in a purely materialistic manner. Therefore, man is not a spiritual being and religion is nothing more than a neurosis. Human beings are not free. They are the by-product of unconscious feelings and societal pressures. Freud had a dialectic of his own in which he saw a clash between the claims of instinct and the pressures of society. The “Id” was his term for man’s basic instinct whose antithesis was the “super-ego” or moral sense. This clash resulted in a compromised “ego,” but not in a free human being.

In summary, the notion of the human being has gone through four stages of diminishment in the modern world. The first on a cosmic level in which he could no longer think of himself as occupying a privileged position in the universe. Secondly, Darwin, whose field of inquiry is all of nature, reduced man to being the product of chance. Marx, whose field of study was society, reduced man to a being whose only importance was his participation in a communist social system. Finally, Freud, who studied the mind of the individual, viewed him as a spiritless entity who acted in accordance with a clash of opposite forces.

In the modern world, as we move to smaller and smaller fields of study, that is, from the universe as a whole, to nature, to human society, and to the mind of man, the diminishment of man becomes more pronounced. As George Will has stated, “the makers of the modern mind — Darwin, Marx, Freud — either taught or have been construed to have taught that man is, in various ways, passive and plastic to the pressures of his surroundings… history, physics, biology, psychology, and sociology all have been made to seem to teach that man is not free” (Statecraft as Soulcraft, 58).

One of the great challenges in the modern world is how to resolve an excessive admiration for science with the diminishment of man that has been brought about by scientists. The sociologist, George Simmel has spoken wisely on the problem when he advised that science should stay within its own natural limits. Accordingly, he stated that “whenever any particular branch of science attempts to give answers of universal validity, answers on ultimate questions concerning Man and the Universe, it oversteps its borders and goes wrong.”

Science can neither disprove the existence of God, nor can it solve the mystery of creation, the nature of freedom, nor the paradoxes of the human psyche. Rather, science deals with the physical world as the physical world and cannot, for that reason, deduce with certainty anything beyond the physical — that is, it cannot make any final claims of truth or falsity about anything that is properly the object of meta-physical studies — such as theology. Rather, science is at its best when it remains science.

The diminishment of man has never been an issue for the Catholic Church since, while it affirms the value of science, it also understands the breadth of philosophy, the relevance of theology, the wisdom of the Bible, and the consistency of its tradition — all of which speak more properly about this same metaphysical reality to which science has no direct access.

The progressive diminishment of man can be seen as a progressive assault on the human race. While much attention is being given to injustices expressed between various races, and rightly so, the issue of injustice against the notion of the “human race” itself has been largely ignored. Paying attention to particular races while neglected the all-encompassing human race must hamper efforts to improve relations between the particular races. It would be like refurbishing apartments in a building that is condemned. If the building collapses, the apartments collapse along with it. The first business in improving relations between the races is to improve the broader notion of the human race. Accepting the notion that the human race consists of beings that are no more dignified than trousered apes, soulless citizens or sophisticated robots, is the very worst form of racism. It is racism against the human race.