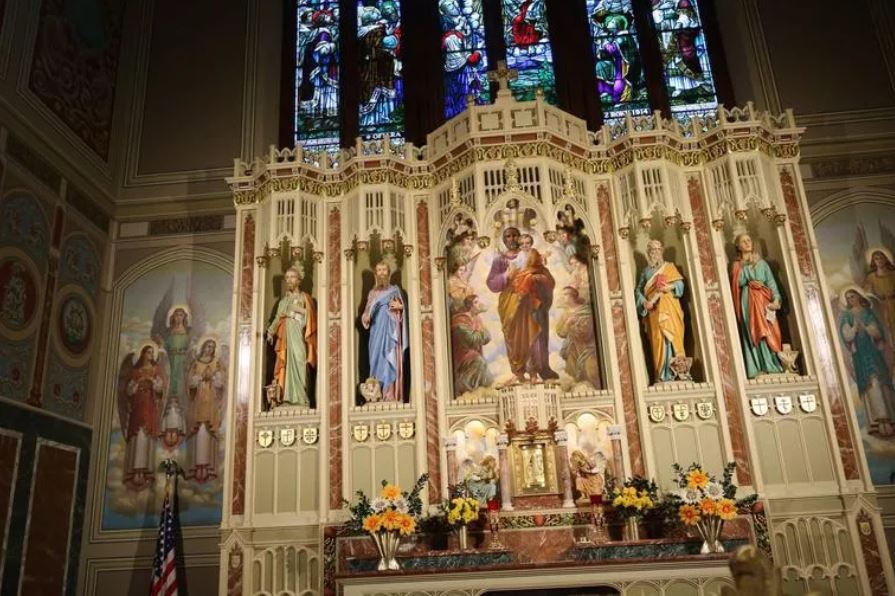 Travel to Webster, Massachusetts, to pray at a beautiful church dedicated to the earthly father of Jesus.

St. Joseph Basilica in Webster, Massachusetts, the third named as one of New England’s half-dozen basilicas, is one of the most beautiful of churches honoring the greatest saint in heaven after Mary, his holy spouse. Yet it keeps a rather humble profile, as did St. Joseph.

Webster is located midway between the state’s two largest cities — Boston and Springfield. Once a large mill town bustling with shoe factories, it might not seem the likeliest place for a basilica to be found. But it prompts the faihful to recall that Nazareth was a humble village, too.

The striking brick basilica stands on a residential hillside covered with modest houses. Its twin towers and spires stretch high above the surrounding neighborhood. St. Joseph, in statue form, watches over this humble scene from the high peak in the central gable. Imagine what a blessing it was for the many thousands of early immigrant-parishioners working in the nearby mills to live in these houses in the shadow of this church.

It was the humble Polish immigrants who established this church and parish in 1887, the first Polish-American church in New England. The growing congregation soon meant a larger church had to be planned. In 1912, the present structure was built by Msgr. Anthony Cyran; decades later, in 1990, it underwent a truly magnificent renovation under the guidance of Msgr. Anthony Czarnecki.

The edifice in adorned with much liturgical art. But first, visitors encounter the front doors, which look like something Bernini’s best pupil might have sculpted. A combination of American craftsmanship and Polish artistry, they’re formed of pure bronze panels depicting the 15 Mysteries of the Rosary. The tympanum above them is filled with a high relief showing Jesus as the Good Shepherd.

The first sight of the beautiful sanctuary offers a symphony of color, leaving the faithful awestruck.

Rich murals fill the nave, the sanctuary area and the large chapel of reservation that opens to full view behind it. Splendid stained-glass windows surround the prayerful space with visuals of important New Testament events. Colorful statuary adds to the holy tone.

The art is highlighted by intricate scrollwork and abundant, colorful marbles, meant to give a hint of the incredible beauty and majesty of God. It’s easy to imagine this church as a tiny peek through a heavenly doorway.

“This provides the catechesis of the church,” Msgr. Czarnecki, the pastor at the time St. Joseph’s was elevated to a basilica, explained. “The colors, the art, the murals speak of the mysteries of God in a way that can be understood by the people. It’s the profound truth presented in a form of simple art.”

There’s a wealth of spiritual lessons, inspiration and encouragement in the 55 life-size murals alone. They offer opportunities to meditate upon various biblical events to saints and Catholic devotions, highlighting the Marriage of Joseph and Mary, the Flight of the Holy Family Into Egypt, the Death of St. Joseph, the Apparition of the Blessed Mother to St. Casimir, Sts. Cyril and Methodius as the “Apostles to the Slavic Nations” and Our Lady of Czestochowa depicted with the saints of Poland. These murals, housed within highly ornate painted frames and scrollwork, line the lofty ceiling. Their jewel-like tones, especially blues and reds, recall Renaissance masterpieces.

The whole arched wall spanning the remodeled sanctuary carries a monumental mural that ties the Holy Sacrifice of the Mass to Old Testament figures — Melchizadek and Abraham with Isaac. From on high in the arch’s apex, the Holy Trinity is portrayed over the sanctuary, as depicted colorful choirs of angels are shown in adoration on either side.

The brilliant golden reredos houses the tabernacle, flanked by renditions of kneeling Italian marble angels. In a huge mural above, St. Joseph is highlighted appearing in heavenly glory, holding his earthly son for all to see. Joyful, praying angels are pictured surrounding them in reverent repose.

Colorful statues of the Four Evangelists, looking like honor guards, occupy elaborate niches on either side of this rendering of St. Joseph and the Living Word.

Midway along the nave, a statue of St. Joseph now occupies a shrine installed as part of the original confessional — likewise on the opposite side, this time with a statue of Joseph’s mother-in-law, St. Anne.

The scenes on the original stained-glass windows from Munich glow in multicolored beauty as they illustrate the Nativity and Adoration of the Shepherds, the Holy Family in Nazareth and Jesus Blessing the Children.

The three-year restoration and renovation project of this church that replaced the original was carried out with one overall purpose: for the glory of God. After the Neo-Renaissance style interior was completed, Cardinal Edmund Szoka of the Vatican was present at the church’s 1997 rededication. Cardinal Stanisław Dziwisz, St. John Paul II’s close friend, also visited this edifying edifice.

A year later, St. Joseph’s was elevated to a basilica, not just because of its beauty, but because of its major historical significance and shrine-like spirituality. The restoration also intended to preserve the parish’s ethnic heritage, which paved the way for 74 other Polish-American parishes in New England.

For that monumental restoration, years of candle soot had destroyed the pigments of original murals, so all had to be restored and reconstructed by artists from Poland, Colorado, and Florida. One such specialist was an international expert on Renaissance art.

At the same time, several new murals, like the ones down the center of the soaring ceiling, were added to reflect contemporary saints of the Church, including saintly Americans. Scenes spotlight the likes of Sts. Elizabeth Ann Seton, Frances Cabrini, John Neumann, Padre Pio and Maximillian Kolbe as well as Blessed Mary Angela Truszkowska, foundress of the Felician Sisters, an order that staffed the basilica’s school since 1892, once fully and now as some of the teaching staff.

Huge new murals joined the originals. On one side of the sanctuary, Jesus appears manifesting himself as the Divine Mercy to St. Faustina; on the other side, Our Lady of Czestochowa appears over the monastery of Jasna Gora.

To the left of the sanctuary, an altar honors the Sacred Heart with its statue. Nearby, a wall mural presents Jesus appearing to St. Faustina as the Divine Mercy. To the right side, an altar honors our Blessed Mother with a large statue honoring the Rosary. In this representation, Mary is shown wearing a beautiful gold crown and a second “crown” behind it encircles it, with 12 shining stars.

In the choir, an angelic “orchestra” accompanies a pictorial St. Cecilia at a heavenly organ. A mural that spans the entire choir facade captures the life of Pope St. John Paul II, with his birthplace of Wadowice on one side and the Vatican on the other. In addition, vibrant portrait medallions of 16 Polish saints and blesseds appear above each gold-leafed capital of the nave’s marble columns.

Depictions of angels form choirs or appear as tall guardians standing attentively between ceiling murals to fill this entire scene.

St. Joseph’s architecture also lifts minds to heavenly realms as it respects, preserves and enhances the original design. With a colorful and extensive palette of colors and designs, the marble work is also a visual focal point. White marble, with its delicate colorations, fills the sanctuary and lines walls under the windows in the nave. Green marble from Greece and deep red marble with its fine white grains from Spain define different borders and inlays.

Corinthian columns support the 2,000-pound altar of beautiful green marble from Florence. Across the front is carved Mysterium Fidei (“The Mystery of Faith”). Below it is a presentation of the Last Supper matching fine Renaissance sculpting.

Off the vestibule, Italian marble columns and the most beautiful red marble from Albania enhance the new Chapel of Our Lady of Czestochowa. The icon of the Black Madonna, Queen of Poland, and symbol of national survival, was touched to the original icon in Poland and blessed by Pope John Paul II. Near this depiction stands a statue of St. Joseph holding the Child Jesus. John Paul II is remembered outside the basilica, too — in a very large statue near the church. He is shown with arms extended to welcome one and all to St. Joseph’s.

In the vestibule, the restored historic life-size crucifix was used at the church’s first mission in 1918.

The stability of the community and their service and dedication to the church has passed from generation to generation. It’s evident in the stained-glass windows — in many cases they were restored by the same family that originally donated them.

This edifice indeed glorifies God and honors St. Joseph, who was of royal lineage, and Mary, Queen of Heaven and Earth

The painstaking artistry and workmanship, much of it done by the humble parishioners and local talent, follows their patron’s example, reflecting the meticulous care and flawless master craftsmanship the saintly carpenter of Nazareth assuredly put into all his work.

For the Year of St. Joseph, the basilica was designated a place of pilgrimage, with people visiting by groups or individually throughout the year, especially on St. Joseph’s Day, March 19.

They come to a reverent place of prayer.

“Basilicas and shrines, although slightly different, imply high expectations,” said Father Grzegorz Chodkowski, the current pastor. “Devotion to St. Joseph is the heart of the basilica.”

Praising the Masculine Virtues of...