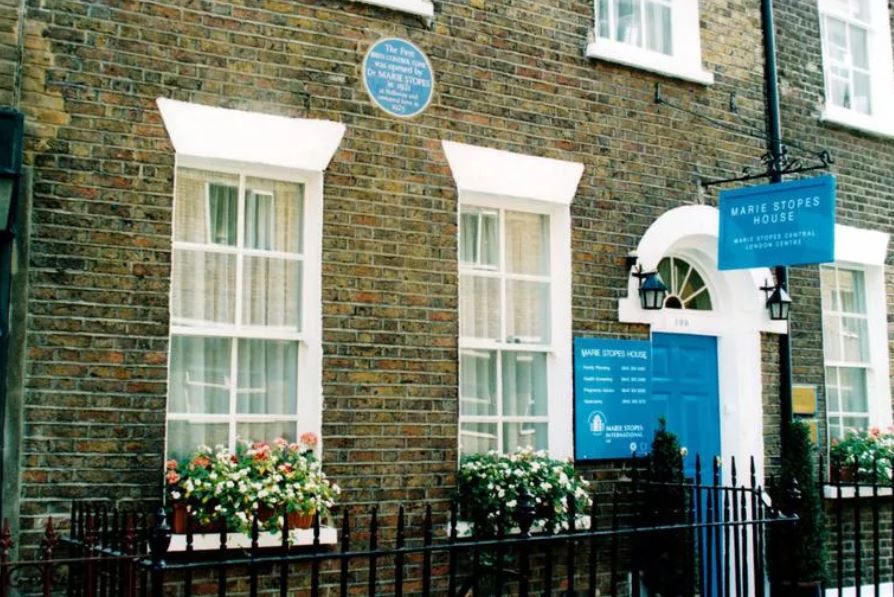 LONDON — At the end of May 2021, rumors began to circulate that the central London Whitfield Street abortion center, run by MSI Reproductive Choices (MSI), had unexpectedly closed.

Welcoming the news, Catherine Robinson, spokeswoman for pro-life charity Right to Life, told the Register June 2, “The closure [was] particularly significant since this is where the founders of Marie Stopes International started their first abortion center.”

Marie Stopes, who like Margaret Sanger championed artificial birth control and eugenics, had established Britain’s first “birth-control clinic” in north London in 1921. A short time later, she moved her operation to a central London address: 108 Whitfield St., where it became known as the Marie Stopes Mothers’ Clinic.

In 1958, Stopes died; and by 1976, the facility was in financial difficulties and faced closure. Soon after, however, the building lease was purchased, and so began the modern abortion-providing organization known as Marie Stopes International. In November 2020 this name was changed to MSI Reproductive Choices (MSI) in order to distance itself from Stopes’ views on eugenics.

Robinson went on to single out for praise the pro-life witnesses who, for many years outside the building on Whitfield Street, had “provided invaluable help to pregnant women and MSI staff seeking a better future.”

She added, “Every life that has been saved by pro-life people offering support outside the now-closed center is a testament to the effectiveness of pro-life street witness.”

“When I heard the news [of the closure], I just couldn’t believe it,” said Alina Dulgheriu, who was helped by that pro-life witness in 2011. “I felt deeply moved and remembered the first time I went there for my appointment to have an abortion.”

“The news of this facility closure made my heart burst with joy,” she told the Register June 2. Dulgheriu had been helped to keep her child through the aid of The Good Counsel Network. She is living proof of the power of such pro-life witness and says that “the presence of these ‘saints’ in front of abortion facilities is necessary and needed to guide mothers [to understand that] there is another choice: You can have your baby.”

In recent years the Whitfield Street abortion center had become the focus of pro-life vigils, involving prayer and witness on the sidewalk outside the facility. The vigil often consisted of perhaps just one or two, normally women, praying, sometimes on their knees, outside the building, as well handing out plastic rosaries to anyone who would take one. Watching over the vigil was an icon of Our Lady of Guadalupe.

The pro-life groups 40 Days for Life and The Good Counsel Network have been at the forefront of this witness.

Speaking to the Register June 2, Clare McCullough, director of The Good Counsel Network, said, “We are so very grateful to God for the closure of this abortion center. It has confirmed our faith in the power of persevering in prayer and that being there day in, day out, offering alternatives always bears fruit in the end.”

However, McCullough was not naïve about the motives of MSI in deciding to close the Whitfield Street facility.

“We know MSI are pursuing other strategies and still working to increase the number of abortions via ‘at home’ abortion-pill services.” For all that, the closing of a prominent central London address dedicated to the killing of the unborn, one with historic associations and with “flagship’ status for MSI is hugely symbolic.” She added, “It is a blessing that no more women will be hurt there and no more [unborn] children killed.”

These sentiments were echoed by Robert Colquhoun, the U.K.-based 40 Days for Life director of international campaigns, who told the Register June 2 that the closure “is certainly an answer to prayer after an 11-year nearly-continuous prayer vigil outside.” He estimates that “hundreds of babies have been saved on this street alone.” Furthermore, he sees this latest news as evidence of how, “in the end, evil exhausts itself.”

Like McCullough, Colquhoun senses a change of strategy by MSI, claiming that it is now targeting its services at the developing world, especially Africa. He is clear that 40 Days for Life shall continue to “pray and work for a world where abortion is unthinkable and will continue to pray outside abortion centers worldwide. Street witness — specifically prayer vigils outside abortion centers — is a wonderful way to witness for the unborn: to save lives, inspire hearts and minds and impact eternal souls.”

Speaking of “the eternal,” it was on April 26, 2018, the feast day of Our Lady of Good Counsel, when a Mass of thanksgiving was offered for the Whitfield Street center’s closure. The celebrant, Father Stephen Boyle, does not think the subsequent closure was simply down to that one Mass, however. Instead, he said it was due to “continuous prayer over years: a sign of the power of prayer, with the proviso that there has to be perseverance.” He told the Register June 3 that he also saw the persevering pro-life witness at the former abortion center as a clear “sign of the effectiveness of a lay-run organization — such as The Good Counsel Network — in the pro-life cause.”

The contrast, financially and organizationally, between a pro-life group like The Good Counsel Network, which is largely run with the help of volunteers, and a multinational abortion provider such as MSI remains stark.

During 2020, and despite the global pandemic, the MSI website boasts of having “prevented 13.4 million unintended pregnancies, [and] 5.6 million unsafe abortions averted.” The United Kingdom government Care Quality Commission inspection report from 2017 stated that MSI performs around 70,000 abortions per year in Britain. The report goes on to state statistics specific to the Whitfield Street center: “From May 2016 to April 2017, MSI Central London carried out 1811 surgical termination of pregnancy procedures and 1404 early medical abortions.” The MSI 2019 annual report stated: “In 2019, we secured total income of £308.3m [$437million].”

The Register reached out to MSI to ask for comment on and confirmation of the closure of the Whitfield operation, but, to date, there has been no reply. The MSI website, however, has removed all mention of its former “flagship” facility. Internet search engines describe the Whitfield Street center as “permanently closed.”

The date the rumors began that the Whitfield address had closed its doors for the last time was May 29, the vigil of G.K. Chesterton’s birthday. Curiously, the British Catholic convert writer who died in 1936 has been at the forefront of the Whitfield Street vigils. For years now, his intercession has been invoked outside the facility to stop the practice of abortion taking place there.

Speaking to the Register June 2, Stuart McCullough of the Catholic G.K. Chesterton Society noted the date of the news and further added: “The news of the closure of this abortion center came from a photographer working for Chesterton’s Estate Agents, a firm formerly owned by G.K. Chesterton’s family.”

All coincidence, perhaps, but then McCullough points out the incontrovertible fact that, for the “last three years, we asked people to say the G.K. Chesterton Prayer for this abortion center to close.”

Now, seemingly, it has.

The Expectant Mother and the Pink...