‘Dignity’ as Dangerous? Alasdair MacIntyre and ‘the Power of the Catholic Intellectual Ecosystem’ 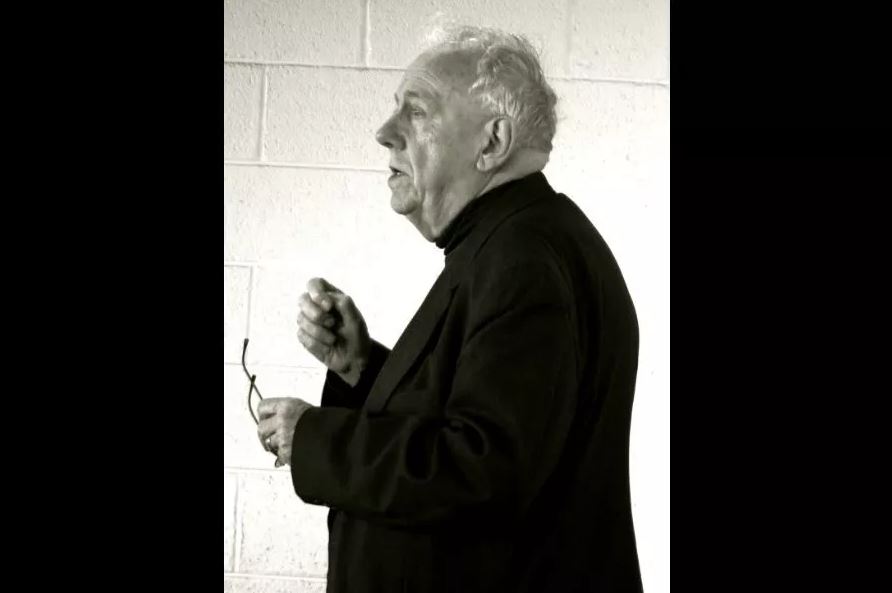 ‘Dignity’ as Dangerous? Alasdair MacIntyre and ‘the Power of the Catholic Intellectual Ecosystem’

This discourse matters, and it’s shaping perspectives throughout the Catholic world.

Why should an ordinary Catholic care about what happens at a muckety-muck academic conference?

It’s a fair question, and I expect it’s one that more than a few Catholics have asked when coming across coverage of Alasdair MacIntyre’s provocative speech at the annual “fall conference” put on by the DeNicola Center for Ethics and Culture at Notre Dame, an event I’ve fondly described as “nerd prom,” with more academics in scarves than you can shake a stick at (to be completely forthcoming, I wore a cappuccino-colored turtleneck sweater one of the days).

To review: the theme of this year’s conference was “Human Dignity in a Secular Age,” the collective goal of the various keynote speeches and paper presentations to articulate not only the conceptual foundations of “human dignity,” but also its practical implications in a variety of contexts, from writing and education to medicine and the legal system.

But MacIntyre — or “Big Mac” as some call him, a nod to 92-year-old’s status as possibly the most important living Catholic philosopher — had something else in mind. In the paper he presented, “Human Dignity: A Puzzling and Possibly Dangerous Idea?” MacIntyre called into question the very concept of “human dignity,” or at least our contemporary use of it, which serves as the basis for present-day Catholic political engagement. In his estimation, this version of “dignity” is a word without much meaning. It was introduced into the post-WWII lexicon as a convenient term that could be contrasted with the atrocities of the Nazi regime while being vague enough for parties with deeply divergent worldviews to agree upon when drafting documents like the Universal Declaration of Human Rights. On this account, to be for dignity is simply to be against certain evils committed against human persons.

The problem? According to MacIntyre, this version of dignity is too “minimal,” a primarily “negative” precept that reduces our sense of political duty to one of merely preventing social evils. Dignity, the philosopher argued, has replaced the more substantive and positive concept of justice, as articulated by St. Thomas Aquinas as a basis for a Catholic approach to ordering society. Justice is far more demanding than dignity because it emphasizes the proactive role society must play in ensuring each person has access to the goods needed to reach her ultimate end as a rational creature — knowledge and love of God. MacIntyre made this point by pointing to slavery and abortion. Dignity might be able to tell you that both practices are evil and should be prevented, but justice demands that the material needs of both former slaves and vulnerable mothers and children are provided for.

But the question remains: if you’re not a philosopher or a theologian, why should you care about what MacIntyre said? Why does it matter? Why is it worth bringing to the attention of readers of the National Catholic Register what an old, Scottish philosopher had to say to a room full of tweed-wearing academics?

I have two reasons — one more catechetical, the other more barebones practical.

The catechetical answer is pretty basic. As Catholics, we follow God, who is Truth itself. We should be open to discovering and living according to the Truth wherever we find it — including at a philosophy conference. This doesn’t mean we need to become experts on every topic under the sun; but it just as strongly demands that we don’t dismiss philosophical claims as “irrelevant” or disconnected from real life, which reveals a dangerous pseudo-materialistic perspective. Instead, our first question should be if they’re true or not. If MacIntyre’s claims about how we should order political life are true, we should exercise prudence and discern how to live accordingly.

But the more “practical” answer is that, regardless of whether or not MacIntyre’s take is accurate, there’s good reason to think it will have on-the-ground ramifications for the way Catholics live in America in the coming generations.

Why? In part, because MacIntyre is enormously influential in the Catholic intellectual world. The moral philosopher has something of a mystic aura about him, and his profound knack for questioning the basis of so much of our ordinary moral language and practices has the ability to turn one’s world upside down. Reading his seminal After Virtue is still considered something of a rite of passage among educated Catholics, a prerequisite for taking part in the ongoing conversation about a Catholic social ethic and its relation to the modern liberal nation-state. (Important note: “liberal” here refers to the broad political perspective that society should be primarily ordered toward the promotion of individual liberty. So in America, both “conservatives” and “liberals” are typically liberal.) His annual speech at the CEC conference — which, as far as I know, is the only public speaking he does nowadays — is easily the most jampacked event over the entire three-day stretch, something like the masses turning out to hear what the oracle might have to say.

If you want further proof of MacIntyre’s influence and the wider impact of what he said, just consider the responses his talk generated across the Catholic intellectual sphere over this past week. Catholics who are critical of America’s political foundation of pluralistic liberalism were eager to highlight MacIntyre’s speech and connect it to their own arguments: CUA theologian Chad Pecknold, for instance, used the talk to argue that a society without a civic religion loses its basis and coherence. The website Ius Et Iustitium started with MacIntyre as a basis for arguing that the articulations of human rights should be replaced by jurisprudence, “the science of saying what is each person’s due in a particular case.” And Pat Smith took the opportunity to gloat a bit, tweeting facetiously that he was “going around to the shaken-up right-liberals [conservatives who embrace political liberalism] after Big Mac’s talk and giving them copies of Grenier on objective right.”

Those same right-liberals (or at least those less eager to abandon the liberal order), however, were also quick to engage with MacIntyre’s speech, but, in their case, to downplay or disagree. In a lengthy Twitter thread, political scientist Jason Blakely, a fellow at the Nova Forum for Catholic Thought, critiqued what he called MacIntyre’s “tendency to reduce hermeneutic complexity to polemical caricature.” Roberto De La Noval, a theologian who teaches at Notre Dame, said the speech was “fairly troubling” and “failed to reflect anything distinctively Christian.” And Ave Maria political scientist James Patterson recently published a response to both MacIntyre and Pecknold entitled “Doing Justice to Human Dignity.”

These various responses to MacIntyre’s speech differed, but they were all united in the fact that they recognized that what the philosopher said needed to be engaged with, as it has the potential to shape how Catholics engaged in these sorts of questions think about their answers.

However, you might point out, we’re still only in the realm of Catholic intellectuals and academics. How does what they think about such seemingly esoteric topics as the conceptual foundation for political life impact the rest of us?

To which I’d respond — the way any other idea that gains traction in academia might eventually come to affect us. Many Catholics can see how the thought of academics like Marx or Locke or, more recently, the critical race theorists, eventually come to shape our institutions and discourse at a very practical and every-day level. But the same kind of thing happens in the Catholic world. In fact, a Protestant author just described this as “the power of the Catholic Intellectual Ecosystem,” the process by which ideas matriculate from the Catholic academia to more popular levels, like the seminary, apostolate or publishing house, and eventually to the level of the Catholic school, parish and family. This isn’t some kind of creepy conspiracy. It seems like a fairly natural way in which high-level reflection trickles down into everyday life.

And in fact, on the topic of Catholic criticisms of liberalism, there’s good reason to think that these ideas are already gaining significant traction. This is in part due to the vacuum created by the weakening of the “governing consensus” at the national, secular level of American politics. The weakening of the liberal order has given room for Catholic critiques of American liberalism — which have always been there — to assert themselves with renewed vigor and confidence. “Is America a Tyranny?” is the theme of an upcoming conference put on by the Steubenville, Ohio-based Catholic outfit, New Polity. Some of the leading Catholic conservative “illiberals” — Notre Dame’s Patrick Deneen, Harvard Law’s Adrian Vermeule, University of Dallas’ Gladden Pappin and the aforementioned Pecknold — recently launched their own platform, The Postliberal Order. These efforts are increasingly well-organized and visible.

And these ideas and happenings are already the topics of conversation among young Catholic intellectuals. When I was at Notre Dame for the conference, I spoke with the editors of the Irish Rover, an independent Catholic student newspaper. Each of them were well-versed in the particular ins and outs of current debates between the so-called Catholic integralists and the so-called right-liberal Catholics. To be sure, the integralists are a small faction, and they certainly don’t represent the only option for a post-liberal Catholic to take; but they are loud, and know how to draw attention to themselves and their ideas.

As a result, I hear from friends around the country that the Catholic critiques of liberalism have never been more widely-discussed among young Catholics, both among undergrads at Catholic colleges, but also among Capitol Hill staffers. The question these young people are asking is not “How can I be a good Catholic within pluralistic liberal society?” but “Can I be a good Catholic within a pluralist liberal society? And, if not, what are the alternatives?”

Remember, I’m not making the point that MacIntyre’s critique of dignity-based politics — and the wider Catholic critique of political liberalism writ large — are correct. I’m not entirely sure what I think about all that. I’m simply making the point that this discourse matters, and that it will — in fact, already is — flowing out of Catholic academia and into more popular levels of the Catholic world, shaping the perspectives of the people who will advise our bishops, teach in our schools and write in our newspapers.

To answer my original question, I suppose an ordinary Catholic need not care much about what happened at Notre Dame’s Ethics and Culture conference. Just know that MacIntyre’s speech, and the larger conversation about Catholicism and liberalism, will have and is having real-life consequences, and will shape how present and future generations go about being Catholic in America.

Why Does God Allow Bad Things to H...