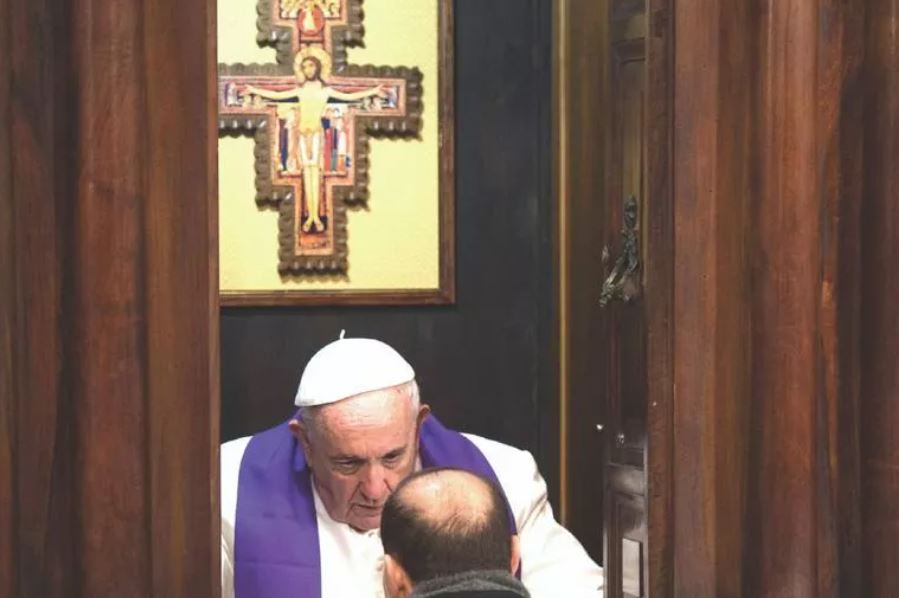 COMMENTARY: The fitting remedy to a hardening of the heart is ardent devotion to Divine Mercy.

The night Pope Francis was elected, I was in Rome providing television commentary for EWTN and writing for various news outlets. Unable to sleep, and wanting to get to know better the new Holy Father so that I could help others come to know him faster, I downloaded a copy of his 2010 book-length interview, El Jesuita (eventually translated into English as Pope Francis: Conversations With Jorge Bergoglio) and started speed-reading.

About three in the morning, I got to a passage that made me slam on the contemplative breaks.

“For me,” he said, “feeling oneself a sinner is one of the most beautiful things that can happen, if it leads to its ultimate consequences. … When a person becomes conscious that he is a sinner and is saved by Jesus, he proclaims this truth to himself and discovers the pearl of great price, the treasure buried in the field. He discovers the greatest thing in life: that there is someone who loves him profoundly, who gave his life for him.”

That was the experience he himself had as a 16-year-old during confession, when he experienced God calling him to be a priest. It’s what caused him to choose as his episcopal and papal motto Miserando atque Eligendo — in reference to how Jesus, passing by the tax collector’s booth where Matthew was, “saw him through the eyes of mercy and chose him” — pointing to how God, who came to sinners, calls us often straight from our sins. It’s what prompted him to accept the papacy with the words, “I am a sinner, but having entrusted myself to the infinite mercy and patience of our Lord Jesus Christ and in a spirit of penance, I accept.” It’s what inspired him to say in his first Angelus greeting, “God never tires of forgiving us, but it’s we who tire of asking for forgiveness” and to pray that we would never tire of asking what God never tires to give. It’s what roused him to declare a Jubilee of Mercy and establish the “missionaries of mercy.” It’s what prompted him, based on the Parables of the Lost Sons, Lost Sheep and Lost Coin, to proclaim that “God’s greatest joy is forgiving,” to urge frequent reception of the sacrament of confession, and to ask us to help others to come to receive that same sacramental gift.

Despite the joy that comes both to God and us through feeling oneself a sinner infinitely loved and forgiven by God, the future Pope continued, many Catholics have sadly never had this fundamental Christian experience. “There are people who believe the right things, who have received catechesis and accepted the Christian faith in some way, but who do not have the experience of having been saved,” Cardinal Bergoglio said. When we were like a child drowning in a river, Christ jumped into the water to save us, and died so that we might live, he said. But there are people who refuse this analogy, “who always have escape hatches from the situation of drowning and who therefore lack the experience of who they are.”

He concluded, “I believe that only we great sinners have this grace.”

Only sinners need a Savior. Only the sick, as Jesus said to the Pharisees, need a physician (Mark 2:17). The only way we will experience “the greatest thing in life” is to recognize that we are “great sinners.” The only way each of us will appreciate the depth of the Lord’s love is to grasp, as we confess at the beginning of each Mass, that “I have greatly sinned … through my most grievous fault.”

The knowledge we gain of God through receiving his mercy makes us, St. Ambrose taught in the fourth century, even better off than we would have been had we never sinned and needed God’s mercy.

“We who have sinned more have gained more,” Ambrose prayed to the Lord in a commentary on the Psalms, “because your grace [of mercy] makes us more blessed than our absence of fault does.” In one of the Ambrosian liturgical prefaces he inspired, the Church praises God because “You bent down over our wounds and healed us, giving us a medicine stronger than our afflictions, a mercy greater than our fault. In this way even sin, by virtue of your invincible love, served to elevate us to the divine life.”

The problem is that many refuse to recognize sin or to admit that they’re sinners. There’s an eclipse of conscience and a loss of the sense of sin that Pope Pius XI once said was the greatest sin of the 20th century. Pope St. John Paul II commented that secularism — living as if God does not exist — eventually leads us to seek to eliminate all vestiges of God from our daily life. We reduce sin from what offends God to what offends man. We deny or relativize moral norms we don’t like. Rather than take responsibility for our free actions, we blame our failings on our upbringing, or on society or on others.

Many are tempted, John Paul II wrote, “to replace exaggerated attitudes of the past with other exaggerations: From seeing sin everywhere they pass to not recognizing it anywhere; from too much emphasis on the fear of eternal punishment they pass to preaching a love of God that excludes any punishment deserved by sin; from severity in trying to correct erroneous consciences they pass to a kind of respect for conscience that excludes the duty of telling the truth.”

There are countless examples of this trend. We saw it notoriously in March, in response to the Vatican’s Congregation for the Doctrine of the Faith’s document reiterating that the Church cannot bless same-sex unions. The upshot of the criticism was anger that the Church reminded the world, based on the deposit of faith, that same-sex sexual relations are sinful, not holy, and therefore obviously cannot be blessed. The world wants sin to be canonized, not confessed and absolved. The Lamb of God came into the world to take away sin, not to hallow it.

On this point, Pope Francis throughout his papacy has repeatedly distinguished between “sinners” and the “corrupt.” The corrupt, he says, are “sinners like us” but have become “solidified in sin such that they don’t feel the need for God.” A sinner does not want to sin, he states, “but is weak … and so he goes to the Lord and asks to be forgiven.” Someone who is corrupt denies he’s a sinner in need of mercy.

Jesus, Pope Francis says, “does not call [the corrupt] simply sinners. He calls them hypocrites.” Full of self-deceit, they become like “whitewashed tombs” or “varnished putrefaction.” Though Jesus never tires of forgiving, the minimal prerequisite is openness to receiving that clemency, and the corrupt refuse to acknowledge such a need. “This is also a danger for us,” Pope Francis reminds us, lest we be tempted to pick up stones or point fingers.

The fitting remedy to this hardening of the heart is ardent devotion to Divine Mercy, revealed by Jesus to St. Faustina Kowalska, and lived in a particular way in this novena between Good Friday and Divine Mercy Sunday. This helps us not only to grow in trust of God’s mercy and in our recognition that we are great sinners deeply loved by God, but moves us to come to receive that gift and share it. Divine Mercy is the path that will lead us to what the Pope calls the greatest thing in life.

A Guide to Divine Mercy: The Feast...

Seeing Jesus Through the Eyes of M...