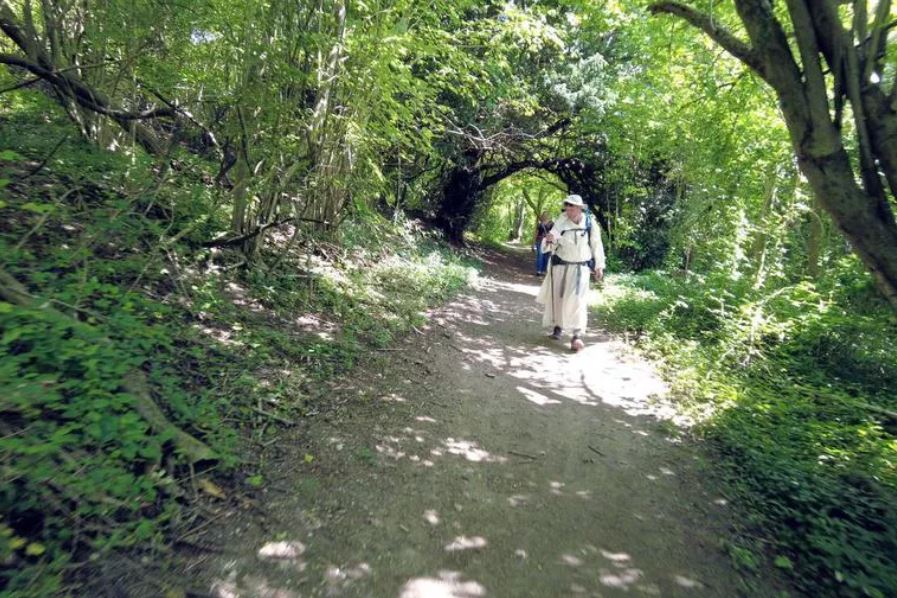 The pilgrims depart Aylesford for Otford, and celebrate the feast of the Transfiguration and the 800th anniversary of St. Dominic’s death as they walk to Dartford.

Four British Dominicans are following the footsteps of their predecessors on a walking pilgrimage in England. Readers are invited to send their prayer intentions and join the pilgrimage virtually at the Dominican Jubilee website, and through this Register series. (See also Days 1 and 2, and 3 and 4.)

Carmelite Priory (Aylesford). We had arrived relatively late in Aylesford the previous evening, at the end of quite a long day’s walk. And so after morning prayer Father Francis, the prior, gave us a tour of the chapels and premises of the shrine and its magnificent art, each chapel containing beautiful ceramics by the Polish artist Adam Kossowski.

Aylesford is England’s oldest Carmelite Priory, founded by St. Simon Stock in 1242 (just a couple of decades after the Dominicans arrived). It was dissolved by Henry VIII in 1538, and the friars returned in the 1940s. The skull of St. Simon, which we were able to venerate, is in one of the chapels.

Burham. We were set on our way out of Aylesford with a hearty breakfast, and joined by another fellow pilgrim who lived locally. It has been such a joy each day to be joined by different pilgrims from various walks of life — some old friends of the friars or the Dominican Order more generally, others who simply came across us online and were interested to join. We’ve had at least one person each day, and some days next week we’re expecting up to 20.

Halling. Our path took us out of Aylesford and along the Medway River toward Halling. Very conveniently a bridge across the river had been built in the last few years, saving us a considerable extra distance.

Whitehorse Wood. Once over the river, we entered the beautiful arched trees of Whitehorse Wood, and the shaded area accompanied by a nice breeze made for very pleasant walking.

Each day as we walk, we pray the Rosary three or even four times, followed by a period of silence. During the Rosary we pray for all the intentions you have sent us, and it is also a time for personal prayer, to express gratitude to God for all the immense graces of our journey so far.

St. George’s Church (Wrotham). We stopped for lunch in a small village called Wrotham (pronounced Root-ham as we were frequently reminded), a village that contains the oldest church dedicated to St. George in the country.

From there we continued along the pilgrims’ way toward Kemsing, our final stop for the day. The medieval path has now of course become a road, and at points quite a busy one, but our white habits are thankfully pretty visible for oncoming cars.

Church of the Most Holy Trinity (Otford). Friday, Aug. 6, was the feast of the Transfiguration, and also the 800th anniversary of the death of St. Dominic, so all the more reason for us to walk with a spring in our step.

In the morning we visited the church graveyard where the wife of our host for that night was buried, and there said the De Profundis (Psalm 129/130), which we pray each day for the dead. Prayers for the dead are an integral aspect of Dominican life, and so those who die in the Order know they will be well prayed for!

The Road to Dartford. Having spent the last five days traveling broadly west, today we turned north toward the capital. Of course we don’t know the exact route taken by Friar Gilbert of Fresney and his band of Dominicans when they first arrived in this country, but London is their next certain recorded stop. Our path for the whole day wended its way along the River Darent, after which our final destination, Dartford, is named.

Mid-morning we passed along some wonderful lavender fields that were just being harvested. The refreshing smell made for a very nice change from the sewage plant we walked through on the way out of Aylesford the previous morning!

Dartford. Dartford itself brought the excitement of the site of the medieval monastery of Dominican nuns, where the Retable we visited a couple of days previously would have originated. Brother Bede gave a short introduction to the site and the Dominican nuns, and we sang a short antiphon to Our Lady in thanksgiving for the nuns of Dartford and for all Dominican nuns across the world.

St. Dominic of course founded a community of nuns before the friars were ever an organized group, and it is a point we often remember, particularly as it shows us that the contemplative life, the life of prayer, has to precede the apostolic life, the life of preaching. Without prayer, you will have nothing to preach.

Sadly there are no longer any Dominican nuns in this country, although there are plenty of vibrant communities of apostolic Dominican sisters. Dartford was closed at the Reformation, and the nuns went abroad into exile, and when they came back finally settled on the Isle of Wight, at Carisbrooke, until the 1980s.

St. Anselm’s Parish (Dartford). The day ended at the parish of St. Anselm’s, where our arrival providentially coincided with their parish devotions for the first Friday of the month. Father Samuel and Father Toby both preached at different Masses and heard confessions, and we gathered plenty more prayer intentions to carry with us along the way.

“Rise, and Have No Fear.” There seemed to be something particularly appropriate about concluding our walk on the Feast of the Transfiguration with an all-night vigil of Eucharistic adoration (although safe to say all four of us got some sleep, else the next day’s walking might have been rather difficult.)

There is the wonderful line of St. Peter’s at the top of Mount Tabor when he says to Christ, “Lord, it is well that we are here; if you wish I will make three booths here” (Matthew 17:4). St. Peter wants to stay in the moment, to hold it close, to remain there in the presence of the Lord. It seems much like time spent in front of the Blessed Sacrament, beholding the splendor of our Eucharistic Lord.

However, as pilgrimage very concretely reminds us, we have to keep moving. Christ does not take up St. Peter’s offer. Rather, he tells them to “rise, and have no fear” before leading the disciples back down the mountain.

So often on this pilgrimage there have been places we’ve stayed, encounters on the journey or conversations among the group, which have been moments to treasure that you don’t want to end. But the very purpose of a pilgrimage is to keep going — to give thanks for the graces received on the way, but to keep moving. For, as on our earthly journey, we must know that the only true and final rest, the only moment that we really can hold on to for eternity, is in heaven.

This is surely why our Lord did not take up St. Peter’s offer, for as says in another place: “In my Father’s house are many rooms; if it were not so, would I have told you that I go to prepare a place for you?” (John 14:2).
Share With:
Previous Article