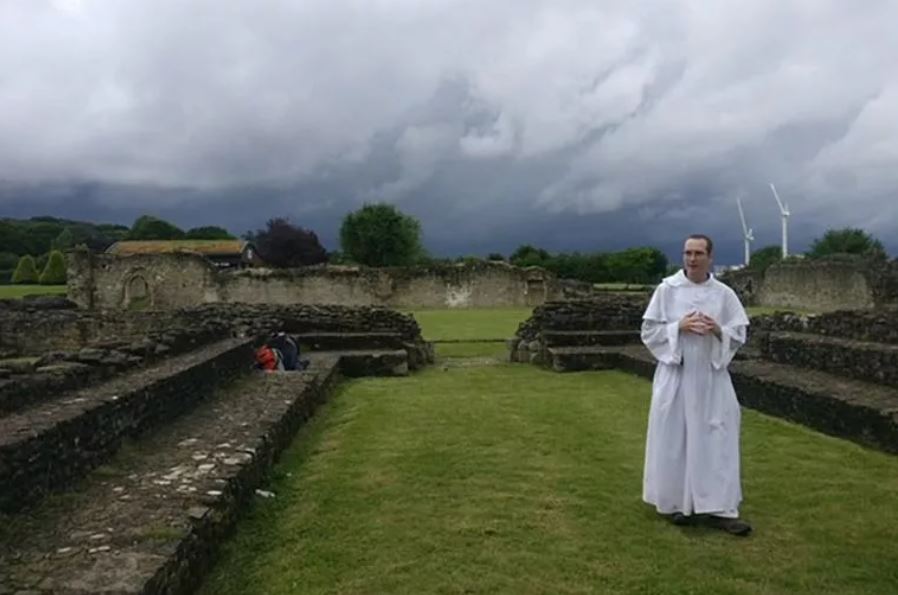 The pilgrims depart Dartford, cross the River Thames at Greenwich and tour central London as they make their way to the Dominican Priory to celebrate the feast of St. Dominic.

Four British Dominicans are following the footsteps of their predecessors on a walking pilgrimage in England. Readers are invited to send their prayer intentions and join the pilgrimage virtually at the Dominican Jubilee website, and through this series. (See also Days 1 and 2, and 3 and 4, and 5 and 6.)

Dartford. Dartford has clearly fallen upon hard times in recent years. Many say the town center died when a massive shopping center was erected out of town. Nonetheless, there was much vibrancy in the Parish of St Anselm’s. Most of those whom we had seen in the church, as we went to bed the night before, were still there adoring the Lord in the morning, and others had joined them.

Having celebrated a 6am Mass, we hit the road once more. Along with a number of pilgrims who had written in advance about joining, some from St. Anselm’s decided to come on an impromptu pilgrimage — and so, numbers swollen (like our feet), we headed off in the pouring rain.

Erith. North of Dartford, on the south bank of the Thames, lies Erith, famous for having the longest pier in London. Our route took us past a Capuchin friary, and we decided to ring on the bell to say hello and to ask if some might use the bathroom.

The door was answered by the provincial, just about to go for a run, but, without a moment’s hesitation, he invited all of us in, and showed us through to the refectory for tea and coffee. He also made the house chapel available for our use. A few of us asked the question of ourselves, “Would I have been so spontaneous in welcoming the stranger, or might I have made my excuses?’

Lesnes Abbey. Buoyed by tea, coffee, prayer and some cakes that one of our fellow pilgrims had pulled from his bag, after a trudge through some rather uninspiring housing with views of the heavy industry on the Thames, our trail took us through some pleasant woodland, before emerging to overlook the ruins of Lesnes Abbey.

Richard de Luci, the chief justiciar of England under Henry II, founded Lesnes Abbey in 1178. Back then it was known as the Abbey of St. Mary and St. Thomas the Martyr. Many have speculated the abbey was founded in repentance for his role in the murder of Thomas Becket. The new monastery was operated under Augustinian rule. However, just a year later, De Luci resigned from office and retired to Lesnes. He died 3 months later and was buried in the abbey’s chapter house. Lesnes was subsequently kept in the family, with de Luci’s great-granddaughter being raised at Lesnes.

Under Henry VIII in 1525, the abbey was one of the first monastic houses to be suppressed in the famous Dissolution of the Monasteries. It sustained just 5 canons under an abbot, and license dictated that monasteries hosting fewer than seven inmates be suppressed. It was closed by Cardinal Thomas Wolsey, with the profits of this suppression intended to finance Cardinal Wolsey’s College at Oxford. All of the monastic buildings were destroyed, with only the abbot’s own lodging spared, which was incorporated into a farmhouse.

As was so often the case, what was lost was so much more than just a place of prayer. The abbey had been responsible for the draining of the marshes and the maintenance of the banks of the Thames in the vicinity. All this would fall into disrepair and the cost of lining the coffers of the corpulent King Henry VIII damaged the very fabric of the land, spiritual and physical.

The ruins of Lesnes Abbey are helpfully signed, and so it was that we gathered in the old Chapter Room for a ferverino on the spiritual work of mercy of admonishing the sinner. Brother Bede emphasized that this work must always start with the recognition of my own sin if we are to avoid the pitfall of self-righteousness.

As he was talking, a rather dramatic backdrop took shape of black clouds and forks of lightning and thunderclaps, and it all seemed most appropriate for the talk. Fortunately, we dodged the worst of the rain, while we stopped for coffee, and had an opportunity to practice a corporal work of mercy as our order filled a loyalty card for a free coffee, which we asked the delightful staff to give to the next person who looked like they might really need it.

Greenwich. From Lesnes our walk took across a number of green commons before we reached the beautiful Blackheath, a former plague burial ground, and then headed into Greenwich Park, where we picked up two new pilgrims who had heard about us on “Medieval Twitter!”

Greenwich Park affords magnificent views of London, and Greenwich itself is full of interesting places to stop, such as the Maritime Museum, the Cutty Sark, and the Meridian Line, where Greenwich Mean Time is measured. However, on a pilgrimage these are distractions from the task at hand, and the task was to arrive in Wapping on time for Vespers, and so we headed under the river, but without getting wet, thanks to the marvelous feat of engineering that is the Greenwich Foot Tunnel. We also discovered as we sang the Salve Regina that the tunnel has a marvelous acoustic.

Canary Wharf and Wapping. The foot tunnel emerges close to the modern financial hub of London, Canary Wharf, a place where friars in habits are not a common site, and there was a lot of interest as we followed the path along the river, passing through the scenic Limehouse, into the quiet streets of Wapping — formerly busy docks, but now a quiet residential area.

No doubt due to the large number of Irish dockers who worked in Wapping, the beautiful church is dedicated to St. Patrick, and it was here that we received a warm welcome from the parish priest and spent the night — two friars in the presbytery and two with a generous parishioner, whose husband had been involved in the design of the Pope Paul VI Hall in the Vatican, along with several London Underground Stations in the East of London.

For one of the friars, Wapping was a return to his parish for seven years before entering the Order, and it was a great joy to be reunited with many who had nourished him in the faith, and, a particular treat to see the children of some couples who were only recently married all those years ago.

Tower Hill. Day 8 saw a change of pace, as much of the day would be spent on a Catholic history walk with the inimitable Joanna Bogle, author of several books. A short walk north from Wapping saw us reach the beautiful Church of English Martyrs, appropriately dedicated given its proximity to the Tower of London, where so many Catholics were imprisoned for the faith and martyred nearby. The church itself is part of the Gothic revival and contains a particularly beautiful shrine to Our Lady, much loved by the Fathers of the Oblates of Mary Immaculate who staff the church.

It was here that we began our tour with Joanna Bogle who, after a quick overview of Catholic history in England, led us to the a large monument to all those men and boys who served in the Merchant Navy, and who lost their lives at sea, ensuring that those who remained on land would not lose theirs through starvation. The number of dead is staggering, and a reminder of how we all too easily forget the sacrifice of those we cannot see.

Nearby there is another monument, much smaller but which marks a number of those who died for their religious beliefs. While some died for the one true faith, to shame of its adherents, many who died on this spot died for remaining true to their Protestant convictions, and so the names of St. Thomas More and St. John Fisher are joined by others, who while misguided, showed integrity in the face of adversity, and whose deaths caution Catholics against a certain conceit that can arise with regards to the Reformation. The violence was all too often a two-way street.

The Three Medieval Priories. From Tower Hill we headed up to The Monument, a mighty column which commemorates the fire of London, and then onto the sites of each of the medieval priories of the Order in London between c. 1234 and the reign of Mary Tudor.

The first was located near Holborn at Lincoln’s Inn Fields, the second in the area now known as Blackfriars with both a Blackfriars Bridge and a Blackfriars Pub, replete with images of jolly friars, a joy still present in the faces of the modern four despite the rain.

The third site, and the only one with an extant church, is the now-Anglican parish of St. Bartholomew the Great, famously featured in one of the weddings in the hit comedy Four Weddings and a Funeral. Originally an Augustinian priory, it was given to the Dominicans in the reign of Mary Tudor, before being confiscated in the reign of Elizabeth I.

The church itself is still very beautiful, but has two particular features of note. The first is that the Lady Chapel is the sight of only recorded visitation of the Blessed Virgin Mary in London, in the 12th century. The second is that this very same chapel was hived off as a printers’ workshop in the Reformation, and it was in this incarnation where Benjamin Franklin served an apprenticeship in 1725.

The Rosary Shrine. After the Reformation the English Dominicans were largely in exile until Catholic Emancipation in the 19th century. Only in the late 19th century, after a period over 300 years, would the friars return to London in their present site in northwest London.

The stunning church of Our Lady of the Rosary and St. Dominic’s was made the diocesan Rosary Shrine only a few years ago. The walk to the priory involved traversing several of London’s major shopping areas. It is noteworthy how on pilgrimage, shops that might otherwise attract seem largely irrelevant. When you are carrying all you need on your back you become conscious of how more things would burden you, a realization good to keep in life more generally — a recognition that our possessions can become burdens when the multiply.

The current priory in Haverstock Hill shares a providential water-link with the second priory as the River Fleet runs close to it, which river would have provided the friars of the second priory with both fresh water and fish.

Arriving at the priory the friars were warmly welcomed by the prior, and then proceeded to celebrate a Pilgrims’ Mass for St. Dominic’s Day. On our founder’s feast, it was most noteworthy in the light of our present pilgrimage to remember his great works of mercy — weeping for sinners, selling his books to feed the poor — but also that in a situation where heresies were winning over orthodoxy, that he sought not to use coercion, but an appeal to reason. An appeal which the sons of St. Dominic still seek to give their all in making as beautiful, well-reasoned and authentic lives as their founder did over 800 years ago.

Catholics in China told to celebra...