Dublin’s new Catholic archbishop at installation Mass: ‘I come to you with hope in my heart’ 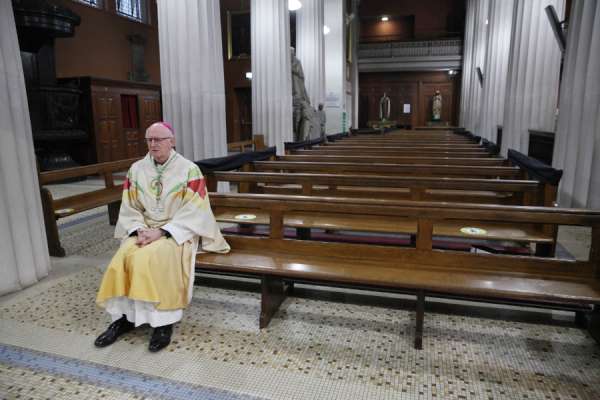 Dublin’s new Catholic archbishop at installation Mass: ‘I come to you with hope in my heart’

Archbishop Dermot Farrell made the comment on Feb. 2 as he was installed at St. Mary’s Pro-Cathedral before a strictly limited congregation due to the coronavirus crisis.

“I am happy to embrace this new mission. I come to you with hope in my heart,” he said in his homily.

He continued: ”Faith is not an invitation to put up with life’s difficulties and frustrations. Rather, faith asks us to see these as a time of grace. This time — both in the crisis that is the global pandemic and in the many crises confronting the Church — this very time, with all its frustration and fear, is rich with possibilities, already carrying the future, overflowing with Christ.”

The 66-year-old former bishop of Ossory in eastern Ireland was named archbishop of Dublin by Pope Francis on Dec. 29, succeeding Archbishop Diarmuid Martin.

Farrell paid tribute to his predecessor, who oversaw the archdiocese from 2004 to 2020, during a bruising period for the Church.

The new archbishop said: “I want to reiterate what I said on Dec. 29: you saw profoundly the woundedness of the Body of Christ, and provided forceful and unambiguous leadership, especially in the safeguarding of children where you took courageous positions. The Church and wider society owe you a profound debt of gratitude. We must do everything ‘never to slip back.’”

Farrell also thanked the Nigerian Archbishop Jude Thaddeus Okolo, Apostolic Nuncio to Ireland since 2017. He said he was grateful for “his kindness, his humanity, and his infectious spirit of joy.”

The installation Mass was live-streamed via the cathedral webcam and on Facebook for those unable to attend because of the suspension of public worship in Ireland.

Noting that his installation fell on the World Day of Consecrated Life, the archbishop offered words of encouragement to consecrated men and women, underlining that they were part of Ireland’s future, not only its history.

“They have been at the forefront of renewal in the Church, taking bold initiatives, and making significant sacrifices, putting flesh on the hope that was within them,” he said.

“This is not a mission that belongs to the past. In another age, they were at the forefront of addressing the educational, social, and health of those who risked being left behind. Today they continue their prophetic ministry in the service of those whom our society might prefer not to see: those who suffer from addiction, those who struggle to put food on the table, women trafficked, those without a roof over their heads, or a front door of their own.”

Dermot Farrell was born in 1954, the eldest of seven children, in Garthy, Co. Westmeath. After attending seminary at St. Patrick’s College, Maynooth, he was ordained to the priesthood in 1980.

Pope Francis named him bishop of Ossory in 2018. He chose the episcopal motto “Adiutorium nostrum in nomine Domini” (“Our help is in the name of the Lord”), from Psalm 124.

As archbishop of Dublin, he is responsible not only for Catholics in Ireland’s capital city but also in surrounding areas.

Preaching on the Feast of the Presentation of the Lord, Farrell stressed that all Catholics were responsible for the success of the Church’s mission in Dublin archdiocese.

“It is an illusion to envisage a plan of evangelization which is carried out only by clergy while the rest of the faithful are merely onlookers,” he said.

“They constitute the vast majority of the people of God. Indeed, as St. John Henry Newman remarked perceptively, ‘The Church would seem foolish without them.’”

He continued: “In this light, leadership in the Church is not about telling people what to do; rather it is about promoting co-responsibility and overcoming the mindset which runs the risk of relegating the baptized to a subordinate role, effectively keeping them on the edges of Church life.”

“That is what we mean by a synodal Church — a church on the way with each other. The very first place synodality is expressed is at parish level. If it doesn’t happen in the parish, it will not happen at all!”