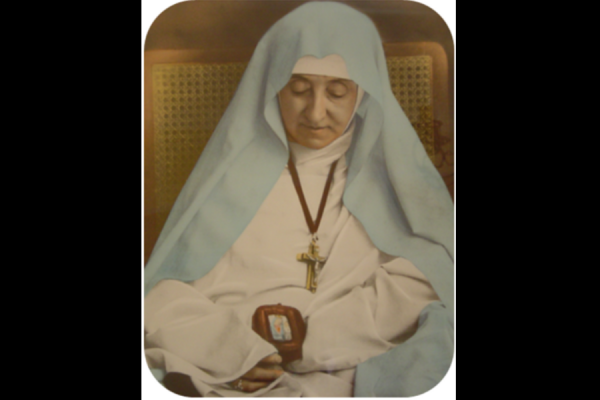 CNA Staff, Feb 12, 2021 / 04:00 am (CNA).- An English Catholic bishop has appealed for prayers to advance the cause of a religious sister who devoted her life to caring for the sick.

Preaching at a live-streamed Mass on Feb. 8, Bishop Patrick McKinney urged people to visit the tomb of Mother Mary Potter, founder of the Little Company of Mary, at St Barnabas Cathedral in Nottingham, a city in the East Midlands region.

“When the COVID situation improves, I would encourage people to pray at her tomb in the cathedral and to seek her prayerful intercession,” the bishop of Nottingham said at the Mass in his private chapel.

“A miracle that could be attributed to Mother Mary’s intercession would certainly speed up the Church’s careful process of canonization.”

Potter was born in London in 1847. Due to congenital heart and lung disease, she suffered from lifelong poor health, including a chronic cough. Her father left home for Australia a year after her birth and never returned.

After briefly trying her vocation with the Sisters of Mercy in Brighton, she became convinced that she was called by God to found a community of religious sisters dedicated to serving the sick and dying.

At the invitation of Bishop Edward Bagshawe of Nottingham, she began her mission in 1877 with two companions in a derelict stocking factory in a deprived area of the city, which had prospered during the Industrial Revolution thanks to its textile industry.

She eventually founded the Little Company of Mary, whose members wore a black habit and a distinctive pale blue veil. They fed the poor, educated local children, and visited the sick and dying.

Potter battled breast cancer and scarlet fever, and at times clashed with the bishop over the community’s direction.

In 1882, she overcame further ill health to travel to Rome to ask for Pope Leo XIII’s blessing on her work. The pope invited the sisters to open a house in Rome and in 1886 he declared the Little Company of Mary an institute of pontifical right.

McKinney said: “Frail in health herself from her earliest days, suffering with heart problems and, later in life, with cancer and tuberculosis, Mother Mary had a strong personal empathy for the sick and for the dying, and those high standards of nursing work and palliative and spiritual care continue now in many countries across the world where the Little Company of Mary sisters have their foundations.”

By the time Mother Mary Potter died, on April 9, 1913, the congregation had expanded as far as New Zealand. She was buried in Rome, but in 1997 her remains were transferred to Nottingham.

Concluding his homily, McKinney said: “How good it would be if we could also prefix the word ‘Saint’ to her name and her legacy here in Nottingham and in many parts of the world! I end by inviting you to join me in praying the prayer for her beatification.”

The prayer for Potter’s beatification reads: “O God, to whose glory the Little Company of Mary was founded by Venerable Mary Potter, grant that she may be beatified soon, so that her work and spirit may benefit still more the suffering members of Jesus Christ. Amen.”

“Mary, Mother of the Church, may this ardent apostle of your Maternal Heart be more widely known by special favors granted through her intercession. (Here make your petition) Our Father, Hail Mary, Glory Be.”

We have a lot to learn this Lent f...