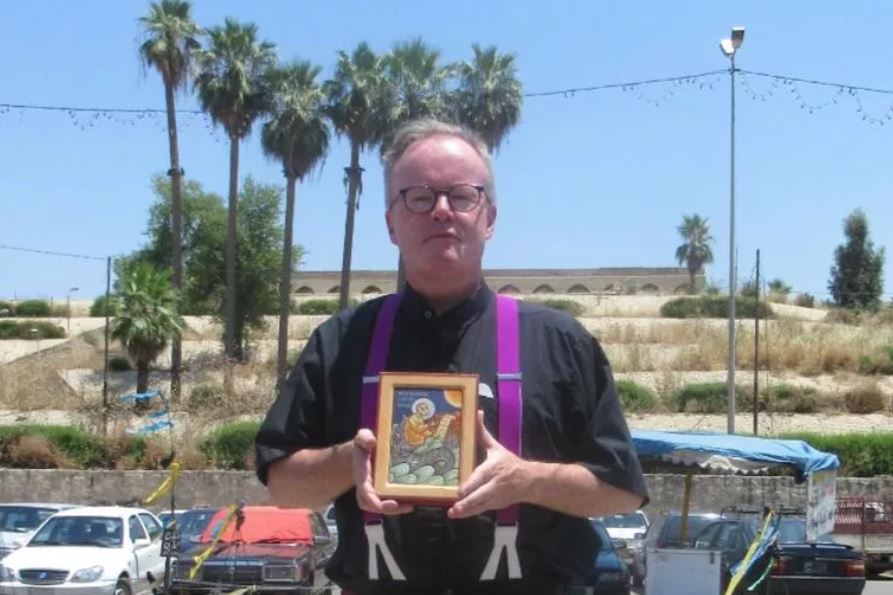 As Pope Francis embarks upon his apostolic trip to Iraq this week, Father Kiely asks, ‘Do we believe we are the Body of Christ that is being persecuted today?’

“In August 2014 while I was parish priest in Stowe, Vermont, ISIS swept across the Nineveh Plain; and, as a consequence, for the first time in 2000 years, there would be no Mass at Mosul. I asked myself: What could I do about this?”

This was how the idea that would become the charity Nasarean.org came to be.

From the start, Father Benedict Kiely wanted to keep any charitable initiative agile and focused. There were to be no international headquarters with scores of salaried employees. Instead, there were three aims: to pray for the persecuted Christians, to show solidarity with their suffering, and to gather and give alms to them.

Initially, this was through the sale of rubber bracelets, a lapel badge and other items — all inscribed with a symbol of solidarity with the persecuted Christians in Iraq.

Father Kiely was surprised by how much money was raised through this simple idea. It revealed to him a deep desire on the part of Christians in the West to help their persecuted brothers and sisters. It got him thinking — and kept him thinking.

Even more thought-provoking was Father Kiely’s subsequent visit to Iraq in May 2015. There, he met the suffering Christians of that country. He experienced firsthand their plight. It was on that trip that he felt “a call within a call,” one that was to grow, so much so that, by the end of 2015, Father Kiely asked to see his then-bishop of Burlington, Bishop Christopher Coyne.

In 2016, Father Kiely asked for release from his priestly duties in Vermont with the intention of devoting himself solely to a new apostolate.

Born in London in 1963, Benedict Kiely grew up in Kent. At the age of 18, he entered seminary but left after four years. The time that followed involved varied employment, including: driving a double-decker bus, working in public relations and unloading books at London’s largest book shop. In 1989, however, he returned to the seminary, and, in 1994, he was ordained. Later, he was to minister in Vermont, before leaving the Diocese of Burlington in 2016. Today incardinated into the Personal Ordinariate of Our Lady of Walsingham, he spends his days working full time with Nasarean.org, which was founded in May 2016.

The U.S.-based charity raises and gives small amounts of money — $7-$8,000 — on an individual basis to help Iraqi Christians start their own family businesses. The money would be distributed to families through a network of priests across Iraq.

The Iraqi-based businesses started so far include: a taxi business, a bakery, a small furniture business, a shop for women’s clothes and accessories, and a chicken farm.

On Feb.15, 2021, the first coffee shop in Bartella, Iraq, owned by Karam Youseph and Robel Kheder, was opened with the help of donations made to Nasarean.org. “Once again, one family at a time: We are helping Iraqi Christians once driven out of their town by ISIS not just to survive, but thrive,” explained Father Kiely.

And it is not just in Iraq that the organization is making a difference.

In Syria — specifically in Damascus — several families have started food and vegetable shops. “We have also just begun helping some small businesses in Beirut, Lebanon, including a gym and a bakery, and we are looking at expanding very soon,” added Father Kiely.

“Small is beautiful,” he continued, “giving a small amount to each family to start a business in their own land, a hand-up not a handout, so they do not become refugees or dependent on aid. So we do not hand out money so that people do nothing. We give a one-off payment. Then they run their own business and, by so doing, feed their own families.”

The response in Iraq has been enthusiastic.

“The idea is to give people dignity by helping them start to run their own business,” explained Father Kiely. “Culturally, they respond well to this. That is because people want to run their own lives and thereby to give a future to their children.”

Alongside this practical help, there is another area of work in which Nasarean.org is actively engaged and which Father Kiely sees as just as important, namely, heightening awareness of the global persecution of Christians. In particular, the charity wishes to show the world, and especially Christians in the West, what is happening to Christians in Iraq.

So, as Pope Francis prepares to visit that country, what is the current situation there for Christians?

“Precarious,” replied Father Kiely. “Speaking to an Iraqi priest the other day, the Christians have not returned to their homeland. Previously, there were more than a million Christians before the 2003 invasion. Today, there are less than 200,000.” The main reasons for this, he insists, are to do with security and jobs. “When I visited last in 2019, every young person I spoke to wanted to leave. Australia is a popular destination.”

Historically, the Nineveh Plains area was “the castle for Christians,” the faith’s stronghold in the region.  But the advent of ISIS changed that centuries-old reality.

Currently, Father Kiely feels there may even be a longer-term threat to Christians on the Nineveh Plains from the Iranian-backed Shia militia, who, he says, are “trying to drive the Christians out from that region by ethnic cleansing.”

Father Kiely senses Christians are caught “in the crossfire of internal struggles between different Islamic groups in Iraq and feel powerless to do anything about this. In addition, many Iraqi Christians are despondent, in the belief that the world has turned a blind eye to their persecution.”

Yet as Father Kiely reminds the world through his work, this region “is the cradle of Christianity,” and Iraq has had a Christian presence for 2000 years.

So the ongoing effort is reminding people of this reality. In 2021, the irony is that Christians in the West often ask Father Kiely “when we brought the faith to the Middle East! My reply is: They brought it to us! It is only then that people are constantly telling me that they knew nothing about this.”

“People think that because ISIS is no longer on the news, then all is well,” continued Father Kiely. “The caliphate may have been defeated for now, but ISIS is not defeated. It [ISIS] is just another name for Islamic fundamentalism, and that continues on the rise. Alongside this, at the same time, Christians remain the most persecuted group in the world.” He went on to point out that if Iraqi Christians were a species of animal, they would be at the highest threat of extinction possible.

How has the COVID-19 pandemic affected Iraqi Christians?

“Dramatically!” replied Father Kiely. “For a start, it has stopped travel; so NGOs and others are not able to go to Iraq. I, too, have not been able to visit there for over a year now. Undoubtedly, Iraq has been hit hard by COVID-19. Thank God, people continue to be generous via Nasarean.org.” He points out that churches are closed in Iraq. Previously, Christians had been forced to close their churches by ISIS. Now, in theory, they are free to open them, but they have had to close them again. Father Kiely feels this is “a double psychological blow for them!”

As a result, he decided at the beginning of lockdown that his private chapel should be “a Chapel of the Persecuted.”

In spite of all the current restrictions, Father Kiely’s organization continues to operate, especially in its advocacy through the media for the persecuted. “I haven’t stopped my media work, even if I’m unable to speak directly to live audiences,” said Father Kiely.

“In addition to recording a weekly message for the persecuted, I’ve had to expand and adapt media appearances while looking for a home for a podcast on the persecuted around the world. My job is to use every media possibility to help Christians understand what is happening in Iraq and across the globe. Just look at what is happening in Nigeria, for example. More Christians have been killed there in one year than ISIS killed in Iraq between 2014-17. But nobody knows, or maybe no one is being told.”

“If you’re waiting for news of the persecuted Christians from the mainstream media, you’ll be waiting a long time,” continued Father Kiely. “Perhaps the [mainstream] media don’t believe, or want to believe, that there is a persecution of Christians.”

Across the Western world, as the state becomes ever more intrusive in people’s lives, are there lessons to be learned from the Christian experience of surviving persecution in the Middle East?

“The patriarch of the Syrian Orthodox Church has said that the Church is one holy, Catholic, apostolic and persecuted! This comes as no surprise to me, as Christ promised persecution for his followers. We have been lucky in the West not to suffer overt persecution for a long time. But why do we think this will continue forever? Perhaps our Christianity is not authentic enough to be persecuted? Any soft persecution in the West should not come as a surprise to us if our faith is truly authentic.”

Today, though, Father Kiely’s chief concern remains the plight of Christians in the Middle East. This concern motivates his ongoing work in raising awareness of what is happening there. “It’s a factual thing: The persecution of Christians is happening now more than at any time since the third century. And so we Christians in the West have to ask ourselves: Do we believe we are the Body of Christ that is being persecuted today?”