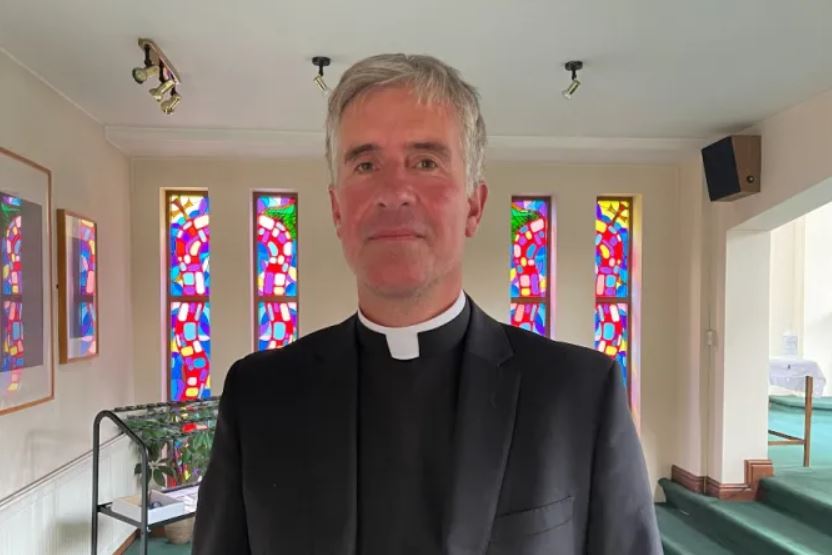 Fr. David Palmer, a priest of the Personal Ordinariate of Our Lady of Walsingham serving in the Diocese of Nottingham, England. / Courtesy photo.

The University of Nottingham announced Saturday that it will recognize Fr. David Palmer as a chaplain, after having refused recognition over comments on assisted suicide and abortion he had posted on social media.

“Following constructive and helpful dialogue with the Diocese of Nottingham over recent weeks, it has been agreed that Father David Palmer will be recognised … as university chaplain for the Catholic faith,” the university said Sept. 25.

Bishop Patrick McKinney of Nottingham commented, “I am very pleased that the university has now recognised my appointment of Father David Palmer as Catholic Chaplain, to work alongside the other university chaplains who give such great support to students and staff alike.”

The university has developed a new procedure for the recognition of chaplains, which “allows for a preparatory year to enable the nominated chaplain, the sponsoring faith body and the university to explore together if the role is right both for the individual and the multi-faith environment at Nottingham.”

The new procedure will include “regular engagement with current university chaplains of all faiths, students and the sponsoring faith body to determine the chaplain’s ability to: work in a large, international, multi-faith, secular, educational environment; willingness to represent the diversity of faith communities in a non-partisan way; present a strong personal spirituality whilst being able to manage disagreement and challenge; work as part of a chaplaincy team; demonstrate approachability and pastoral sensitivity,” the University of Nottingham said.

Fr. Palmer noted on Twitter Sept. 27 that “Lots of people helped us behind the scenes” in securing recognition of his appointment, and that the legal advice of ADF International and the Free Speech Union “was invaluable.”

The Free Speech Union wrote to the univerity’s vice-chancellor Sept. 2, reminding him that “the Equality Act 2010 makes it unlawful for a public institution to discriminate against someone on the basis of their religious or philosophical beliefs, and the fact that Fr. David’s appointment has been obstructed in this way … suggests that he is the victim of unlawful discrimination.”

Bishop McKinney said that “In developing a new approach to recognition and support for chaplains, I acknowledge that the university is striving to demonstrate its commitment to the importance of this role within the wider university experience. I appreciate the period of constructive dialogue which has led to this development, and I look forward to seeing the university’s chaplaincy continue to flourish. It is my hope that the chaplaincy will always be a safe space for people of all faiths and none to be helped to discuss difficult issues. It is important that the Catholic Church can be a part of these conversations and contribute to individuals’ search for truth and meaning in their lives.”

“For Catholic students, perhaps away from home for the first time, and for staff too, the presence of a Catholic priest within the University is an opportunity for them to be strengthened in their faith. Having seen the pastoral work Father David has undertaken from his parish in Lenton, I have every confidence that his presence on campus will be a blessing both for those of the Catholic community, and others in the wider university family who engage with the multi-faith environment,” he added.

The university’s registrar, Dr. Paul Greatrix, said that the new procedure for recognizing chaplains “will ensure that, in a spirit of support and collaboration, the university and faith leaders can welcome chaplains who will, absolutely, hold their faith primary whilst fully engaging with a multi-faith environment.”

“As a university we fully respect and safeguard our community’s freedom of speech and our chaplains’ expression of the tenets of their faith. The new procedure will ensure that our team of chaplains feel comfortable and supported in their work with students in what is a diverse and multi-faith community which has the full range of views on religious expression,” he continued.

The university had interviewed Fr. Palmer, a priest of the Personal Ordinariate of Our Lady of Walsingham, in June, and following this it wrote to Bishop McKinney expressing concern about the appointment.

At a July 1 meeting the university specified that the concerns related to Fr. Palmer’s posts on social media, highlighting one on assisted suicide and another on abortion.

“They referenced a tweet where I had referred to the proposed ‘assisted dying’ bill [introduced in Britain’s Parliament in May] as a bill to allow the NHS ‘to kill the vulnerable,’” Fr. Palmer told CNA via email in August.

“I was told it was fine for me to have this opinion, but they were concerned with how I expressed it. When I asked how they would suggest I express it, quite remarkably, they suggested I should call it ‘end of life care,’ which is a completely unacceptable policing of religious belief.”

Fr. Palmer also reported that the university objected to a tweet in which he had described abortion as the “slaughter of babies”.

A university spokesperson told CNA last month, “Our concern was not in relation to Fr. David’s views themselves, but the manner in which these views have been expressed in the context of our diverse community of people of many faiths.”

The priest told CNA that the university asked Bishop McKinney to provide an alternative priest, an invitation he declined.

The bishop had also appointed Fr. Palmer chaplain to Nottingham Trent University, which accepted the decision.

Fr. Palmer told CNA that he rejected Nottingham University’s explanation for its decision to deny him recognition.

“The university says they have ‘no issue with the expression of faith in robust terms,’ but this is precisely what they had an issue with,” he said.

He added: “The university claims to support ‘diversity and inclusion,’ but it appears that diversity only goes so far, certainly not as far as the Catholic chaplain being able to express ‘robustly’ mainstream Catholic beliefs.”

The University of Nottingham in November 2020 reached a settlement with a pro-life undergraduate student in a midwife program.

Julia Rynkiewicz, a 25-year-old Catholic, received an apology and payout after she was blocked from entering her program’s hospital placement phase after the university learned of her leadership of a pro-life student group.

The university overturned its decision, but Rynkiewicz sought an apology.

The British government introduced the Higher Education (Freedom of Speech) Bill earlier this year that could impose fines on universities if they fail to protect freedom of speech for students, staff, and visiting speakers.

The bill is currently at the report stage in the House of Commons.

In March 2018 a joint committee on human rights of the UK parliament noted troubling barriers to free speech at the nation’s universities, writing: “Whilst the original intention behind safe space policies may have been to ensure that minority or vulnerable groups can feel secure, in practice the concept of safe spaces has proved problematic, often marginalising the views of minority groups.”

“Minority groups or individuals holding unpopular opinions which are within the law should not be shut down nor be subject to undue additional scrutiny by student unions or universities,” the committee continued.

It added that “unless it is clearly understood that those exercising their rights to free speech within the law will not be shut down, there will be no incentive for their opponents to engage them in the debate and challenge needed to bring mutual understanding and maybe even to change attitudes.”