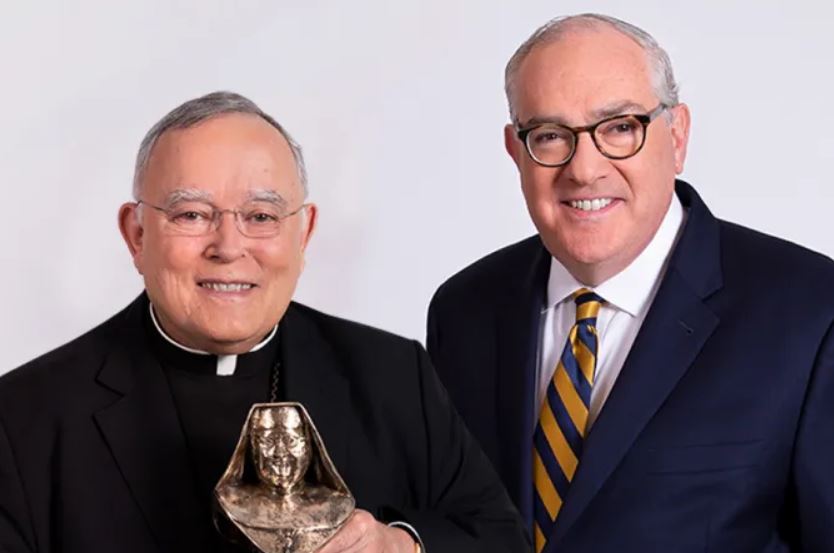 EWTN Chairman & Chief Executive Officer Michael P. Warsaw presented the inaugural award to Chaput during an Aug. 15 ceremony that was broadcast around the world by the Network. The date also marks the 40th anniversary of the Network’s launch on the Solemnity of the Assumption in 1981.

“This award was created as a way to recognize Mother Angelica and her legacy by honoring people who have devoted their lives in service to the Church, particularly in the service of the New Evangelization, just as Mother Angelica herself had done,” said Warsaw. “When we first proposed this award, there really was no one in my mind who was more deserving than Archbishop Chaput.”

The award was originally intended to be presented last year during an in-person event in Washington, D.C. Unfortunately, because of COVID, the event had to be cancelled. Instead the Network presented the award as part of a televised program transmitted to more than 380 million television households in 150 countries and territories, as well as across EWTN’s multiple digital and radio platforms.

Chaput, 76, retired in 2020 as archbishop of Philadelphia. Previously he had served as archbishop of Denver, and as bishop of Rapid City, South Dakota. The archbishop also recently stepped down from the Board of Governors of EWTN after 25 years of service, including 10 years of service as Vice Chairman. He frequently appeared with Mother Angelica on EWTN throughout the years and was the principal celebrant of her funeral Mass in 2016.

During the award ceremony, viewers heard reflections from the archbishop’s numerous friends, all of whom lauded him for empowering the laity and for encouraging and enabling the development of apostolates such as FOCUS (Fellowship of Catholic University Students), the Augustine Institute, ENDOW (Educating on the Nature and Dignity of Women), and many others.

During the televised event, Warsaw interviewed the archbishop about his service to the Church and his many years in support of EWTN and it mission. “In many ways, you’ve been a model of how a bishop can work with lay leaders to advance the Church and to evangelize,” Warsaw said.

Chaput said he himself was empowered by the Acts of the Apostles and by the words of Pope Benedict XVI who reminded everyone that responsibility for the Church is not just the mission of the clergy. “The laity doesn’t work for the clergy,” Chaput said. “We’re co-responsible together. I really believe that to be true.”

During the interview Chaput recalled the first television show he did with Mother Angelica during which she was talking about the damage that feminism was doing in the world and the Church. “I said, ‘Well, you’re a feminist. A different kind maybe, but nonetheless, you’re a feminist.’ And I remember she laughed loudly.

“I was hesitant to say that because I thought she might be offended, but she wasn’t,” Chaput continued. “She was her typical happy self, and nothing could … shock her. She could just respond to whatever you said. And so our days together were a real blessing, and I’m grateful to God that her work continues in EWTN today, and to the people who make it possible: our donors, and the people who staff the shows, as well as those who are the stars of the shows. All work together to continue that dream of Mother, to make the Gospel relevant and available to everybody in their homes.”

Chaput also noted that he had another thing in common with Mother: Both were always very proud to be Franciscans. That created a bond, but their friendship and their Franciscan spirituality also didn’t mean they always agreed.

Chaput, who served as the provincial of the Capuchin community in Denver before becoming a bishop, said that Franciscans are taught to trust God’s Providence and not to plan for the future. However, he did not take that to mean that his community should not have a budget. When he suggested that EWTN do the same, Mother refused.

“She thought it was a sin against God’s Providence,” Chaput said. “We had some serious arguments about that, but I never convinced her.”

Warsaw noted of Mother Angelica: “She always said to me that she believed that would be her witness to the world after she was gone, to trust in Providence. In his biography of Pope St. John Paul, George Weigel referred to him as ‘a witness to hope.’ I’ve often referred to Mother Angelica as the witness to Providence because that’s really always been at the core of her life. It’s instilled into the DNA of EWTN.”

The archbishop agreed. “The real heart of Franciscan spirituality is seeing the world as a daughter or son of God. And if God is our Father, we can trust Him. And if God is our Father, we are sisters and brothers in one another. … [Mother Angelica] demonstrated to us through her life that there’s no problem with trusting God because God is always faithful to His promises.”

Chaput offered two pieces of advice to those engaged in the New Evangelization, as Mother was.

First, he said: “No matter how old we’re getting or how much we’re suffering, if you look at things you should be grateful for, it gives you a joyful heart. …I don’t know what eternity is going to be like. St. Paul said we don’t have any idea what God has in store for those He loves and who love Him, but I’m looking forward with anticipation and joy to the adventure of Eternity, which I deeply believe in and am confident about.”

Second, the archbishop suggested that all who are involved in the New Evangelization should rise above discouragement and despair and maintain a sense of adventure.

“The world around us has changed and become so much more difficult than it was before. The temptation then is to despair…or, at least, to be discouraged…You stop seeing life as an adventure, but just something you have to endure,” Chaput said.

“I think it’s important for us to maintain a sense of adventure about the faith, that God has given us a difficult world, which should make the business of evangelization more exciting rather than less exciting. But we can’t do it in the old way. …We have to be creative and try to really respond to the world as it is rather than what we would hope it to be.”

Chaput continued: “So I encourage people to be enthusiastic, to be zealous, and to find friends who are the same so they don’t give in to discouragement and they make the world that God is giving us a place where his Word can be proclaimed with joy and confidence.”

Further information about the Mother Angelica Award and the ceremony can be found at www.ewtn.com/award.

In its 40th year, EWTN is the largest religious media network in the world. EWTN’s 11 TV channels are broadcast in multiple languages 24 hours a day, seven days a week to over 380 million television households in more than 150 countries and territories. EWTN platforms also include radio services transmitted through SIRIUS/XM, iHeart Radio, and over 500 domestic and international AM & FM radio affiliates; a worldwide shortwave radio service; one of the largest Catholic websites in the U.S.; electronic and print news services, including Catholic News Agency, The National Catholic Register newspaper, and several global news wire services, as well as EWTN Publishing, its book publishing division.

Cardinal Burke on a Ventilator Aft...