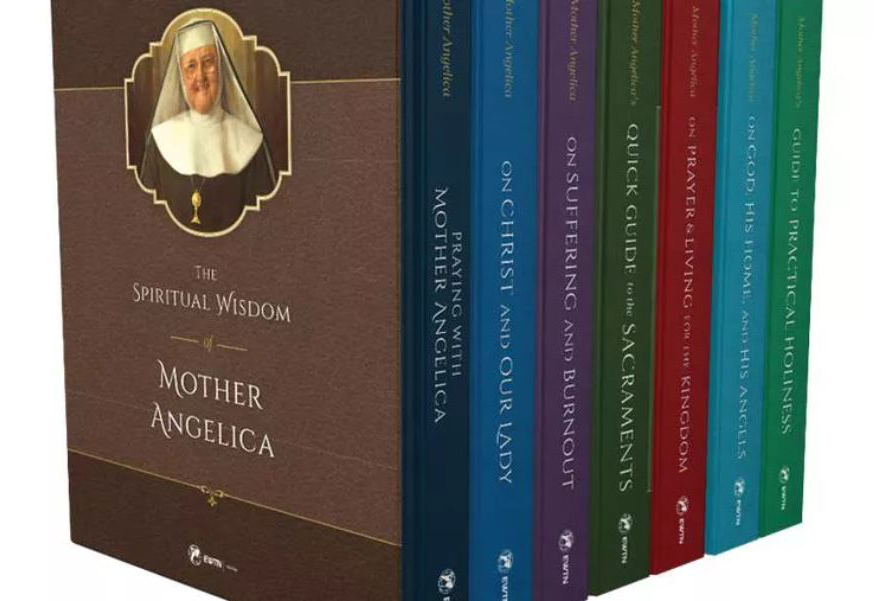 The books division gets good reads to the masses.

When EWTN Global Catholic Network formed a new book publishing group in summer 2015, as a joint venture with Sophia Institute Press, network leadership hoped the timing would fill a void in the religious publication marketplace.

This new nonprofit organization, EWTN Publishing Inc., has since published nearly 60 titles in both print and electronic form.

Her written works will be attractively repackaged, and content from Mother Angelica Live TV shows as well as other EWTN shows will be edited and turned into books.

Readers readily recognize the authors available, such as television and radio favorite Jesuit Father Mitch Pacwa, whose Wheat and Tares and The Proverbs Explained are part of the catalogue. Among the Churchmen authors is Archbishop Georg Gänswein, Pope Benedict XVI’s personal secretary, who wrote How the Catholic Church Can Restore Our Culture.

The latest 2021 releases include Mother Angelica’s Living the Scriptures, Web of Faith 2.0: A Curious Catholic’s Answers to Theological Questions by frequent EWTN TV co-hosts Father John Trigilio and Father Ken Brighenti, and A Biblical Way of Praying the Mass: The Eucharistic Wisdom of Venerable Bruno Lanteri by Oblate of the Virgin Mary Father Timothy Gallagher, another familiar EWTN figure.

Among EWTN Publishing’s releases are two books by Father of Mercy Wade Menezes, currently the assistant general of his religious congregation and an EWTN series and radio host.

“EWTN Publishing is a very important factor that contributes to EWTN’s global presence,” he told the Register. “Along with television, radio and the whole range of social-media technologies currently being employed by EWTN, the network’s publishing division is just one more avenue for the evangelization of the Church’s mission to promote the truths of the Gospel of our Lord Jesus Christ.”

He finds it an important platform for his two books released thus far: The Four Last Things: A Catechetical Guide to Death, Judgment, Heaven, and Hell and Overcoming the Evil Within: The Reality of Sin and the Transforming Power of God’s Grace and Mercy.

“The ‘printed page’ still holds weight within media, and rightly so,” he said. “There’s still something special about holding a literal book while reading — for starters, it enables one to take a break from the computer screen. EWTN Publishing has enabled me to publish books on important catechetical and doctrinal topics as another means to evangelize as a member of the Fathers of Mercy.”

Another popular EWTN author is Dr. Ray Guarendi, well-known for his radio and television shows, The Dr. Is In, heard on hundreds of radio stations and Sirius XM, and Living Right with Dr. Ray, aired by EWTN TV in more than 150 countries. His books are no less popular, including Raising Upright Kids in an Upside-Down World and the latest release, Jesus the Master Psychologist: Listen to Him.

“I have been with large secular publishers and many other publishers,” he explained to the Register. “My last three books have been with EWTN. They are professional; they are courteous; they are flexible. They allow me to work at my own pace, and they listen to any feedback I offer. All in all, a very professional and personal experience.”

“Quite simply, it allows me to talk about things of infinite value,” he added. “I do not have to shy away from speaking of God, faith and religion. I could write the same thing for a secular publisher, speaking the same truth. If I left out God, they would still see me speaking truth. However, with EWTN, I can proclaim where that truth comes from.”

He added, “Overall, I am absolutely delighted to be associated with EWTN Publishing. We are hoping to bring forth other things in the future.”

“People love reading about her spiritual wisdom on prayer, suffering, heaven and just about any topic she spoke on.”. “Her books and book sets are truly enjoyed, and new releases are always looked forward to with much anticipation,” Radlicz said.

Beyond Mother’s books, she added, “those folks that our EWTN listeners are familiar with from their appearances on the network also are very sought after, including Father Wade Menezes, Father Leo Clifford and Father John Horgan, to name a few.”

Devin Jones,  executive assistant to EWTN’s chairman and chief executive officer, Michael Warsaw, since  2015, said, “Mother Angelica began her evangelization in the early days by self-publishing individual ‘mini books,’ which were basically pamphlets or tracts. Mother saw the power, portability and ease of dissemination of these little mini books, which were printed by the nuns on presses in Irondale.”

“As with all EWTN’s entities, the mission of evangelization remains unchanged,” Jones said. “In this case, EWTN Publishing takes the form of the printed and digital word and carries on Mother’s publishing legacy, which was so timely and effective. Mother’s writings were borne out of prayer, inspired and written before the Most Blessed Sacrament, right here at Our Lady of the Angels Chapel in Irondale.”

Jones said he is pleased with the success of EWTN Publishing in a few short years. “The popularity of printing and digital and audio books remains strong, and we have seen this in our more than 50 book releases since our inception in 2015,” he explained. “Mother was keen to use all forms of media to evangelize and catechize, and we have the great advantage of a veritable treasure trove of television and radio material from which to choose. In this way, by publishing books based on EWTN television series, EWTN Publishing complements and augments our outreach and continues the urgent mission begun by Mother.”

Jones and editorial coordinator Taylor Wilson have been working on collaborating and advertising on various EWTN platforms because of “our common goal of bringing the Catholic faith to the world,” Jones said, with Mother’s own words as the cornerstone.

“We have been privileged to publish books by various cardinals and popular priests such, as Fathers Mitch Pacwa, Wade Menezes, Charles Connor, Brian Mullady, Timothy Gallagher, John Horgan and others,” he said. “Dr. Ray Guarendi’s books are always well-received, and we will be rereleasing some of his older works, as well as new books by Dr. David Anders and Johnnette Williams.”

Recalling that Mother Angelica used to self-publish children’s coloring books, EWTN Publishing followed her steps by releasing its first children’s book, ABC Get to Know the Saints with Me! by Caroline Perkins of EWTN’s ChurchPop.

Jones also noted that feedback has been exceptionally good, not only nationally but internationally: “We have also received many inquiries for foreign-language rights to publish our books, mostly in Europe and Asia.”

At the same time, EWTN Publishing continually receives a large amount of unsolicited manuscripts. Jones said it is because “they see the orthodoxy and popularity of EWTN and wish to publish with us, as a means to reach the largest possible audience.” He added, “We have also expanded to translate our books into Spanish, starting with Mother Angelica’s complete works.”

The schedule includes continuing to publish the usual two new books each month, and sometimes more, with the Spanish-language titles. Readers and fans should look for forthcoming books by Mother Angelica and popular hosts Fathers Pacwa and Father Menezes, as well as Father Charles Connor and Guarendi.

Jones said the short-term success of EWTN Publishing has confirmed the network’s decision to expand its mission,  as he has already seen “great, wonderful, popular international support from readers” and, “providentially, a renewed love for Mother and our mission — including from those who previously were not familiar with Mother or EWTN.”

The Friar Who Saved Christendom fr...