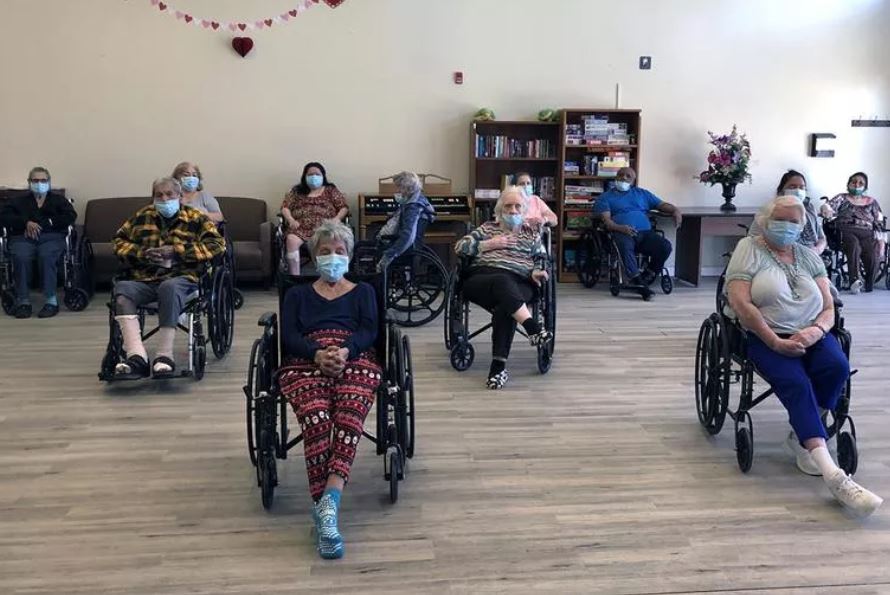 “In the midst of all this craziness and chaos, God is with us.”

For patients in long-term care centers, day-to-day life during the pandemic can be lonely and difficult. Long-term care facilities — including skilled nursing facilities and assisted living facilities – have strictly limited visitation, to help prevent the spread of COVID-19 among residents whose ages and conditions make them especially vulnerable to the illness. In late January or February 2020, the coronavirus necessitated a lockdown of the Oasis Pavilion Nursing and Rehabilitation Center in Casa Grande, Arizona. Since that time, family members have been unable to visit their institutionalized loved ones. Volunteers are not admitted to the center, nor is a priest permitted to celebrate Mass for the Catholic inpatients.

Dr. Anne Borik, medical director at the Oasis Center, noticed that a number of her patients were struggling with depression and anxiety. Confined to their rooms day after day, without the solace of family and friends, they were desolate and forlorn. As a Catholic physician, Dr. Borik has a passion for prayer and spirituality as an integral part of health care. “I really believe there’s a need for that,” she said. “When we pray with our patients, it matters! He hears us!”

Although the center’s disease prevention policies prohibited visits by chaplains or priests, Dr. Borik had full access to the residents. Borik devised a plan to help stave off the anxiety which accompanied hours, days and even weeks of solitary confinement: She invited residents to participate in a weekly Rosary in the center’s activity room. Borik expected that the Catholic residents might be interested; but with no other activities on the center’s calendar, soon people from other faiths (or no faith) joined, as well. “There was standing room only,” Dr. Borik reported, explaining that the large room was filled with patients in wheelchairs that were separated from one another by several feet. Soon there were 25 or 30 people joining in prayer each week. Under Dr. Borik’s leadership, the group began to accept prayer requests. Many of the patients, Borik reported, prayed not for themselves, but for other family members. Morale at the center was greatly lifted; and the center’s administrator told Dr. Borik that the subject had come up at a meeting of the Resident Council, and that everyone was talking about the Rosary!

When a member of the cooking staff contracted the virus but remained asymptomatic, she came to work. Once news of the employee’s illness came to light, the center was forced to once again close down and confine residents to their rooms. Dr. Borik was unwilling, though, to simply end the weekly prayer gathering. “We had to close down activities again,” Borik said, “so we decided to provide little MP3 players to everyone personally.” The patients were accustomed to Dr. Borik’s voice, so she recorded the Rosary for them. “So walking through the halls at Christmastime,” Borik smiled, “you would hear patients playing the Rosary in their rooms.”

The Impact of the Prayer Group on Patients

Dr. Borik shared several stories, explaining that the regular prayer gatherings had had a profound effect on the participants’ emotional well-being.

One of the center’s long-term residents, Margaret, was reportedly a first cousin of Archbishop Fulton Sheen. Margaret proudly displayed a photo of Sheen signed, simply, “Fulty.” She had been so distraught at not being able to hear Mass, to celebrate the Eucharist, to gather for prayer. It was Margaret’s reaction that served as catalyst, inspiring Dr. Borik to start the prayer group.

Another patient, Michelle, was not Catholic but learned to pray the Rosary in the group. “Being in this era of COVID limits us,” Michelle said in a video, “but it doesn’t limit our spirit and it doesn’t limit our beliefs…. Being in Oasis has increased my faith, has increased my love, has increased my happiness.” Michelle believed that her accident in February 2020 and the resultant injuries were a blessing, in that she found her way to the prayer meetings at Oasis, grew in faith and gained spiritual insights through the ministry of Dr. Borik.

Another patient reported that he’d been divorced nearly 50 years ago, and as a result felt estranged from the Church. When he heard that there was a Rosary group at Oasis, he decided to join. “It was an enjoyment to have something like that to go back to,” he said. “I remembered everything I was taught, from my First Communion all the way up to today.” He considered it a blessing that he’d been included in the Rosary group, and he hoped that it might be a blessing to other people, as well.

And one exciting development: Dr. Borik reported that one patient, who had been involved in a Pentecostal church, has now entered RCIA and is interested in coming into the Church at Easter time.

Here is a video of personal testimonies from members of the Rosary group: