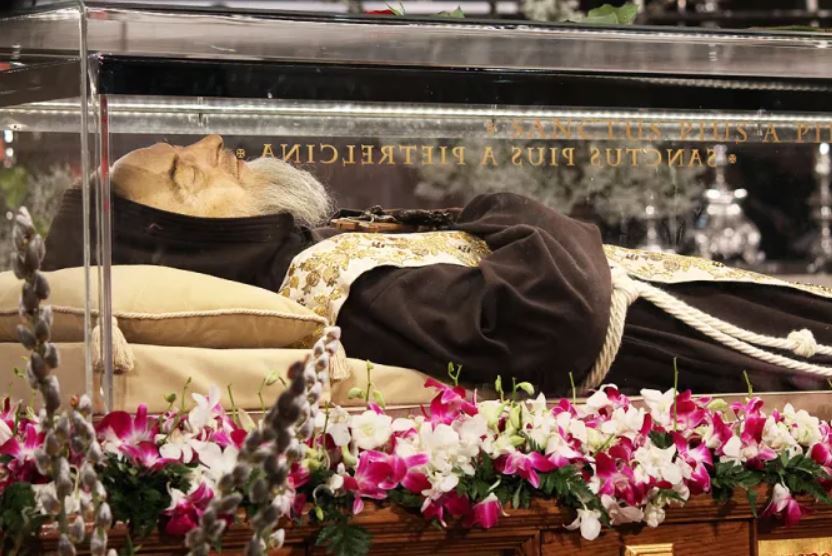 Early in his priesthood, Father John Paul Mary Zeller, MFVA, chaplain of EWTN, had an ‘irrational fear’ of Saint Pio of Pietrelcina, commonly known as Padre Pio. He had heard stories about Padre Pio being a “gruff saint” because of how he would interact with the penitent in the confessional, he said.

“I was scared to ask his intercession because you hear stories about him telling people in the sacrament of penance, ‘Get out of here, you’re not sorry,’” said Father John Paul. “I knew [my fear] wasn’t right. I wanted to come before him and ask the Lord to take away my fear.”

In April 2014, during the first year of his priesthood, Father John Paul traveled to San Giovanni Rotondo, where Padre Pio lived much of his life, to seek understanding of the saint of whom he was afraid.

“I wanted to have a devotion and love for this man who spent hours in the confessional as a Franciscan because I’m a Franciscan, that’s part of my charism,” he said.

Father John Paul was able to dine with the friars and learn about Padre Pio from people who knew many details of his story. He also visited many places that were relevant in Padre Pio’s life, including the room where Padre Pio offered Mass every day when he was censored from saying public Masses.

“I had the chance to offer Mass and do a holy hour by myself in that room, to sit in the exact chair and kneel in the exact kneeler where Padre Pio prayed,” said Father John Paul. “That was really something for me.”

As he learned more about Padre Pio, Father John Paul’s fear subsided and was replaced with a gentle admiration for the saint. He learned that one reason Padre Pio was rumored to be stern in the confessional was because he could actually “smell sin.”

“He knew if someone was holding back a particular sin,” Father John Paul said. “Many people came to see him because they heard of his stigmata and were curious, but they weren’t actually there for confession. He loved them enough to tell them to ‘come back when you are ready to repent.’”

Toward the end of Father John Paul’s stay in Italy, he felt inspired to ask one of the English translators for a relic of Padre Pio. The next day, much to his surprise, he had two relics, one larger piece of cloth that had touched Padre Pio’s stigmata in an ornate bronze reliquary, and the other a smaller piece of cloth with a blood stain on it.

Upon returning to the U.S., Father John Paul asked his superior if he could keep the smaller of the two relics with him to be able to pray with the people he encountered. His superior agreed.

“I felt like I wanted to share my experience of my own overcoming of the irrational fear I had of this saint, this man of God,” he said. “I knew deep down that I didn’t want it to sit on the shelf and collect dust. I knew that it was a gift—not for myself—it was meant for other people.”

Father John Paul began praying with the relic with other people, especially those who were suffering. He would also share some of Padre Pio’s story with the people he was praying with.

Some of the people Father John Paul prayed with have experienced healing. One woman who had a heart condition actually got worse after praying with the relic, but the worsened condition allowed doctors to identify and treat the problem. In another instance, a young girl who was suffering from a debilitating ear infection no longer had the infection after being prayed over with the relic.

Many people come to the Shrine of the Most Blessed Sacrament in Hanceville, Alabama, about an hour north of where EWTN is headquartered, Father John Paul said, with the intention of praying with him because he has the relic.

“I am certainly no miracle worker, I’m a priest,” said Father John Paul. “But I’ve seen how, not just with the Padre Pio relic, but with using relics of the saints, and praying with people, seeking intercession on their behalf, that favors have been granted.”

The favors might not come in the form of physical healings, Father John Paul said, but he has seen people grow in faith, understanding and love of God after praying with the relic.

“It’s beautiful to see people’s faith in God and trust in God, in seeking the intercession of the saints,” he said. “When we seek the intercession of a saint, we are really glorifying God. There’s a direct connection to God on earth through the person’s remains, whether that be through the person’s bones or in this case Padre Pio’s blood or a cloth that touched his stigmata.”

“The gift of having this relic of Padre Pio—it is not necessarily to impart miracles, but that people will be drawn closer to God, and that people grow in faith, hope and charity,” he said. “And for myself too, to open my own heart more and more to God in my own ministry of priesthood.”

Father John Paul said having the relic has made him more sensitive to the sufferings of other people. He often prays with the relic in the confessional when he senses that someone is having a hard time confessing their sins.

“’I’ll get the relic out of my pocket, and—they don’t know that I’m doing this—but I will bless them, I will just sit there making the sign of the cross until they get it out,” he said. “They don’t know it, but Padre Pio is interceding for them.”

Commissioned by Pope Francis in 2015 as a Missionary of Mercy, Father John Paul has a special mandate to be the face of mercy and bring people to Christ through the sacrament of reconciliation. Numbering a little over a thousand, the Missionaries of Mercy were commissioned to facilitate a human encounter with Christ, as living expressions of the Father’s love for us and the Father’s embrace in the sacrament of penance.

“I sense that Padre Pio is helping me and interceding for me as I sit and hear confessions,” he said. “The saints are meant to be our friends. That irrational fear that I had is not there anymore.”