Father Kapaun’s vigil and funeral Mass to be livestreamed 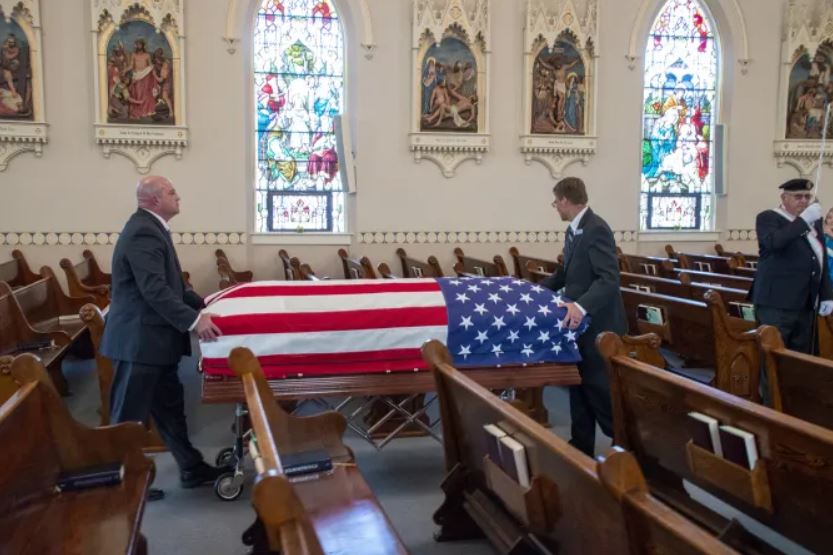 Father Kapaun’s vigil and funeral Mass to be livestreamed

A coffin containing the remains of Fr. Emil Kapaun is taken to the front of St. John Nepomucene Church in Pilsen, Kan., Sept. 25, 2021. / Chris Riggs/Diocese of Wichita

Father Kapaun died in a prison camp May 23, 1951 at 35 years of age. He was known for risking his life on the battlefield during the Korean War to minister to troops on the front lines. He was taken as a prisoner of war in November 1950 where he suffered from pneumonia and a blood clot in his leg. He continued to serve fellow prisoners until his death.

“When he was taken to that death camp he told one of his fellow POWs: ‘If I don’t make it back, tell the bishop that I died a happy death,’ said Father Wayne Schmidt, a retired priest of the Diocese of Wichita, during a send-off Mass for the remains of Father Kapaun at the Cathedral Basilica of Our Lady of Peace in Honolulu Sept. 23. “That can only come from a man of deep and committed faith, who believed that he lived to his last breath, in the presence of Christ in the world in which he was given.”

Father Kapaun’s remains were among 4,200 sets of remains returned to the United States in 1954 as part of the 1953 Korean Armistice Agreement. They were interred with a group of 866 other “unknowns” at the National Memorial Cemetery of the Pacific in Hawaii, where they remained until they were dug up in 2019 for identification.

His remains were identified in March 2021 and returned to his family at a ceremony at Pearl Harbor. Following the send-off Mass, Father Kapaun’s remains were flown to Pilsen, Kansas, where he was born.

On Sunday at St. John Nepomucene Church in Pilsen, Bishop Carl A. Kemme of Wichita said it was there that “young Emil Kapaun grew into the man God needed him to be, a man of virtue and values, hard work and determination.”

“It was his priesthood that was the foundation of his service to the soldiers he supported,” said Bishop Kemme. “He was Chaplain Fr. Kapaun and as a priest, he became a spiritual father to those men in a way that changed their lives.”

During Father Kapaun’s service as a military chaplain, he was awarded the Bronze Star for rescuing a wounded soldier despite heavy enemy fire. He was posthumously awarded the Legion of Merit and a Purple Heart, and in 2013 he was awarded the Medal of Honor by President Barack Obama. Obama referred to Kapaun as “a shepherd in combat boots” who had been regarded by his fellow soldiers as “a saint, a blessing from God.”

Father Kapaun’s cause for canonization was opened in June 2008. He had been named a Servant of God in 1993. Presently, the Congregation for Saints is reviewing his cause and Pope Francis may declare Kapaun “venerable.”

Watch This Video in Honor of Fathe...