From Bach to Biber Before Crossing the Tiber 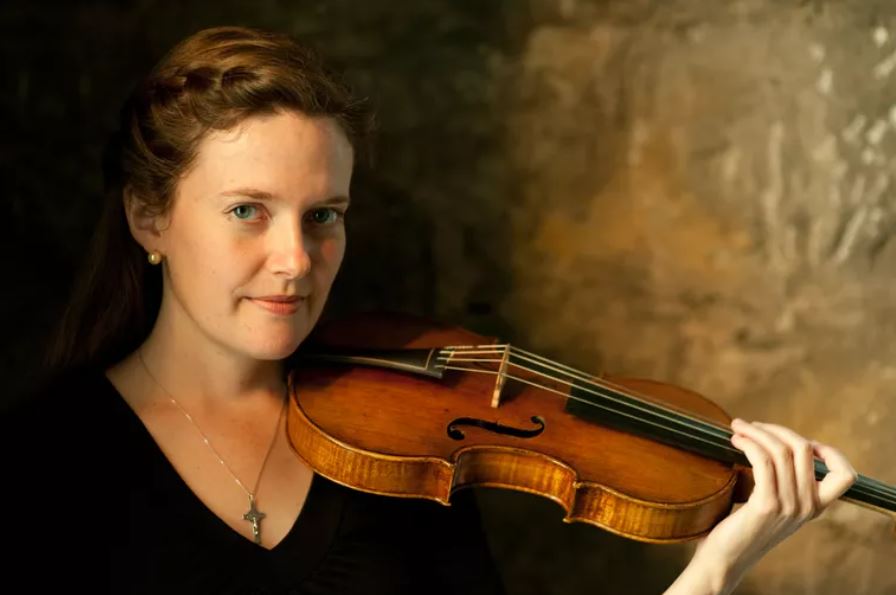 From Bach to Biber Before Crossing the Tiber

How one musician found her way into the Church.

“As a violinist specializing in historical performance, I was increasingly surrounded by sacred music: hymns and Masses and cantatas and the great composers and priests who wrote them. This served to strengthen my faith in general and drew me steadily towards the Roman Catholic Church.”

Fiona Hughes was received into the Church in 2017.

From her home in Virginia, she spoke to the Register March 26 about music, faith and the life of a professional musician during a pandemic.

What Hughes terms her “small ‘v’ vocation as a musician” is something she feels “called to do primarily because of Catholicism.” As it turns out, her professional calling has played its part in a deeper one. “Over 10 years working in Baroque repertoire,” she explains, “being aware of Renaissance and Medieval and Classical eras, I started to observe again and again how unassuming the Church seems to be about its own musical treasures yet how clearly the creative ideas historically originate there.” She then cites a non-Catholic example, Johann Sebastian Bach, who was Lutheran, but whom she says “was so clearly influenced by what came out of the Catholic countries Italy and France … [that] … the great work which was the focus of his last years was specifically Roman rather than Lutheran, the Mass in B Minor.” She has his work is “one of many examples of the cultural wellspring, the seemingly endless source of creativity at the heart of Catholicism which influences and inspires those attending to it.”

Intriguingly, Hughes sees even clearer links between prayer and her performances on stage. She suggests, for example, that the Rosary Sonatas for violin by Heinrich Biber (1644-1704) are “for a Baroque violinist an example of music for prayer.” She says that these musical meditations, inspired by the Rosary, are possibly intended to complement a Rosary procession and thus “require a meditative focus on the part of the performer.” She has found that the meaning of the sonatas for her is better understood when she watches another violinist perform them, as this allows Hughes to concentrate on the spiritual meaning of the piece rather than “being distracted by technical concerns.”

“The sonata for the carrying of the cross,” continues Hughes, “has a passage of sustained slow notes which creates a feeling of strain felt by the violinist’s bow arm muscles, expressing the weight of the wood of the cross. The ‘falls’ of Jesus familiar in the Stations of the Cross are also perceptible in the music. And, of course, visually there’s the crossed bow and strings. Some of the sonatas are more straightforward in ‘painting the scene’ than others, but they all enter into the mystery via sound world imaginativeness.”

Fiona Hughes was born in 1986 and spent her childhood in the Enchanted Circle area of northern New Mexico. She now realizes that even as a child the Catholicism of the region was somehow attracting her. For example, while still young she remembers seeing an image of Our Lady of Guadalupe on a t-shirt and then asking her mother if she might have one similar, before being gently discouraged from this by her Protestant parents. In 1998, she moved with her family to central Virginia, where she still lives in the Shenandoah Valley. As a child her parents encouraged her to “follow God wherever he leads.” This led, initially, to 10 years in an Anglican church (Anglican Province of America), where she says she “learned to love the historic church and the depth of its liturgical traditions.” Then she began reading the works of St. John Henry Newman. Then she “was caught off guard by the beauty and mystery of the Latin Mass”; eventually, she found herself praying her first Rosary “in fear and trembling.”

Subsequently, she was instructed by the Dominicans of St. Thomas Aquinas parish in Charlottesville, Virginia; where she was received into the Church during the Easter vigil 2017. She remembers that night well. “At the time, I was focused on the sacraments I was about to receive, especially the Eucharist.” She recalls “trying not to be distracted from it by thinking about the music. But the Exsultet  (Easter Proclamation) I had never heard before, and no one warned me it was coming.

“‘This is the night …’ I have never been so stunned in all my life by the power of a performance of music as I was at that moment in the liturgy … something I hope to always remember.”

Since her conversion, her parish home is St. Francis of Assisi in Staunton, Virginia, while also regularly attending the Latin Mass at Holy Comforter parish in Charlottesville.

From an early age she wanted to be a musician. The first time she heard a Baroque violin it sent shivers down her spine. She went on to be awarded degrees from Oberlin Conservatory (master of music in historical performance for which she studied with Marilyn McDonald) and the Cleveland Institute of Music (bachelor of music in violin performance, where she studied with Stephen Rose).

Hughes cites her principal musical influences as J.S. Bach, Claudio Monteverdi, John Dowland and Henry Purcell. Her period bows are by David Hawthorne, and her violin is by Claude Pierray (died 1720) and was once owned by Henri Vieuxtemps (1820-1881), composer and violinist of the Franco-Belgian school of violin playing.

In 2011, along with Baroque violinist David McCormick and recorder player Anne Timberlake, Hughes founded Three Notch’d Road: The Virginia Baroque Ensemble, as she felt that central Virginia needed an early-music ensemble to present a full season of music on period instruments. “We started small and quickly found active and generous supporters,” she says. “Our usual ensemble consists of voices and historically accurate string, keyboard and wind instruments. We’ve performed diverse sets of early music involving unusual instrumentation: Latin American with historical percussion, Baroque music of Poland with bagpipe and sackbut, and hymnody of early America with gourd banjo, cittern and harp.” The ensemble has released two albums to date, with a third, Shining Shore: Early Music of Virginia due out later this year.

Hughes is the current artistic director for the ensemble. In that role she seeks to focus on early music so as “to connect listeners with the culture of the past: with the ideas and emotions and values presented in the music.”

Link Between Faith and Music

Hughes sees a clear link between her faith and the music she performs. “What we listen to, and how we listen, affects our mind and emotions,” she observes, “and thus, from a Christian perspective, can influence the health of our soul and a right worship of God. It is important to respond to God with fitting emotion (such as sorrow on Good Friday and triumph on Easter Sunday), and to engage the intellect by music expressing the order of creation.” In regard to her musical specialism, she says she has “yet to encounter another musical era that articulates this balance of mind and heart as well as the Baroque,” before adding, “Music bypasses the intellect. Today, studies show us how rhythm, harmony and melody affect our bodies: our brain waves, heart rate and breathing. In the past, people were aware of this without needing to measure it by scientific means: The doctrine of affections is familiar to those who study Baroque music.”

Hughes offers an interesting insight into an unexpected Catholic musical renaissance underway. “It has been interesting how the religious exemption to shutting down events in many areas of the U.S.A. [during the pandemic] has shone a spotlight on the Catholic Mass as the only place in which musical performance is happening. The National Shrine in Washington, D.C., for instance, has continued employing excellent vocalists for their Masses. There are some music lovers watching the livestream who aren’t even Catholic but are engaging in the beauty of the Catholic liturgy through [it being] ‘the only game in town’ these days.”

‘Music Can Be a Source of Hope’

During this time of pandemic, live performances with an audience have ceased, having a dramatic effect on the performing arts and the livelihoods of many working in that sector. In particular, many musicians have been left without a performing platform or forced to do so online. Although Hughes understands that professional performers are grateful for the various opportunities to make music in front of video cameras as a means of still making music for those accessing it on computer screens, she feels “there is no real substitute for live performance.” She describes these virtual concerts as an impoverished substitute for live music. “I noticed right away that livestream ‘concerts’ — prerecorded or not — lack something musically,” she says. “This is true of other musicians’ performances as well as my own. The presence of listening human beings, who are breathing the same air and being affected by the same sound waves, has a power to inspire and energize musicians. That, thanks to the pandemic shutdown, is clearer than ever.”

So how tough has this recent time been for her? “I am fortunate to live in a small city with a network of community support,” she replies, “so it was easy last year to transition [from performance] to teaching. But for performers there has been an aspect of existential crisis, which is a kind of mental suffering all of us are going through, to some extent. The West places such importance on physical health — in that things pertaining to the body are ‘essential’ but things pertaining to the soul are deemed ‘inessential’; and, in particular, musical performance is considered just ‘entertainment.’” She added, however, that, amid “pandemic, being a time of fear and despair, music can be a source of hope, and I would argue it is spiritually essential.”