From the Nineveh Plain: Iraqi Christians Focus on Light in the Darkness 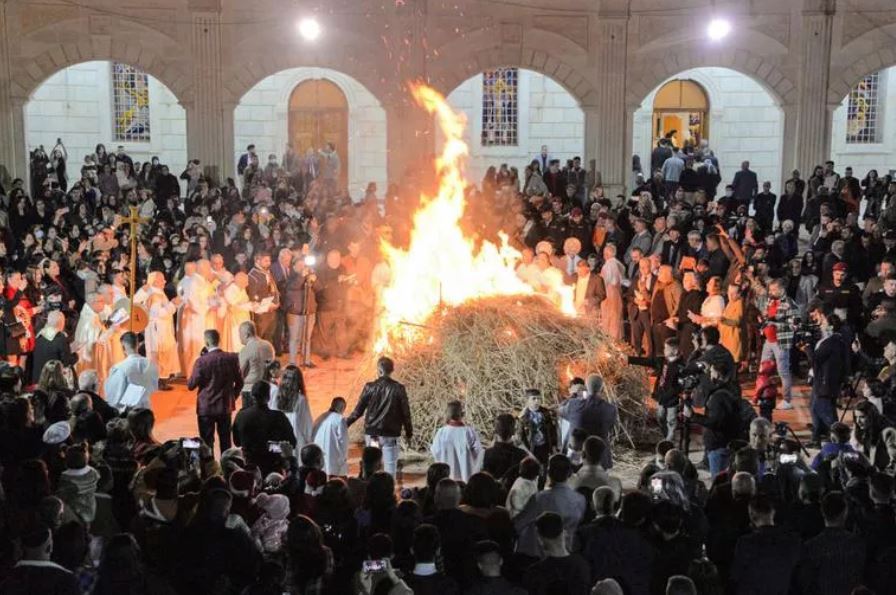 From the Nineveh Plain: Iraqi Christians Focus on Light in the Darkness

COMMENTARY: One beautiful sign of hope is the opening of a new church in Erbil, where the first Masses were to be celebrated at Christmas.

Seven years ago, when I first flew into Erbil, the capital of Iraqi Kurdistan, thousands of Christians were living in camps, abandoned buildings and Church properties. They had fled their ancient homeland on the Nineveh Plain, where Jonah the Prophet had preached; his tomb in Mosul, present day Nineveh, had been blown up by ISIS.

Founded by disciples of the Apostle St. Thomas, the Church in this land, since the arrival of Islam, had endured varying degrees of persecution over the centuries; the idea that the violence of the Islamic State was something unusual is a product of malformed western education rather than historical fact.

Returning just last week, for my eighth visit since 2015, I found no Christians left in any refugee camps in Iraq, sadly not the case for the Yazidi religious minority, which is so violently persecuted by ISIS. While many Christians have remained in Erbil, seeking the relative safety and potential job opportunities in Kurdistan, around 50% of those displaced have returned to the principal Christian towns in Nineveh.

Many, though, have left the country over the years, as the Caliphate was defeated and they returned to discover their homes destroyed and security and labor precarious. Contrary to recent reporting, the West, in particular the United States and Great Britain, was not welcoming to victims of ISIS’ campaign of genocide, like the Christians and Yazidis; this is not a partisan point, both the Obama and Trump administrations took in a very small number of Christians.

For many in the think-tank bubble of Washington D.C., Iraq is old news, in fact it is no news. Some have moved on to the latest crisis, imagining that life for the Christians in Iraq is secure, others have cynically declared that there is no future for Iraqi Christians because their numbers have shrunk so much, so it is not worth attempting to help. This attitude, which I discussed with bishops, priests and laity, is causing immense pain and some anger.

While it is true that, at the moment, Christians are not being killed for their faith in Iraq, persecution is now, according to Archbishop Bashar Warda, the Chaldean Catholic archbishop of Erbil, a “systematic persecution,” or, in the words of another priest on the Nineveh Plain, a “silent persecution.”

Archbishop Warda described life for Christians as “second or third class citizens,” with no rights under the Iraqi constitution. He also warned that, in times of political instability in Iraq, like the present chaos following the contested elections, it is always the religious minorities, particularly Christians and Yazidis, who suffer.

The particular danger for Christians on the Nineveh Plain is the growing presence of the Shiite militias, under the control of Iran. The entire Nineveh area is described as the “disputed territories,” with both the Iraqi government and the Kurdish authorities claiming the right to control the area.

Now, in a very worrying development, even the nominally Christian militia has come under the direct command and control of the Iranian-run militias. Christians feel both demographic and economic pressure — even the main street in the town of Bartella, which had been a majority Christian town before 2014, has had its main street renamed for the “martyrs” of the Shiite militia, a curious similarity with the current attempt in the West to change history by removing and renaming the heritage of a place.

Recent national elections are regarded as fraudulent by the Christians in particular, with one priest calling Iraq now a “colony of Iran.” As I questioned many of the people I had got to know well over the years, another feature of their sadness and frustration was the lack of interest by the Church in the West.

Yet despite the struggles and dangers, there are signs of hope for the future, and positive developments, which mean that Christians in Iraq will not become a museum exhibit for religious tourists to come and view. Even though the number of Christians is greatly diminished, there is now a core group, including many young people, who want to stay and make a future in their native land.

One beautiful sign of that future is the opening of a new Church in the Christian quarter of Erbil. Archbishop Warda took me to see the final work on the imposing building, dedicated to St. Thomas. Despite not yet having pews or a fixed altar, the first Masses were to be celebrated at Christmas.

One cannot fail to be impressed that, as churches are closed in the West and congregations shrink, in a place where Christianity was violently persecuted, a new church is opening. It is not trite to be reminded of the ancient saying of Tertullian, that the “blood of the martyrs is the seed of the Church.”

That seed is also seen in the new Catholic University in Erbil. I saw it being built just a couple of years ago, now it has many students, including a large number of young women, studying a number of different subjects. As Archbishop Warda said to me, for Iraqi Christians to have a future, apart from security and equal rights, they need education and jobs.

Employment was the last reason that I left Iraq this time, more hopeful than when I arrived. I was able to visit a number of the small family businesses that nasarean.org has helped to start, including a coffee shop in Bartella, and a clothing store in Qaraqosh. With jobs people will stay because they see a future for their families, they have the dignity of not living on charity, and, critically, they want to work. Every business that we have supported over the last few years is doing well.

Despite many challenges Iraqi Christians want us in the West to do three things for them: Continue to pray for them, to help them to help themselves, and never to forget them, because the Middle East is where Christianity was born at Christmas.

A look at Catholic newsmakers of 2...

Women of Valor and the Pro-Life Ca...