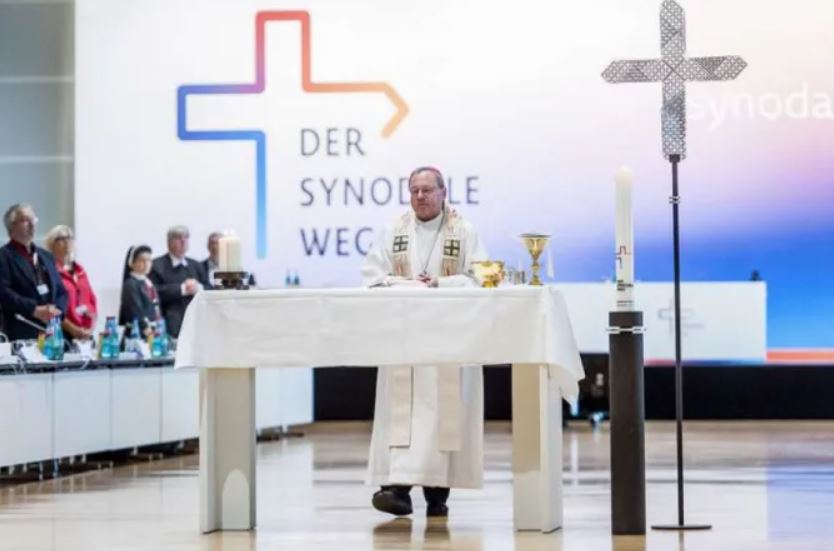 The German Catholic Church’s “Synodal Way” will be extended to 2023 after its plenary session ended abruptly on Saturday following votes in favor of a text endorsing same-sex blessings and a discussion of whether the priesthood is necessary.

The synodal assembly is the supreme decision-making body of the Synodal Way, a multi-year process bringing together bishops and lay people to discuss four main topics: the way power is exercised in the Church; sexual morality; the priesthood; and the role of women.

The Synodal Way, launched on Dec. 1, 2019, was originally expected to end in October 2021, but was extended to February 2022 due to the pandemic. The latest extension means that the controversial process will last more than three years.

The Church in Germany is facing an exodus of Catholics in the wake of a clerical abuse crisis. More than 220,000 people formally left the Church in 2020. Only 5.9% of Germany’s Catholics attended Mass last year, compared to 9.1% in 2019.

The synodal assembly ended earlier than expected on Saturday afternoon after Bätzing asked organizers to count whether the meeting had a quorum of 154 participants after many departed early.

They determined that there were only 149 participants, five short of the two-thirds majority required to have a quorum.

CNA Deutsch reported that the decision to suspend deliberations was met with disbelief among participants in the assembly, which was beset by technical problems.

Speaking at the closing press conference, Bätzing said he regarded the sudden ending as a “teachable moment” that he hoped would sharpen participants’ awareness that the Synodal Way was entering an “important phase.”

The synodal assembly consists of 230 participants, including the German bishops, 69 members of the Zdk, and representatives of other parts of the Church in Germany.

During the three-day meeting, they discussed 12 of the 16 texts from the four synodal forums, as well as two foundational documents: a preamble and a theological orientation text.

On Oct. 1, 168 participants out of a total of 214 voted in favor of a document challenging traditional Church teaching on sexual morality following its first reading.

Synodal Forum IV’s text on “Living in successful relationships” calls for the development of blessings for same-sex couples.

CNA Deutsch reported that the forum’s chairman Bishop Helmut Dieser of Aachen argued that the evaluation of sexuality should in future begin “from the person,” rather than natural law.

The Vatican’s Congregation for the Doctrine of the Faith (CDF) declared in March that the Church does not “have the power to give the blessing to unions of persons of the same sex,” outlining its reasoning in an explanatory note and accompanying commentary.

The Vatican statement, issued with the approval of Pope Francis, sparked protests in the German-speaking Catholic world. Several bishops expressed support for blessings of same-sex couples, while churches displayed LGBT pride flags, and a group of more than 200 theology professors signed a statement criticizing the Vatican.

Priests and pastoral workers in Germany held a day of protest in May during which they conducted blessing ceremonies attended by same-sex couples.

On Sept. 30, the synodal assembly’s opening day, participants voted by a narrow majority of 95 to 94 to discuss “the question of whether the priesthood is needed at all,” CNA Deutsch reported.

But at the closing press conference, Bätzing criticized media reports suggesting that the Synodal Way would be debating the “abolition” of the priesthood.

“No one can say that the German Church is going to do away with the priesthood. That is not true,” he insisted, arguing that the vote instead gave the synodal forum on priesthood a mandate to “positively recall the reasoning once again why and where the position of the priestly ministry is in the midst of God’s people.”

While the synodal assembly voted to discuss the necessity of the priesthood, the Synodal Way’s complex procedures mean it is unclear whether there will be an official debate on the topic.

In the run-up to the Synodal Way, the German bishops’ conference clashed with the Vatican after it initially suggested that the process would end with a series of “binding” votes — raising concerns in Rome that the resolutions might challenge Church teaching and discipline.

CNA Deutsch noted that Germany’s bishops will be under no obligation to implement the Synodal Way’s resolutions in their dioceses.

It added that it remained uncertain how Pope Francis and the Vatican would respond to direct challenges to Church teaching.

Pope Francis addressed concerns about the Synodal Way in an interview with the Spanish radio station COPE aired on Sept. 1.

Asked if the initiative gave him sleepless nights, the pope recalled that he wrote an extensive letter that expressed “everything I feel about the German synod.”

Responding to the interviewer’s comment that the Church had faced comparable challenges in the past, he said: “Yes, but I wouldn’t get too tragic either. There is no ill will in many bishops with whom I spoke.”

“It is a pastoral desire, but one that perhaps does not take into account some things that I explain in the letter that need to be taken into account.”

Bätzing said that the documents discussed at the synodal assembly were “not just texts, but dreams put into words of how we want to change the Church in Germany: a Church that is participatory, gender-equitable and journeying together with the people.”

“Here we have shown that we listen to each other in calm work and in good and objective debate. Here in Frankfurt, texts have been improved. Now the forums have the task of further developing the templates so that they will be ready for adoption next time,” he explained.

“The forums have the mandates to keep working. We are waiting for the content to be brought to the third synodal assembly and we suspect we still need a good bit of time,” he added.

8 Powerful Ways to Combat the Grav...