Górecki’s Symphony No. 3 and the Mother of Sorrows 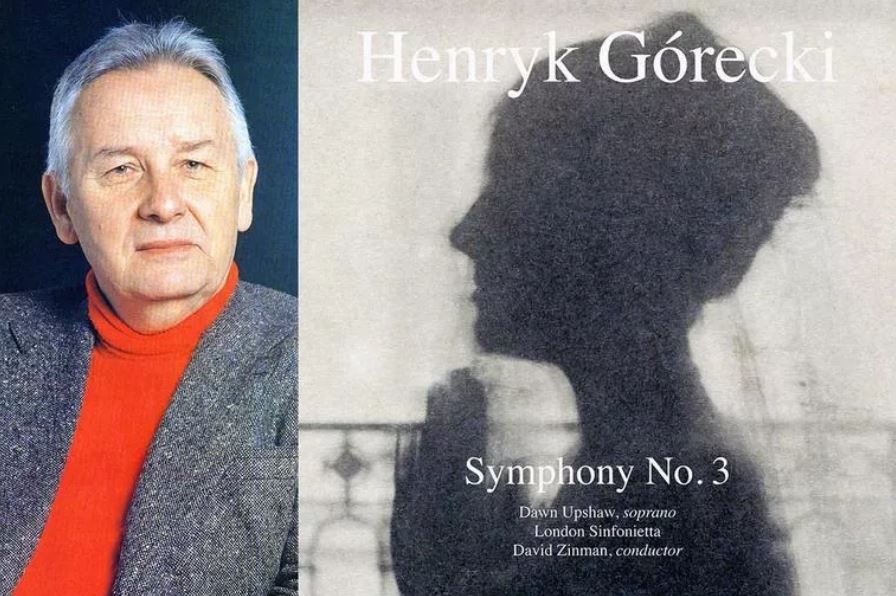 Górecki’s Symphony No. 3 and the Mother of Sorrows

Henryk Górecki in 1993 (left) and the Elektra-Nonesuch album cover from his Symphony No. 3 (photo: Wikimedia Commons)

Why did the Symphony No. 3 strike such a chord in 1992? Perhaps the reason is to do with the words that inspired the music.

Forty years ago, in May 1991, a symphony was being recorded at a sound studio in northwest London — Symphony No. 3 by Polish composer Henryk Górecki.

An obscure work, first composed in 1970s communist Poland, Symphony No. 3 was the work of a composer virtually unknown in the West. Although appreciated by a niche audience, Górecki’s music in general, and his Symphony No. 3 in particular, was little known beyond his native Poland. Nevertheless, the record label Elektra-Nonesuch had decided to make a recording of the symphony, even though by 1991 there were at least three other recordings of the work in existence — none of which had made an impact upon the global listening audience. This was to soon change, however.

In the end, for Elektra-Nonesuch the recording of Symphony No. 3 proved costly. Featuring the combined talents of conductor David Zinman, soprano Dawn Upshaw and the London Sinfonietta, it was estimated that the resulting disc would need to sell around 15,000 units just to recoup costs incurred by the record company. In the world of classical music, if global sales for a disc were in the region of 5,000 units it was deemed a great success.

In the end, the gamble paid off. Within two years of its 1992 release, the Elektra-Nonesuch recording of Górecki’s Symphony No. 3 had sold around 700,000 units, and had topped both classical and mainstream record sales charts around the world. To date, the recording has sold in excess of one million units. Some have even suggested that it is the best-selling classical musical album of all time.

No one was more surprised by this unexpected occurrence than the composer himself. “Perhaps people find something they need in this piece of music,” pondered Górecki. “Somehow I hit the right note; something they were missing. Something, somewhere, had been lost to them. I feel that I instinctively knew what they needed.”

So who was Górecki? And why did his Symphony No. 3, a piece of music that had been publicly performed to little notice since its composition in the mid-1970s, suddenly find an audience and a reception beyond the wildest dreams of both music label and composer?

Born in 1933, Górecki grew up in modest circumstances in a Silesian village. His mother died when he was just two years old. From an early age, he showed an interest in music. In due course, he enrolled at the State Higher School of Music in Katowice where he was a student between 1955 and 1960. Later, in 1965, he joined the faculty there. By 1979 he had become provost, only to find that his colleagues began to ostracize him.

In 1978, the composer felt the cold chill of communist indignation still more when he accepted a commission for a work that would become his opus 38, Beatus Vir (Blessed is the man [Psalm 1]) – from the then Archbishop of Cracow, Cardinal Wojtyła. It was a piece of music commissioned to honor the 900th anniversary of the martyrdom of Bishop (later Saint) Stanislaus in 1079. Subsequently, when Cardinal Wojtyła became Poland’s first pope and the Polish government refused to let the newly elected Pope, John Paul II, visit Katowice, Górecki resigned his post as Provost in protest. Thereafter, he formed the Catholic Intellectuals Club to oppose the Polish communist Party.

But the Papal visit to Poland did take place in June 1979. Just over a year after, images flashed around the world of Lech Wałesa at the Gdańsk Shipyard where an icon of Our Lady of Czestochowa adorned the yard’s gates, as workers rose up to challenge the communist state. Despite further state repression and the imposition of martial law from the end of 1981 to the summer of 1983 the Polish People’s Republic began to fall apart.

In 1987, for the third visit of Pope John Paul II to his native Poland, Górecki was to compose Totus Tuus. This work was dedicated to the Pope but it was also a meditation on the pontiff’s deep Marian devotion as expressed in his papal motto: Totus Tuus (Totally Yours).

Two years later, Poland was free of its communist shackles.

To some extent, one could argue Górecki’s musical journey mirrored aspects of that of the Polish nation. His early compositions were avant-gardeand modernist, wholly in keeping with the then intellectual current encouraged by the forward-facing socialists in charge of Poland. By the mid-1970s, however, all that had changed for Górecki. As Poles increasingly and publicly rejected the new social order of Poland’s communists, Górecki began composing in a more traditional style, with the human voice, tellingly, more to the fore throughout his work. Inevitably, his official commissions from the communist state dried up; and his official reputation started to plummet.

It was around this time, in 1976, Górecki composed the three movements of his Symphony No. 3, Op. 36, also known as the Symphony of Sorrowful Songs (in Polish: Symfonia pieśni żałosnych).

First performed in France in 1977, Symphony No. 3 continued to be performed at festivals throughout the 1980s; a performance was broadcast on BBC Radio at the end of 1987, before receiving its first British concert performance the following year. But it was not until the 1992 disc release that the world finally began to “hear” the music of Górecki.

Which again raises the question: Why did the Symphony No. 3 strike such a chord in 1992? Perhaps the reason is to do with the words that inspired the music.

The one theme that runs through all the work’s movements is that of motherhood. The first movement voices words from the 15th century of the Sorrowful Mother’s lament as she gazes upon her Son hanging upon the Cross; the second movement expresses an urgent plea for protection to the Virgin – based upon words found etched by a prisoner on a Gestapo cell wall in 1944; while the third movement is a maternal lament for a dead son.

Some critics have commented that the work’s maternal theme arises naturally from the fact that Górecki lost his mother while still young. That elemental emotional break in the composer’s life no doubt informs the work — the symphony is dedicated to the composer’s mother. But then, for the man who composed Totus Tuus, present also is the equally elemental connection to the heavenly Mother of all believers.

At the start of the 1990s, through the music of Górecki the world was introduced, in words and music, to a powerful meditation upon motherhood in general and in particular on the maternity of the Blessed Virgin. Symphony No. 3 places this latter maternity in the context of suffering, the suffering both of Our Lady and also of her scattered children.

One wonders if it was mere coincidence that Symphony No. 3’s breakthrough recording took place in May — the month traditionally dedicated to Our Lady.

Was it coincidence, too, that Górecki grew up in the shadow of a place synonymous with suffering, namely, Auschwitz concentration camp, which is a short distance from his childhood home?

It is, perhaps, this combination of motherhood and suffering, expressed in both music and in word, which speaks to audiences in Symphony No. 3. In a world that attacks motherhood in different ways and seems to have no answer or means of understanding suffering, Symphony No. 3 points us to another reality — namely, that of the Mother of Sorrows who helps her children to see him who not only transfigures suffering but who definitively gives suffering redemptive power.