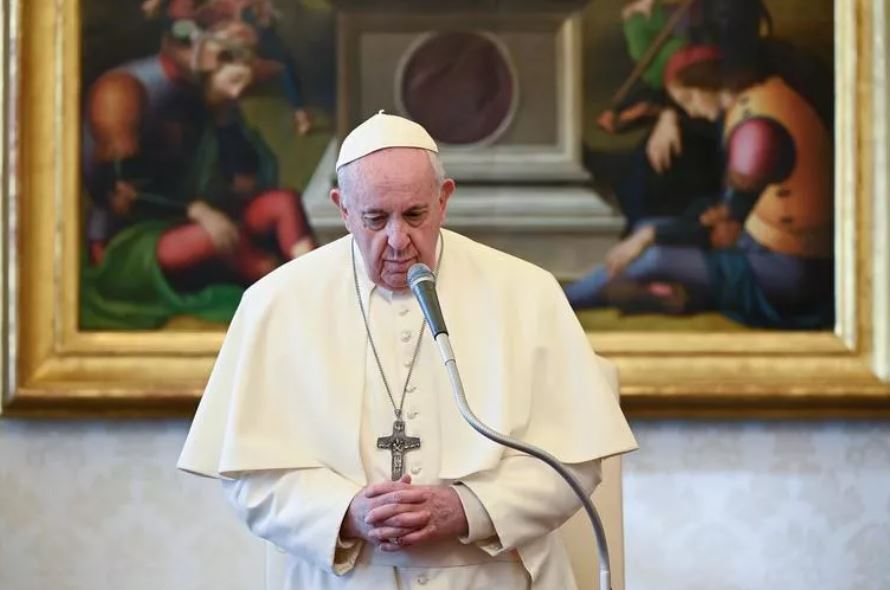 Like the plan’s promoters, the Holy Father also believes the global economy needs to be reshaped coming out of the pandemic; but unlike them, his vision is anchored in God’s grace.

VATICAN CITY — Since it first came to public attention in June 2020, much discussion has surrounded the “Great Reset” — a global vision pushed by the World Economic Forum (WEF) and supported by various world leaders to rebuild a society after COVID based on greater solidarity and a more sustainable economy.

Prominent backers include President Joe Biden, Canadian Prime Minister Justin Trudeau, German Chancellor Angela Merkel and Britain’s Prince Charles. Each see it as a blueprint for “resetting capitalism,” a chance to “build back better” after the global pandemic, and to set the world on a more environmentally friendly and sustainable path for which there is “no alternative.”

But many others have criticized the Great Reset’s ambitions, including Brazil’s minister of foreign affairs, Ernesto Araujo, who outright rejected it, saying that “totalitarian social control is not the remedy for any crisis,” and the progressive author Naomi Klein, who is concerned it creates an “insidious” and “false impression” that global elites are serious about tackling the issues the Global Reset raises. In the Church, Cardinal Raymond Burke has called it a manipulative attack on freedom and the family.

More generally, critics see it is a flawed and dangerous agenda that paves the way for an autocratic global future more closely resembling the communist-capitalist system of an increasingly dominant China.

The Great Reset is the brainchild of professor Klaus Schwab, a German economist and founder of the WEF, an annual gathering of high-level business and political leaders that since 1971 has usually met in Davos, Switzerland.

According to the Great Reset’s website, the project harbors a vision of the coronavirus crisis as having exposed “inconsistencies, inadequacies and contradictions” in social systems, but also providing a “unique window of opportunity” to shape the world. Specifically, the Great Reset advertises itself as an initiative to “build a new social contract that honors the dignity of every human being.”

To achieve that new social contract, the Great Reset’s architects argue that the world “must act jointly and swiftly to revamp all aspects of our societies and economies, from education to social contracts and working conditions.”

Schwab himself sees the predominant Western-based economic system, heavily laden with enormous debt estimated to be $277 trillion, as “not fit anymore for the 21st century” and in need of reform. The world, he believes, is entering what he calls a “Fourth Industrial Revolution” — a new era of paradigm change driven by technological breakthroughs such as artificial intelligence, quantum computing and robotics — and needs to adapt accordingly.

“With the economic emergency responses to the pandemic now in place, the opportunity can be seized to make the kind of institutional changes and policy choices that will put economies on a new path towards a fairer, greener future,” Schwab writes in his 2020 book The Great Reset, co-authored by French economist Thierry Malleret. “Every country, from the United States to China, must participate, and every industry, from oil and gas to tech, must be transformed.”

The Register contacted the World Economic Forum several times for comment on the Great Reset initiative but received no response.

The theme of a “great reset” is not exclusive to the World Economic Forum. Others have called for some form of communitarian reset of values and institutions, including Pope Francis, who sees the pandemic as exposing capitalism’s flaws.

Having overseen his own hotly debated reset of the Church over the past eight years, the Pope has begun a number of initiatives along some of the same lines as Schwab.

He has frequently expressed a wish for the world to take the opportunity to emerge better from the COVID crisis, including through his October 2020 social encyclical Fratelli Tutti (which the WEF read as proposing a reset similar to its own), his “Economy of Francesco” initiative in Assisi in November that proposed a “new economy” of “communal wealth,” his U.N.-affiliated Global Compact for Education initiative, or the Vatican’s collaboration with Mission 4.7, a U.N.-backed project that, like the Global Compact, aims to educate the world in sustainable lifestyles, gender equality and a culture of peace and nonviolence.

Also relevant to his vision for resetting the world’s socioeconomic systems is Francis’ new interview book with papal biographer Austen Ivereigh. Called Let Us Dream: The Path to a Better Future, an excerpt of which was published in The New York Times, Francis’ vision overlaps substantially with the Great Reset. “For me it’s clear,” Francis writes. “We must redesign the economy so that it can offer every person access to a dignified existence while protecting and regenerating the natural world.”

Cardinal Peter Turkson, prefect of the Dicastery for Integral Human Development, sees other significant commonalities between the goals of the initiative and those of Pope Francis, and he also pointed to Francis’ decision last year to create a commission to reflect on a new, post-pandemic “socio-economic-cultural future” and propose “relevant approaches.” “The Vatican COVID-19 Commission,” with its slogan “Prepare the Future,” is led and run by the cardinal’s dicastery.

Cardinal Turkson told the Register Jan. 28 that the Vatican wishes to be “open” to such initiatives as the Great Reset, adding that such openness and engagement has its origins in the Second Vatican Council’s call to be a “witness” and show “solidarity with humanity,” he said. “The objective for us and from the point of view of Pope Francis is to reimagine a social order with more justice, equity, where social injustices are overcome,” he said. This is why, he explained, his dicastery has “shared a lot of information with Davos, the U.N., about our approach,” making it “very likely” that language of the Vatican and the WEF “now begins to be closer.”

Cardinal Gerhard Müller, prefect emeritus of the Congregation for the Doctrine of the Faith, said he welcomes economists and politicians meeting to discuss the world economy, as the economy must benefit everyone and not a select few. But he wonders what “image of humanity” is held by WEF members and those of other similar select groups. As for the initiatives such as the Great Reset, he takes a decidedly jaundiced view.

Without directly referring to the initiative, he told the Register Jan. 29 that two sides — “profiteering capitalism, big-tech giants of Western countries” and the “communism of the People’s Republic of China” — are today “converging and merging into a unified capital-socialism,” producing a “new colonialism” that the Pope has “often warned against.”

The goal, Cardinal Müller believes, “is absolute control of thought, speech and action.”

“The homogenized man can be steered more easily,” he added. “The Orwellian world of homo digitalis has begun. Through mainstreaming, total conformity of the consciousness of the masses is to be achieved via the media.” And he recalled the 19th-century French polymath Gustave Le Bon who predicted such a situation in his book The Psychology of Crowds.

Renato Cristin, professor of philosophical hermeneutics at the University of Trieste, Italy, noted that “the problem of conscience” has no mention in Schwab’s book and that, by “subtracting elements of capitalism,” it introduces “principles of another kind: socialist above all, and therefore statist.”

In its rejection of capitalism, the Great Reset has perhaps its greatest commonality with the vision of Pope Francis, according to Cristin, who describes the Pope as being generally sympathetic to initiatives that are “hostile to the capitalist system.”

This hasn’t gone unnoticed by the World Economic Forum. An article on its website praised the Pope for his clear refutation in Fratelli Tutti of neoliberalism — today’s market-oriented competitive economic system that aims to eliminate price controls, deregulate capital markets, lower trade barriers and reduce state influence in the economy. The Great Reset similarly rejects it.

In other areas, Cristin believes Schwab’s book “lacks certainties and clear ideas” on which to build the future, a symptom of what he calls a “disorientation” and “mark of chaos” that afflicts the Western world today. It produces a “nihilistic secularism,” he believes, and “paves the way for a de-Christianized society” as well as “negative forces like Islamism.”

Rather than follow such initiatives, which he describes as theological-political visions linked to liberation theology, he believes the Church should apply the social doctrine of the Church “in its original and authentic formulation given by Pope Leo XIII in his encyclical Rerum Novarum and by Pope John Paul II in his encyclicals Laborem Exercens and Centesimus Annus.” The world, he said, needs “well-founded, solid, clear and effective” theories “that refer to the great values of the Western tradition” and which “really bring order to the world.”

But perhaps the most significant danger of the Great Reset initiative is its utopian-atheistic vision, according to some critics. Schwab and Malleret, for instance, never once mention God or religion in their book, or leave any room for the transcendent.

History teaches that such omissions are not good omens, Cardinal Müller noted. Whenever man wanted “to recreate and redeem himself,” he recalled, a monster has been created instead, citing as an example the “gruesome human experiment” of the communist Soviet Union that coincided with the industrial revolution.

“That should have convinced us,” he said, “that the utopia of a paradise on earth in any form results in the greatest crimes against humanity (denial of dissenters’ freedom, destruction of labor, population reduction by abortion and euthanasia). Man’s nature, wounded by sin, needs divine forgiveness. Only God’s grace can redeem us and give us the ‘freedom and glory of the children of God.’”

Cardinal Turkson said that although the WEF and Pope Francis are both “talking about resetting the future” and see the present system as “flawed,” the Pope is approaching it “rooted in the Scriptures, rooted in the grace of God, in Christ,” but without imposing it. For this reason, Cardinal Turkson recognizes a potential conflict with the Great Reset’s protagonists.

“When we open ourselves to the grace of God, we’re able to transcend, go beyond ourselves,” he said. “That’s the radical difference with their approach.”

As for the notion that the Great Reset is about establishing a new world order controlled by the elites, Cardinal Turkson blamed such theories on internet sites and a conspiracy theory that “used to be attributed to the Illuminati” — a Bavarian secret society founded in 1776 and similar to the Freemasons.

Cristin also preferred not to speak of a “plot,” only a “struggle for power” to build a “new world order.” But if such a new order ever comes to fruition, “it will be a further contribution to global chaos,” he predicted.

Cardinal Müller expressed sympathy for those sounding the alarm about the Great Reset and recalled that totalitarian systems “have always denigrated any criticism as conspiracy and subversion.”

The many warnings of totalitarian rule in the 20th century “can hardly be discredited as conspiracy theories, since real political developments have proven them right,” the German cardinal said. “Blind trust in the philanthropic attitude of the leaders of the Big Foundations and Open Societies is only possible with a completely naive denial of reality.”

Pope Francis recently reminded the faithful of such perennial dangers.

Speaking at his weekly general audience on Jan. 27, the 76th anniversary of the liberation of the Nazi extermination camp at Auschwitz, Francis said remembering is not only “a sign of civilization,” but also “means being careful because these things can happen again, beginning with ideological proposals that claim to save a people and ending by destroying a people and humanity.”

“Be aware,” he said, “of how this road of death, of extermination and brutality began.”

Responding to the Joe Biden Presid...