Growing in Devotion to the Holy Name of Jesus 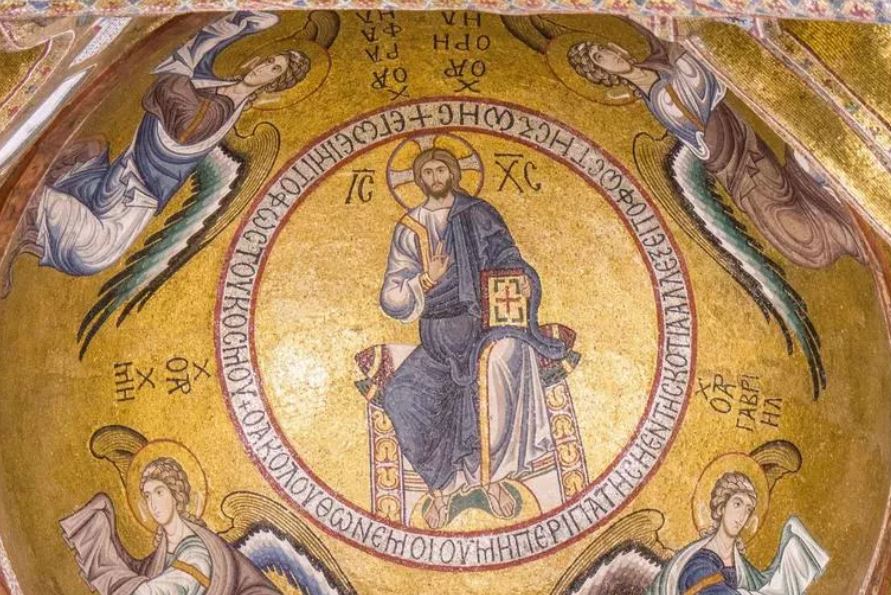 Growing in Devotion to the Holy Name of Jesus

COMMENTARY: To pray in Jesus’ name is to do more than finish our prayers by saying “through Christ our Lord.” It means to pray in communion with the person of Jesus, to turn to the Father together with the Son.

One of the fruits of the Year of St. Joseph just concluded was the opportunity to enter into his contemplative, hardworking silence and to ponder how the only word Scripture records him saying is the name of Jesus, pronounced eight days after Jesus was born at his circumcision.

“You are to name him Jesus,” the angel had instructed him in a dream, “because he will save his people from their sins” (Matthew 1:21). St. Joseph’s whole life can be summarized as a proclamation of that one word, Jesus, literally “God saves,” and as a participation in his rescue mission.

Earlier this week, on Jan. 3, the Church celebrated the Memorial of the Holy Name of Jesus, which was reinstituted by St. John Paul II in 2002 after having been eliminated from the liturgical calendar in the reform of the Mass that took place after the Second Vatican Council.

Traditionally the Church celebrated the Lord’s circumcision on Jan. 1, the octave of his birth, quickly followed by the celebration of his saving name on Jan. 2. In the reforms, when the Solemnity of Mary, Mother of God, was instituted on Jan. 1 and other changes made to the Solemnities of the Holy Family and the Epiphany and to the memorial of Sts. Basil and Gregory of Nazianzen, the liturgical celebration of the Holy Name of Jesus was moved to a votive Mass that a priest could celebrate at his discretion on open weekdays in Ordinary Time. That meant, sadly, that few priests, and fewer of the faithful, would mark it each year.

A proper understanding and invocation of the name of Jesus, however, is essential to a fully formed Christian life. Each of us, in our own way, is called, like Joseph, to relate to Jesus as savior and pronounce his name before others. The Memorial of the Holy Name of Jesus at the beginning of each new civil year can provide an opportunity for each of us to set our bearings to make it truly a “year of the Lord.”

We live in a secularist age that seeks to separate faith from life and ghettoize expressions of faith to private homes and houses of worship. Even within the Church, there is sometimes a powerful push for assimilation with cultural elites and conformism with prevailing ideas, such that we lose our distinctiveness, speak of Jesus less explicitly, and begin to behave and speak like a charitable association calling people to goodness rather than to God.

We see this when Catholic educational institutions speak of “values” and “traditions” instead of authentically Christian faith and morals. We find it when preachers barely touch on the Scriptures, fail to mention the name of Jesus or God at all, and focus rather about political, social or psychological issues. We deplore it when, somewhat scandalously, certain Church documents and major initiatives lack any clear connection to the Gospel and to the words, actions and person of Jesus.

In the Acts of the Apostles, the Sanhedrin, after flogging the Apostles Peter and John, forbade them “not to speak or teach at all in the name of Jesus” (Acts 4:18, 5:40), a prohibition that recurs in various countries today where Christians are not accorded religious freedom.

But in many places with full religious liberty, Christians do not speak or teach in Jesus’ name by choice or custom. These defects occur not necessarily because Christians are ashamed of Jesus’ name, but because many have become accustomed to thinking, speaking and acting in ways that are increasingly like that of the world.

That’s why it’s helpful for us to reflect on, appreciate, invoke and celebrate Jesus’ holy name. In biblical understanding, a name isn’t an abstraction or fundamentally a “thing” but is an identity and vocative meant to bring people into interpersonal communion.

When the Son of God’s name was revealed as “God saves,” it was precisely so that we could call upon, speak to, and recognize in Jesus our divine redeemer. It was meant to bring us into a life-changing “I-thou” relationship that would pervade all aspects of life.

This is clear in the Gospel. Jesus wanted us to pray in his name, promising that whatever we ask the Father in his name he will give us (John 14:13; 15:16; 16:23) and that whenever two or three are gathered in his name, he will be present in our midst (Matthew 18:20). To pray in Jesus’ name is to do more than finish our prayers by saying “through Christ our Lord.” It means to pray in communion with the person of Jesus, to turn to the Father together with the Son. The Catechism states that “the name of Jesus is at the heart of Christian prayer” (435) and “is the simplest way of praying always” (2668).

Jesus wanted us, moreover, to preach in his name (Acts 9:15; 9:27) and act in his name, giving the apostles the ability to work miracles, speak new languages and do exorcisms in his name (Mark 16:17; Acts 3:6). He called us to receive children in his name, saying that whenever we receive them we receive him (Matthew 18:5) and to be willing to sacrifice in his name, promising that when we give up family members or property for the sake of his name, we will receive a hundredfold in this life and eternal life (Matthew 19:29).

He warned us that we would be hated by all because of his name (10:22) and persecuted because of it (Luke 21:12; John 15:21; Acts 21:13), but through those sufferings, we would be more united to him and to his work, as those hardships would be pulpits by which we could more greatly witness to his saving mission. He said that we should know him through his name so well that we should recognize various imposters who would falsely invoke his name to deceive us and others (Matthew 24:5; Luke 21:8).

St. Paul urged them to have the same mindset as Jesus, who humbled himself to death on the cross but “God greatly exalted him and bestowed on him the name that is above every name, that at the name of Jesus every knee should bend, of those in heaven and on earth and under the earth, and every tongue confess that Jesus Christ is Lord, to the glory of God the Father” (Philippians 2:6-11).

The name of Jesus should, in other words, bring us to dedication, justification, faith, gratitude, sanctification of work, adoration and public profession.

In the history of the Church, Sts. Anselm, Bernard of Clairvaux, Henry Suso, Bernardine of Siena, John of Capistran, Ignatius of Loyola, and many other Jesuits, Franciscans, Dominicans, Carmelites, Augustinians and Carthusians have all helped to spread devotion to the holy name of Jesus through litanies, prayers, writings and devotions.

The first three letters of the name of Jesus in Greek — IHS — became a popular monogram by which people could visualize the name of Jesus, as those letters were soon put everywhere — on Church façades, altars, vestments, tabernacle doors, hosts, preaching tablets, banners and so many other objects to remind everyone of the name of Jesus — and in a Latin context were developed into the abbreviation Iesus Hominum Salvator (Jesus, savior of the human race), reminding us of what the name of Jesus means.

The month of January is traditionally dedicated to Jesus’ Holy Name. St. Joseph and our Lady, the apostles, and all the saints just listed are doubtless interceding that this month will be one in which we will seek to glorify and hallow that name, the only one “under heaven given to the human race by which we are to be saved” (Acts 4:12).

12 Reasons the Magi Were Actually...