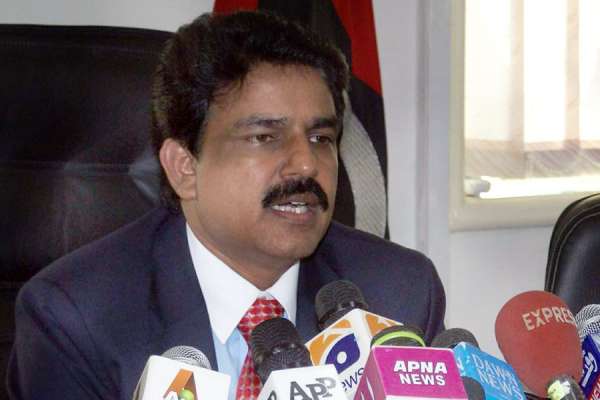 His relatives, collaborators, and victims of persecution praised his example and urged continued work.

“My beloved brother, Shahbaz Bhatti, was willing to risk his own life in his fight for the rights of religious minorities in Pakistan,” said Peter Bhatti. “He challenged the forces of violence and darkness who threatened him daily, and refused to be silent… Some of us must take small sacrifices in the fight for justice and equality. My brother Shahbaz Bhatti made the ultimate sacrifice of his life.”

“I am here to share that giving up and letting his enemy win is not an option. It is the duty of all of us to carry on his mission and vision,” said Peter Bhatti, who now chairs the Canada-based advocacy group International Christian Voice.

He was among the many speakers at the March 2 online memorial for Bhatti hosted by the Religious Freedom Institute.

Shahbaz Bhatti, a Catholic, served as Pakistan’s Federal Minister of Minorities Affairs from 2008 to 2011. He advocated for religious minorities and spoke out against the misuse of Pakistan’s strict blasphemy laws as a pretext to persecute minorities.

He faced increasing death threats in 2010 after he showed support for Asia Bibi, a Pakistani Christian woman who was sentenced to death for blasphemy that year. Bibi would remain in prison on death row until her acquittal by Pakistan’s Supreme Court in October 2018.

The assassination of Punjab governor Salman Taseer, another critic of the blasphemy law, took place just a month before Bhatti’s death.

At the time of his death, the 42-year-old Bhatti was the only Christian in Pakistan’s federal cabinet. He was gunned down by members of Tehrik-i-Taliban Pakistan while driving in Islamabad March 2, 2011.

In a video he recorded before his death, Bhatti had said: “I believe in Jesus Christ who has given his own life for us, and I am ready to die for a cause. I’m living for my community … and I will die to defend their rights.”

Bhatti has been declared a Servant of God and the cause for his beatification is under consideration.

His brother Peter Bhatti stressed the need to work to help people of all religions “live in freedom, peace and equality anywhere in the world” and to save minorities from victimization, intolerance, persecution, and inequality.

“I’d like to remind all of you of the value of the importance of human equality and religious freedom. Please do not take it for granted,” he said. “I humbly ask you to join us in our struggle to support suffering religious minorities in Pakistan and others around the world who continue to live in darkness and suffering. The vision, mission and legacy of Shahbaz Bhatti will continue to live forever. His sacrifice will not go in vain.”

Asia Bibi gave her own remarks, saying, “he helped poor women like me who were hopeless and oppressed. He stood with me and doing that he was murdered and gave his life. When I remember him I start grieving deeply.”

When she was in jail and heard of Bhatti’s assassination, she lost all hope. “Then I was encouraged by my Lord Jesus Christ and I got freedom,” she said. “I never can forget the martyrdom of Shahbaz Bhatti. Even today I grieve for him and my heart cries and my eyes weep for him.”

Lamenting that some Pakistani girls are targeted for rape, forced conversion, or forced marriages, she said the Christian community needs “heroes” like Bhatti. She urged others to come forward to stand against injustices, victimization, and persecution, saying, “Please help and support us.

Nephew David Bhatti said his uncle Shahbaz showed a charm and sense of humor. Although he “always radiated such happiness,” he carried grief over the unjustly imprisoned and the innocent people  killed at a place of worship by suicide bombers. He also agonized over villagers whose homes were burnt to the ground in attacks on religious minorities.

Bhatti’s dream of a world with dignity for all people, his nephew said, was “born through faith, the kind of faith that shines light into the darkness and conquers the fear of anything that stands in its way.” He showed a hope that “inspires and spreads like fire.”

Knox Thames, a State Department special advisor for religious minorities in the Trump and Obama administrations, reflected on Bhatti’s life and death in a March 1 essay for Christianity Today.

“It is rare to meet someone willing to sacrifice everything for a cause, a person who knowingly faces death out of obedience to God’s call to help others. With Shahbaz’s martyrdom 10 years ago, we lost a hero in the cause of religious freedom,” Thames wrote. “Compared to his saintly efforts, the work of mere mortals like myself feels inadequate and inconsequential.”

“Shahbaz lived an exemplary life, daily demonstrating heroic love of neighbor, speaking out for victimized religious groups in his home country,” he said.

Thames, who is currently a senior fellow at the Institute for Global Engagement, said that what individuals do matters. “Our humble contributions can make a difference,” he said, encouraging readers to ask God where they can act, whether locally or internationally.

Before Bhatti began his career in Pakistan’s parliament, he founded Pakistan’s Christian Liberation Front and the All Pakistan Minorities Alliance movement, which fought against blasphemy laws used to persecute religious minorities, particularly Christians.

Joseph Cardinal Coutts, Archbishop Emeritus of Karachi, had known Bhatti before he entered politics. He remembered him as “a great person loved by so many” and a “man of vision” who acted to combat discrimination against religious minorities. The cardinal said Bhatti’s work was consistent with the founding vision of Pakistan as having “equal citizens in a free country, in a democratic country.”

“The memory of Shahbaz is so strong. He was one of the finest Christian leaders we had. We miss him,” he said. Though the cardinal lamented an increase of “extremism” in Pakistan government and society, he added: “the memory of Shahbaz gives us hope to carry on, because there are problems everywhere and we cannot keep silent.”

Benedict Rogers, an East Asia analyst for the human rights group CSW, said Bhatti was “a modern-day martyr.” Every time Rogers visits Rome, he visits Bhatti’s personal Bible on display in San Bartolomeo all’Isola to spend time in reflection and prayer for places of persecution and religious intolerance.

“The best way to honor Shahbaz on this 10th anniversary is to renew our efforts to defend the rights of every single human being to live freely and in peace,” Rogers said in a March 2 essay published by UCA News.

Rogers had worked with Bhatti from 2004 to 2009, watching his rise from grassroots activism to member of the National Assembly to member of the National Cabinet. The two met with a seven-year-old Christian girl and her family after she had been raped and tortured. In 2007, the two helped reassure a Christian community threatened with forced conversion, and the feared attack from Islamic extremists never came.

“He fought for the rights of people of all faiths, for women and for a coalition to stand against extremism and intolerance,” Rogers recounted. “In his final months he was making headway, building relationships with Islamic clerics, visiting mosques, addressing large gatherings of religious leaders and bringing people together.”

Bishop David Malloy of Rockford, who chairs the U.S. Bishops’ Committee on International Justice and Peace, said his committee in 2009 helped arrange meetings between Bhatti and U.S. officials and lawmakers.

Malloy called Bhatti “a man of peace” whose work for justice was “cut short.”

“His death was part of his Christian witness to faith, to religious freedom and to toleration,” said Malloy. Though Bhatti showed “particular closeness” to the Christian faithful, he championed other religious minorities as well.

“He was committed to peaceful coexistence among the religious communities in Pakistan,” said the bishop. After his death, the U.S. bishops mourned his loss and wrote to the U.S. Secretary of State urging the U.S. government to work with the Pakistani government to protect the human rights and religious freedom of all its citizens, including religious minorities.

“May his sacrifice inspire the church in Pakistan and throughout the world to a peaceful but vibrant witness to Christ and to justice for all, even in the most challenging of circumstances,” said Malloy.

Justin Welby, the Anglican Archbishop of Canterbury, remembered Bhatti with “profound gratitude” for his courage and “extraordinary” moral imagination.

Ahmend Shaheed, United Nations special rapporteur on freedom of religion or belief, called Bhatti a “fearless defender” of religious minorities. Canadian MP Ruby Sahota gave a greeting and message on behalf of Prime Minister Justin Trudeau. Trudeau praised Bhatti, saying he “stood courageously for what he believed in.” He praised his “unwavering sacrifice against injustice.”

Gayle Manchin, chair of the U.S. Commission on International Freedom, said the commission had a “very close” relationship with Bhatti, supporting his religious freedom advocacy and then working with him in his cabinet role. The commission facilitated his visit to D.C. in 2009, introducing him to policy makers and giving him an award for his “courageous work defending the rights of all Pakistanis, especially religious minorities.” The commission knew the danger he faced. Bhatti “forged on and never wavered as a man of deep faith.”

Manchin lamented that Bhatti’s killers have never been prosecuted. She said violent extremism in Pakistan has increased since his death, as has its enforcement of blasphemy laws. She called for targeted U.S. sanctions against responsible government agencies and officials .

“Mr. Bhatti’s death was not in vain, and his legacy will continue to inspire and encourage us to keep pressing on until his vision is realized,” she said.

“He spoke out with clarity. He pushed laws that were important,” said Brownback. “Even though it cost him his life, he was willing to put that life forward, so that others could live in freedom. So that others could see the day when they weren’t as persecuted, as so many people around the world, and people in his native country are even today.”

Former vice presidential candidate U.S. Sen. Tim Kaine, D-Virginia, praised Bhatti for speaking out against blasphemy laws, saying in a letter that because of his courage, “he was tragically killed by violent extremists who sought to silence his calls for unity, tolerance and peace.

Former U.S. Rep. Frank Wolf said he knew Bhatti and admired him. Not long before his murder, Bhatti asked Wolf and his wife to pray for him. He called Bhatti a “giant” of the faith, and “one of the most courageous and dedicated men I have ever known.” He said Bhatti laid down his life for his friends, as Christ had taught.

“He knew he was putting his life in danger by advocating for Christians and other religious minorities,” said Wolf, who encouraged everyone to pay attention to Bhatti’s final profession of belief in Christ, the “meaning of the cross,” and his willingness to die to defend others’ rights.

Religious freedom in Pakistan has worsened in the 10 years since Bhatti’s death. The U.S. State Department has designated Pakistan as a “country of particular concern” for violating religious freedom since 2018. In January the advocacy group Open Doors’ World Watch List ranked Pakistan among the top five countries where Christians face the worst persecution in the world.