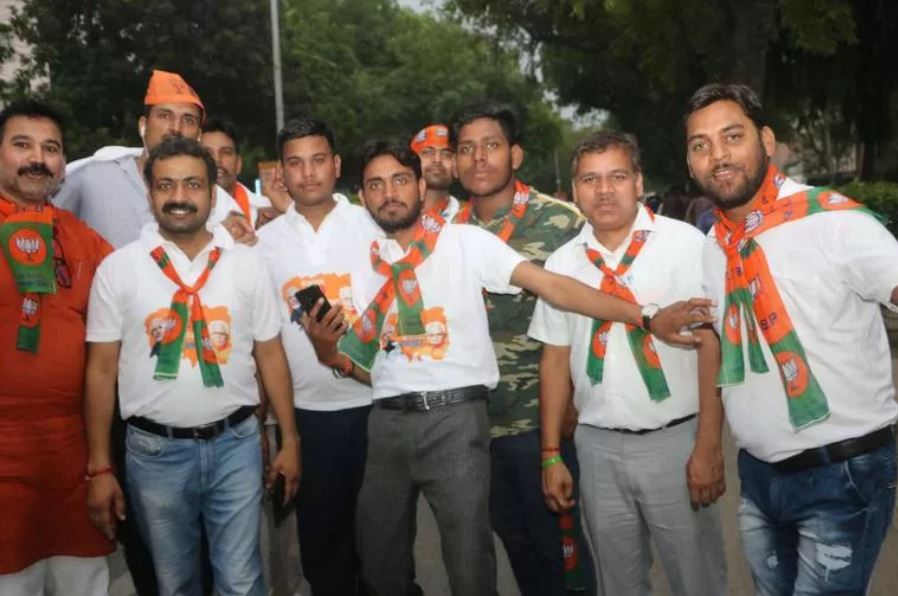 But the recent harassment of four Catholic nuns traveling on a train in northern India has undermined the BJP’s electoral efforts to portray itself as sympathetic to Christian concerns.

KERALA, India — Known for its antipathy to minority Christians, India’s ruling Hindu nationalist Bharatiya Janata Party (BJP) has made an unprecedented bid to seek the support of the Christian community in recent state elections — especially in the southern state of Kerala.

Voting has ended in four of the five states holding elections — Assam, Tamil Nadu and Pondicherry, besides the Christian heartland of Kerala — ending after five weeks of aggressive campaigning that began in early March. The votes will be counted on May 2 after the seven-stage polling in the other state, West Bengal.

Photos of Bishop James Anaparambil of Alappuzha receiving Giriraj Singh, federal minister in Prime Minister Narendra Modi’s cabinet, at his diocesan office on March 28 were featured prominently in Kerala media after the prime minister visited the bishop along with the BJP coalition’s Christian candidate Anoop Antony.

“We did not invite them. They just informed us over phone half an hour before and came. Since all political parties come seeking our support, we could not just keep them away,” explained Bishop Anaparambil.

The BJP-led Hindu coalition, which for the first time won a seat in the 140-member Kerala Assembly in the 2016 elections, have nominated a dozen candidates — including a retired police chief, as well as Alphonse Kannanthanam, the first Catholic minister in Prime Minister Narendra Modi’s cabinet — in Christian regions this time.

This ploy of the Hindu nationalist BJP — widely perceived to be condoning and even defending sporadic incidents of anti-Christian violence in the BJP heartland of north India — came to the fore when the election schedule was announced in early March .

Prime Minister Modi himself a made couple of visits to Kerala seeking support for the Hindu nationalist party, and he even quoted the Bible in his addresses. That boomeranged, however, with opposition politicians ridiculing Modi’s love for the Bible and indifference to tormented Christians.

Several other dioceses and even the headquarters of the Kerala Catholic Bishops Council (KCBC) in Kochi have hosted visits led by prominent national BJP leaders, drawing a massive coverage.

The Church’s reception of the media-savvy BJP visits, which included Cardinal George Alencherry, the president of the KCBC, welcoming BJP leaders to KCBC headquarters, evoked protests from some members of the Catholic community.

In an editorial, Sathyadeepam (Light of Truth), the leading Catholic weekly journal of the Archdiocese of Ernakulam, questioned the “silence and failure” of the local Church leadership to challenge the ruling Hindu nationalists, when they make courtesy visits, on the question of justice for victims of the Kandhamal bloodshed of 2008 and Modi regime’s continued imprisonment of 83-year-old Jesuit Father Stan Swamy, who was denied bail a second time at the end of March.

Despite the criticism, the BJP continued with its visits to Christian authorities, including non-Catholic denominations, proffering promises of favorable legislation to “protect” Christian interests in Kerala where the powerful Christian community accounts for more than 18% of the state’s 35 million people.

Contrary to its pro-Christian posture in Kerala, the Hindu nationalist party showed a very different face in the neighboring state of Tamil Nadu in mid-March. In its campaign manifesto in Tamil Nadu, where voting took place on April 6, the BJP aggressively declared that it will bring in an “anti-conversion law” and “ban cow slaughter.”

This brusque BJP declaration has to be understood in the context of the unequivocal public stand in opposition to the BJP taken by the Church in Tamil Nadu,  at a convention attended by top Church leaders.

“We have no confusion about what is the BJP agenda — the church has taken a clear stand on this. So, the BJP has taken a threatening stand,” Father Gnani Raj Lazar, editor of the leading Catholic weekly newspaper Nam Vazhvu (Our Life), told the Register from Chennai, the capital of Tamil Nadu.

In West Bengal state in eastern India, the BJP recruited a disgruntled senior priest of Kolkata Archdiocese, Father Rodney Borneo, to join its ranks publicly, shocking the minuscule Christian community in the state.

“I do not want to comment on what has happened,” Father Borneo told the Register following the Christian backlash over his startling endorsement on March 9. The endorsement occurred almost immediately after the priest resigned, without explaining his reasons publicly, as principal of Loyola High School in Kolkata.

“Father Rodney has not been heard or seen at all since joining the BJP,” Sunil Lucas, a prominent lay leader in Kolkata, told the Register.

Ironically, the same priest was organizer of a major Church protest against the BJP, which the Register reported in January 2020. “It is time for all of us to stand up so that the future generations will be able to enjoy the freedoms we have enjoyed,” Father Borneo told the Register at the time.

Meanwhile, the BJP’s support for Hindu nationalist zealots in northern India has undermined its efforts to portray itself as sympathetic to Christians, following the harassment of four nuns including two postulants of Sacred Heart Congregation during a train journey from New Delhi to Odisha on March 19.

The nuns were heckled and questioned inside the train by Hindu nationalists, accusing the senior nuns who were dressed in their congregation’s habits of “converting” the two postulants.

“Your Jesus cannot do anything to save you. Our gods are more powerful,” they heckled the nuns, and threatened to have them arrested for the “conversion’ of two postulants, Sister Usha Maria, the provincial of the Sacred Heart Congregation, recounted to the Register from New Delhi April 1.

At Jhansi, over 300 miles from New Delhi, railway police got into the train in response to the complaints made by the Hindu nationalist youth, and the nuns were promptly detained. More than 150 other Hindu nationalists also had gathered at the rail station to demand the nuns’ arrest.

“Only after we sent by WhatsApp the baptism certificates of the two, railway police released them after nearly four hours, with the intervention of priests from the Jhansi Diocese,” Sister Usha Maria added.

“Such incidents bring dishonor and shame to all of us, the law-abiding citizens of our beloved Mother India,” the Catholic Bishops’ Conference of India stated regarding the incident.

The Jhansi incidents — with both of the senior nuns involved hailing from Kerala — has proven a major setback for the BJP’s efforts to establish a foothold among Kerala Christians.

Although Amit Shah, the Modi cabinet’s powerful interior minister, assured at an election rally in Kerala that “action” would be taken against the culprits, Sister Usha Maria told the Register, “Nobody has apologized to us. The incident has created fear among nuns about traveling” in BJP-ruled states in northern India.

Instead of apologizing, other Hindu nationalist leaders offered various excuses including that nuns were attacked because of “improper dress.”

Such remarks provoked Markandey Katju, a retired national Supreme Court judge, to write a column in The Week national magazine defending nuns as “role models and Indian should learn from them,” as well as “respect them.”