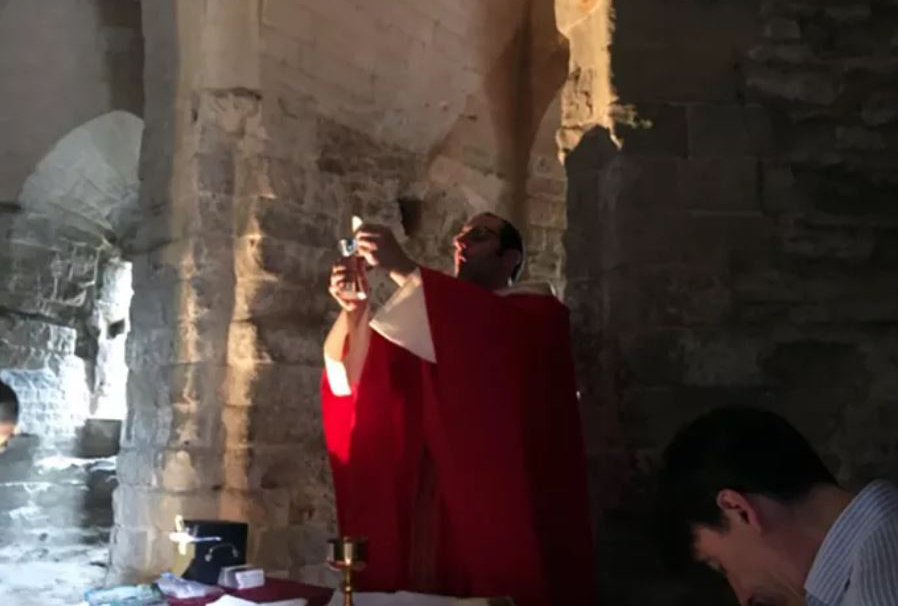 What it’s like to attend Mass in the cell where St. Thomas More was held prisoner before his martyrdom.

On it was a man with a hammer and a piece of paper. The man was dressed as a friar, Martin Luther. The paper was the Ninety-five Theses, freshly nailed to a church door. As we all know now, this was to prove a revolutionary act.

In London and elsewhere there were ceremonies in 2017 to commemorate the 500th anniversary of the Protestant Revolt, more commonly known as the Reformation. As I stood and looked at the poster, however, my mind drifted back to a ‘reformation commemoration’ of a different kind, one I had been present at just days previously.

It was one day on which I couldn’t afford to encounter delays on the London Underground.

It was June 22, the feast day of Sts. Thomas More and John Fisher. I was expected at the Tower of London. More importantly, I was due to attend Holy Mass in the cell where Thomas More had been held prisoner before his martyrdom.

Throughout my journey there, I was counting the stops, estimating the time it would take between each one until the train’s arrival at Tower Hill Underground station. While so doing, I looked again at the handwritten instructions as to where I was to go once there. I needed to meet a group of pilgrims, organized by Inside the Vatican Pilgrimages, and then be escorted with them to the cell.

Eventually, we pulled in at Tower Bridge station. Quickly, I exited the underground. Above ground, it was a blistering hot day. I made my way to the Tower of London’s Middle Gate skirting around the perimeter walls of the Tower to do so. My destination was just past Traitors’ Gate. I had passed that latter spot often over the years. Traitors’ Gate is where St. Thomas More entered the Tower as prisoner. Sometimes I like to stand for just a moment by the gate and pray in the midst of the many tourists milling about. As I do so, I often wonder if I would have had the courage of St. Thomas? Would I be prepared now to give up my life for what I believe? The question is never less than a sobering one.

That spot also marks the end of More’s London. The city where he had been such a success in almost every way had by then turned away as its finest son was put to the blade for being what we all would like to believe we are: true to our conscience.

If you come to the British capital, spend a day in More’s London. It is easier than you may think; much of the London in which he lived is still here. He was born less than a half-hour’s walk from the Tower on Milk Street. Further along from there, off Chancery Lane, are the Inns of Court where he practiced his profession as a lawyer. Some of the churches he worshipped in still stand today, St. Lawrence Jewry, for example. Down river, to the west of the Tower, lay the home he built at Chelsea – now long since gone. There he lived in a domestic happiness with his large family, and an equally large library, to say nothing of countless numbers of exotic animals roaming the grounds. Thomas More may have been a great Englishman, but firstly he was a Londoner. Nevertheless, the tracing of his steps is more than a tourist trip, however, it is also a lesson in the fleeting nature of all worldly success.

On arriving at the Middle Gate to the Tower, I found my group of fellow pilgrims. Soon after, a Beefeater, one of the colorful guards resident at the Tower, beckoned us to enter.

“You’ll have to be quick,” he shouted over the din of tourists coming and going.

We were led hurriedly through hordes of tourists to a small house with a neat lawn in front of it, just at the top of a flight of stairs. My companions were almost all North Americans, and looked equally like tourists. Glances from other visitors came our way, however, not least because, among our number, there was a Catholic priest, a Dominican, dressed in a fashion that the St. Thomases – both Aquinas and More – would have recognized. He had a rucksack on his back and a copy of the Aquinas in his hand.

We were ushered into the Queen’s House. This was built for an unfortunate woman, Anne Boleyn. When her house was being constructed, her lover, Henry VIII, was dismantling the Church across England, forsaking his faith and his lawful wife while all the time pledging his undying love for Anne. The house lasted longer than she did, however. In fact, before the house was completed, Anne had been beheaded just a few feet from where that house stands today. Here was another lesson in swimming with the currents of fashionable opinions whether they be of the heart, of the mind, or, the deadliest of all, of the soul.

Upon entering, the cell is more expansive than one might expect. It is still largely as it was in the days of the martyr. There may be room to move about but there is little natural light. The walls are thick and high. As perhaps a prison cell is meant to be, this is a depressing place, even more so no doubt when one is forced to spend days, months here, knowing that any freedom comes at the ultimate price.

Once assembled, the rucksack carried by the friar was emptied, and upon the cell’s only table linen was placed and an altar prepared, and, as the candles were lit, I touched the cell walls. Happily, I noticed dust from the cell floor already upon my shoes. Then a silence descended upon those gathered. And as it did so, we made the Sign of the Cross, and, while the candlelight played upon the ancient walls, we began…

The experience of Holy Mass in the cell of a martyr saint seemed all too brief. Soon we emerged from that cell blinking in the sunlight. It was hard in that moment to grasp the significance of what had taken place, and where so. Only now, much later, does that become clearer to me.

Soon after, my new friends departed. Alone, I remained for a time at the Tower. I sat before the small lawn leading to the door of the Queen’s House that leads back to the cell of St. Thomas More. I thought again about a willingness to suffer for one’s beliefs. I also thought of the long, lonely months More spent in that cell. I thought of the visits of Meg, his daughter, and, of Alice, his wife. I thought too of the loneliness of the days and nights when More held to the thing that everyone else was telling him was wrong when he knew it to be otherwise.

Eventually, as the evening approached, I rose and made to leave the Tower of London.

As I did so, once more I passed by Traitors’ Gate. As on any day, it was overrun with crowds. From far and near they had come to the Tower of London, to experience the history of the Tower, to watch the Tower’s ravens, to marvel at the Crown Jewels, so prominently and proudly displayed.

On that June day, however, I stood at the Traitors’ Gate of the Tower of London and glimpsed a different history, one with a distinct jewel, and with a still more beautiful crown than even that of the Crown Jewels.